The Diwali festivities have begun and taking lead in throwing a lavish pre-Diwali party was the designer duo, Abu Jani and Sandeep Khosla. Of course, the who’s who of film fraternity made their grand appearances at the festivities clad in style and with great sass. Karan Johar, Siddharth Kapoor, Rhea Kapoor, Shanaya Kapoor, Malaika Arora, Shraddha Kapoor and many more were caught on the glam cam. Check out the details here- Malaika chose to go truly ethnic for Abu Jani Sandeep Khosla’s Diwali party. She picked a black and golden outfit by Raw Mango and coupled it with traditional beautiful jewels from Satyani Fine Jewelry. With gajra in her braid and with airbrushed makeup, she drew out a perfect desi girl avatar. 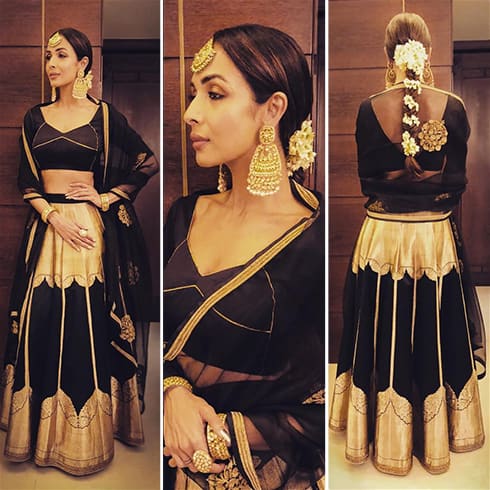 The new face of B-Town, Ananya Pandey, attended the Diwali festivities organized by Abu Jani and Sandeep Khosla in a multi-colored skirt and golden blouse by the designer duo’s label. With pearl based maang tika, she finished out her style. 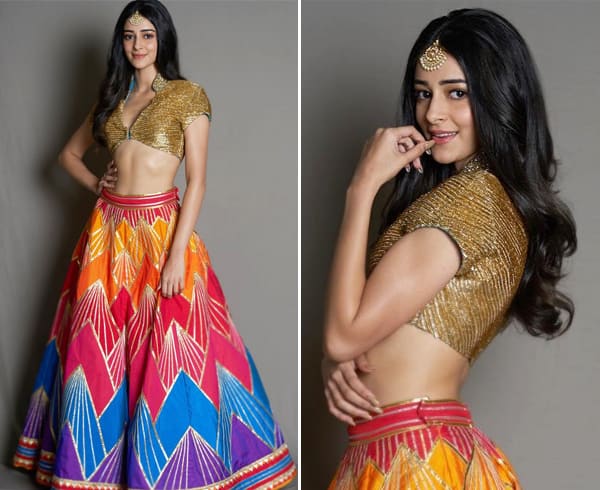 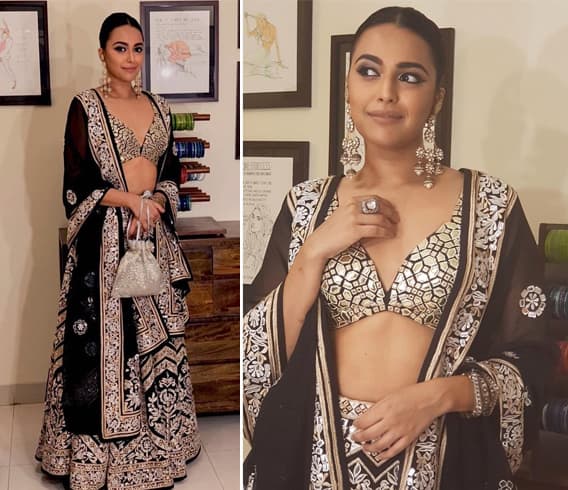 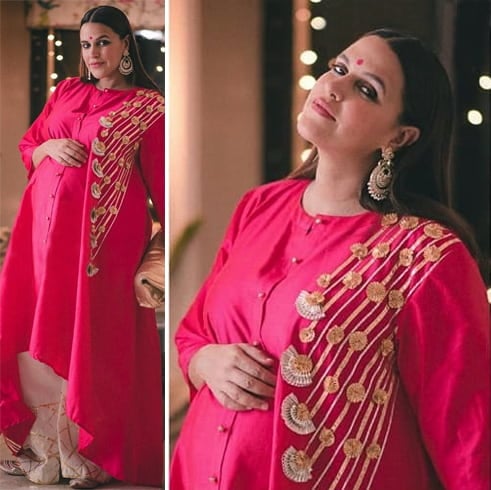 In a refreshing white and blue outfit by Abu Jani Sandeep Khosla, Shraddha made a grand appearance at the Diwali party hosted by the designer duo. Curls and a black small bindi finished out her adorable style. 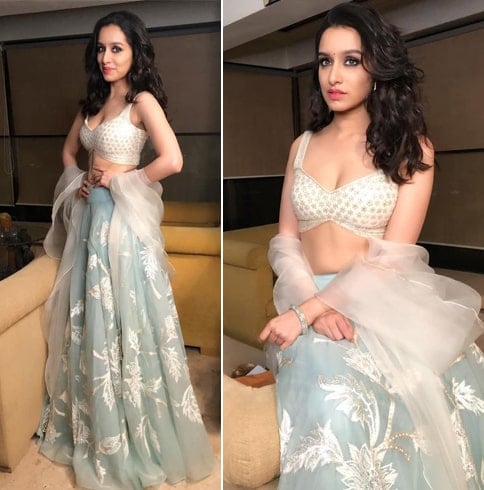 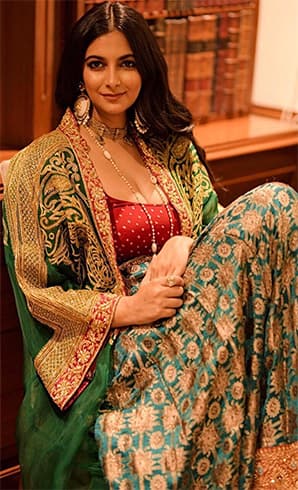 Diwali is coming to our homes this Wednesday but looks like Diwali came in quite soon at the B-town. The Bollywood took the splendid opportunity of this weekend to lavishly celebrate the Diwali with their loved ones.

Besides the designer duo Abu Jani and Sandeep Khosla, Shah Rukh Khan and Gauri Khan chose to throw a special party at their Mannat inviting their beloved friends from the film fraternity which included Aamir Khan, Katrina Kaif, Kareena Kapoor, Alia Bhatt and many more. 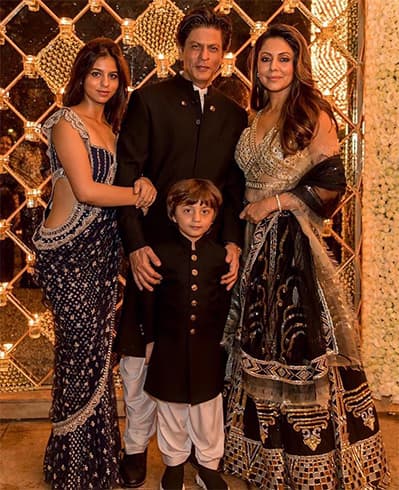 Since Diwali is yet to come, let us dig in for some festive style inspiration –

The hostess of the evening, Gauri Khan looked magnanimous in a black and golden Abu Jani Sandeep Khosla at the evening Diwali party. With her glossy makeup, minimal subtle accessories and wavy hairdo, she was the star of the evening. 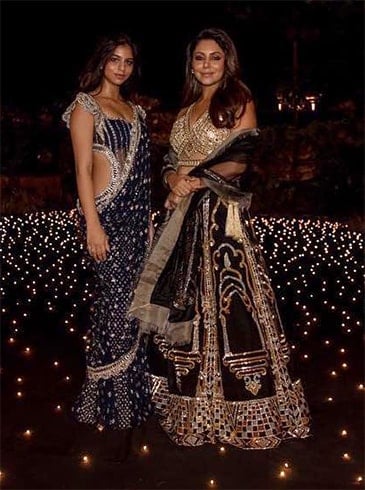 The word splendorous seems too small to describe the magnificence of the beauty of Malaika Arora at the SRK Diwali Party. In an emerald green mirror work lehenga with golden yellow velvet blouse by Seema Khan, she was one of the sparkles that lit up the evening. Satyani Fine Jewels by Maheep Kapoor was her choice for the evening and they were astonishing on her. A low updo and bronze-to-nude makeup rounded her style. 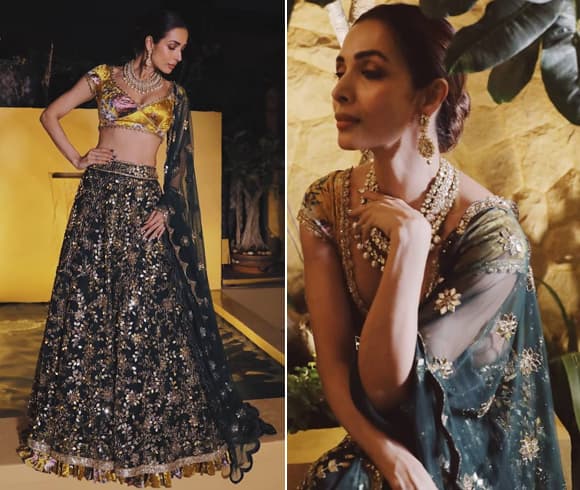 There is nothing in this world that beats the style of Kareena Kapoor. She is an epitome of an amalgam of grace, glamour, and attitude. In a black Anamika Khanna outfit with creamy white embroidered dupatta, she got a lot of heads turning her way at SRk’s Diwali party. Sunita Shekhawat Jaipur gems were her choice of jewels that added shine to her style. Bronze eye makeup, nude lips, and well-contoured cheek line looked good on her. It was all black for Katrina Kaif at SRK’s Diwali party. In a Sabyasachi western patterned sari with plunging neckline, full-sleeved blouse, she was breathtakingly gorgeous. A big solitaire style earrings, bronze glittery eye makeup, and her signature hairdo finished out her look. 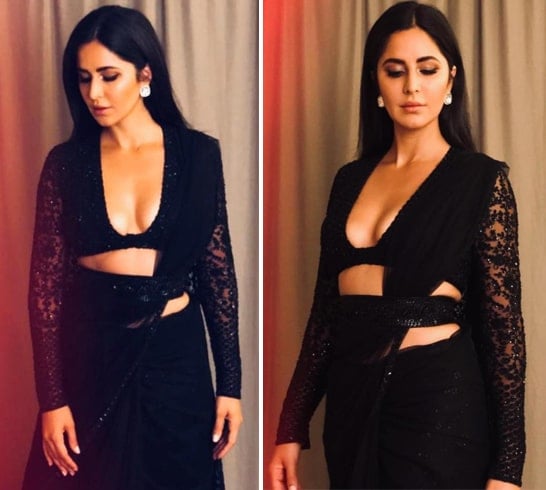 All golden was Sara Ali Khan, the Kedarnath girl at SRK’s Diwali party. In a sheer and shimmer golden Abu Jani Sandeep Khosla outfit, she shone as bright as the golden Sun. Glittery eyes, dangling jewelry and wavy hairdo looked good on her. 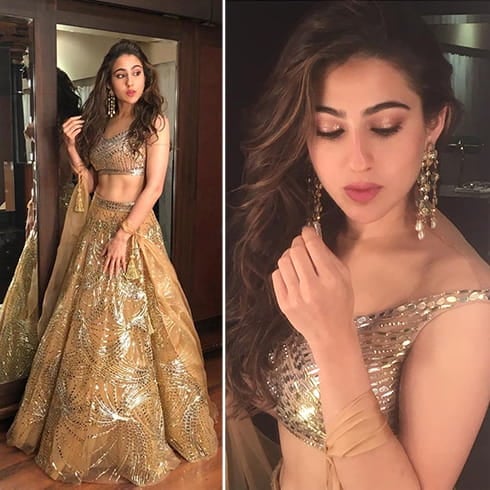 Amid all the glitter and shine, we spotted Juhi Chawla at the party doing a pastels style. In an Abhinav Mishra sharara suit, along with Dillano Luxurious Jewels, she looked peach sweet. 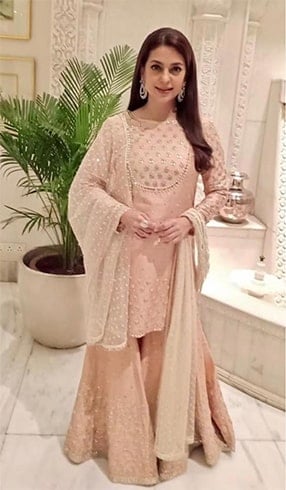 Along with her beau, Shahid Kapoor, Mira Rajput, who recently delivered a baby boy, worked her charm in drapes at the SRK party. In a classic black saree with falling shoulders blouse by Tarun Tahiliani, Mira looked every bit elegant and pretty. She chose to add emeralds from Jet Gems for her black avatar and we absolutely loved the choice. 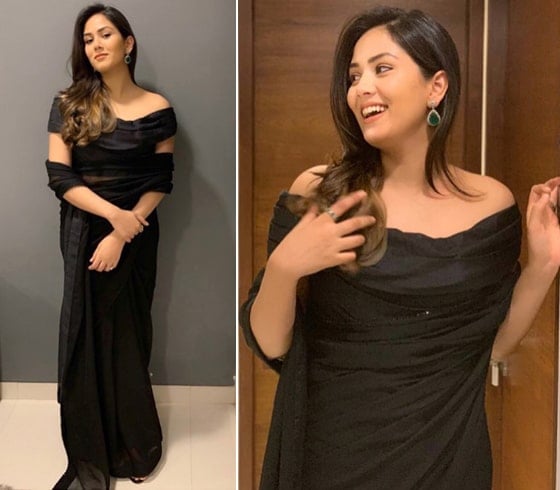 Looks like black and golden is the dress code for Shah Rukh Khan’s Diwali party. Shraddha’s choice for the evening was truly trendy and one of it’s kind. In a flowing asymmetric hemline skirt, a crop top and a dupatta by Kresha Bajaj, she looked spectacular. Smokey eyes and adorning Vanraj Zaveri jewelry, she drew out a lustrous style. 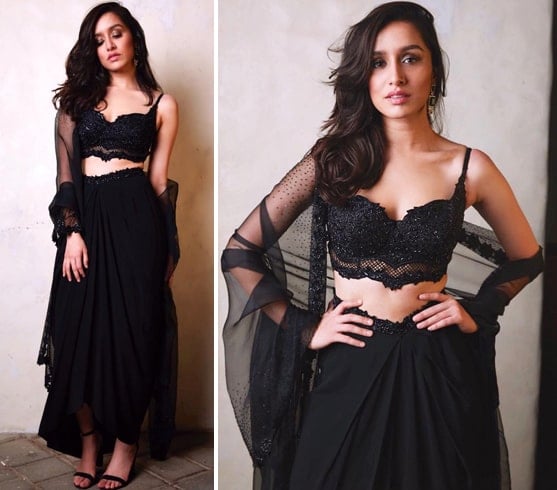 While most of the diva shone brightly in their black and golden styles, Jacqueline stood out in the crowd by donning a sky blue Arpita Mehta sari. Anmol Jewellers earrings and Jet Gems bangles, she looked absolutely exotic. Coral matte finished lips and volume filled hair, she looked gorgeous. 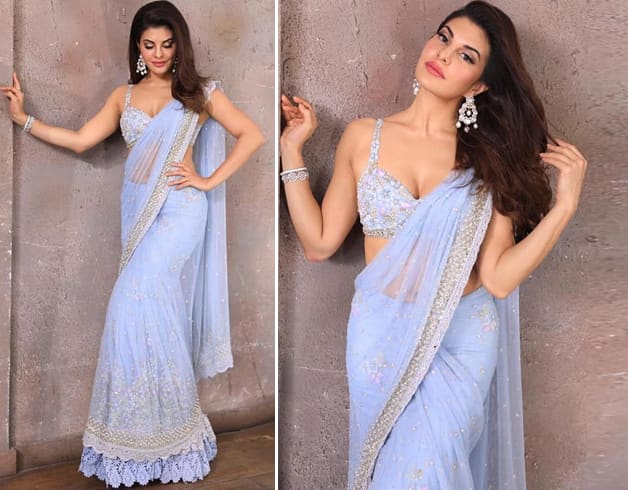 Young, beautiful, and talented, Ananya Pandey made an engaging appearance at the Diwali party at SRK’s residence. She picked a lovely heavily embellished blouse over a flowing cream toned skirt by Sabyasachi for the evening and carried it with immense grace and glamour. Loved that luscious chand balis! 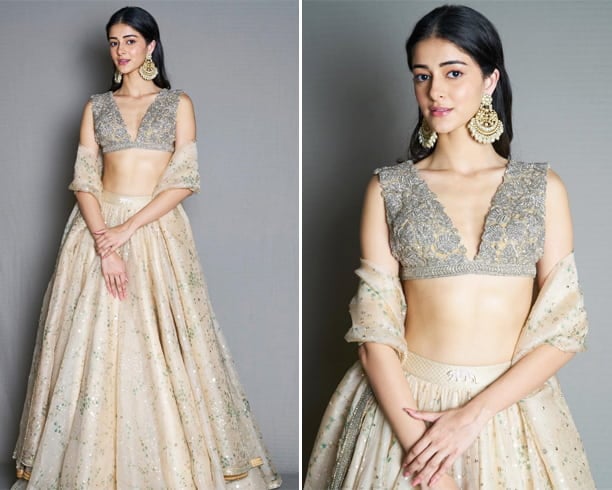 Wearing a strapless blouse and a shimmering sari by Shehlaa Khan, Kiara Advani was spotted at the Diwali party. Baubles from Anmol Jewellers and Jaipur Gems were her pick of accessories for the evening. A wispy updo, red hot lips, and kohl defined eyes were her finishing touches. 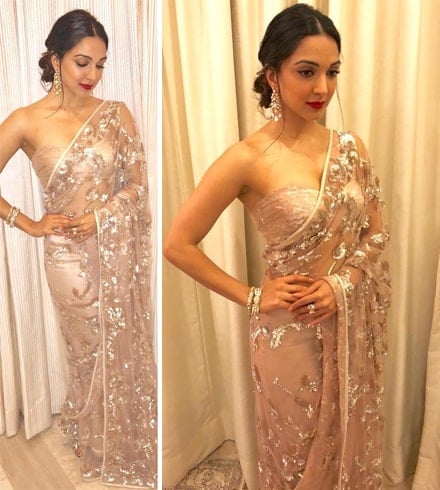 Another diva who was spotted rocking the light blue sari was Karisma Kapoor at SRK’s party. Karisma chose Manish Malhotra’s chikankari work sari and by keeping her accessories simple and fuss-free, she aced the style. 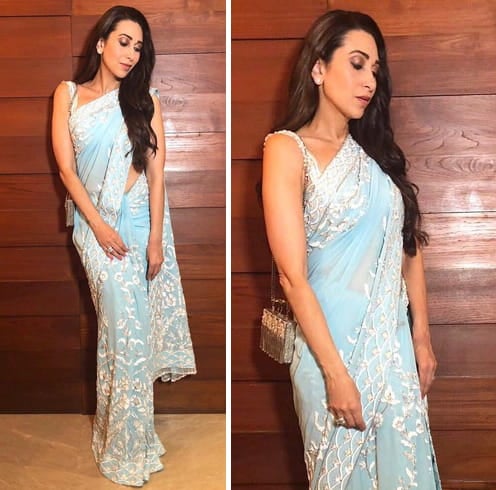 It was a delight to spot Kajol making a stunning appearance at the Diwali party hosted by Shah Rukh Khan and Gauri Khan. She chose an English colored suit by Fabiiana and paired with beautifully with Curio Cottage jewelry, the Pink Potli bag. Mid parted sleek updo and almost nude airbrushed skin rounded her style. Vidya Balan was in attendance to the Diwali party hosted by SRK and family in an olive green solid colored outfit by Punit Balana. By adding a printed dupatta, with a small bindi, a braided hairdo, and glossy lips, she looked lovely as the dew. 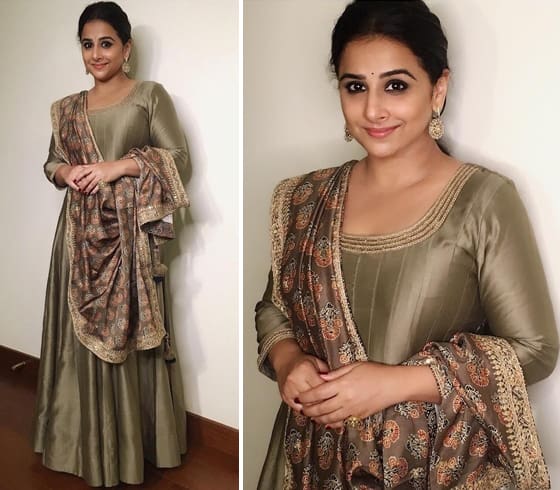 Another pastel style that was breathtaking was that of Sonakshi Sinha. In a flowing Zara Umrigar and sparkling Tyaanji silver jewelry, she was exotic. Nude makeup and wavy hairdo accentuated her look further. Shilpa Shetty is well known for her off-beat styles, especially the retro ones. She did one such killer style for SRK party and knocked us off our feet. In a Manish Malhotra cream and golden outfit, she drew out a bewitching style. Mid-parted wavy hair, glittery eyes, and nude makeup, she looked stunning. Pretty in pink was Preity Zinta at the Diwali party hosted by SRK and Gauri Khan. The heavily embroidered and embellished outfit by Dolly J Studio brought out her charm effortlessly. Side swept wavy hair, extravagant chand balis, and sweet blush toned makeup looked grand on her. Alia Bhatt did elegant, classy black ethnic style in Shyamal & Bhumika label for the Diwali party. Chunky Amrapali earrings were her sole companions for her ethnic avatar. Mid-parted straight hair, a small black bindi, and smokey eyes made her style timeless and ethereal. The nearly due, mom-to-be, Neha Dhupia was among the many other A-listers who attended the Diwali party. She picked a lovely white flowing gown along with a lace cardigan by Varun Bahl for the event. Braided, half pinned hair, her black box clutch, and dazzling jewels sweetened her style effortlessly. 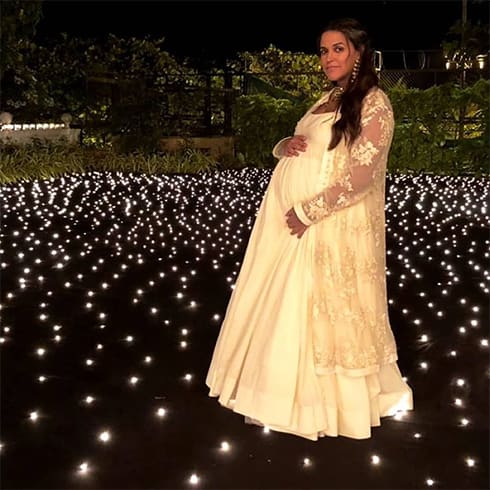 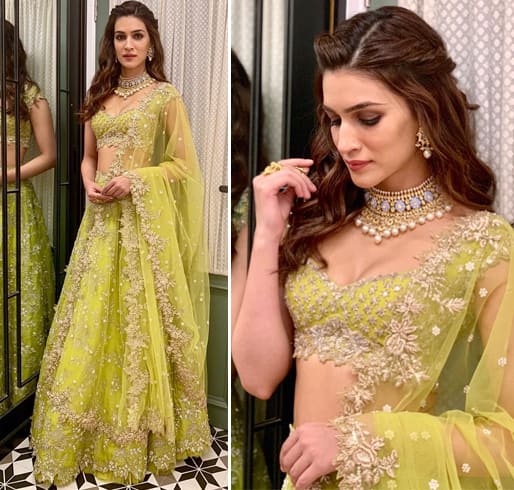 Shanaya Kapoor, the upcoming talent and beautiful daughter of Sanjay Kapoor, a dear friend of Suhana Khan was spotted at the Diwali party hosted by SRK. In an oyster gray Tarun Tahiliani outfit, she looked splendid in every frame. Blush makeup, mid-parted straight hair, and sparkling jewels rounded her style. 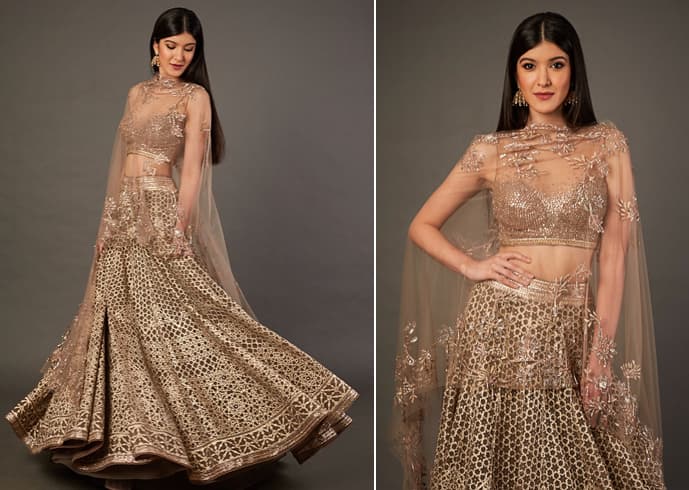 Hope you found enough inspiration to style up this Diwali. Happy Diwali one and all!

Top 5 Swimsuits That Look Best on Women With Small Breast

30 Geometric Tattoo Designs For The Creative You