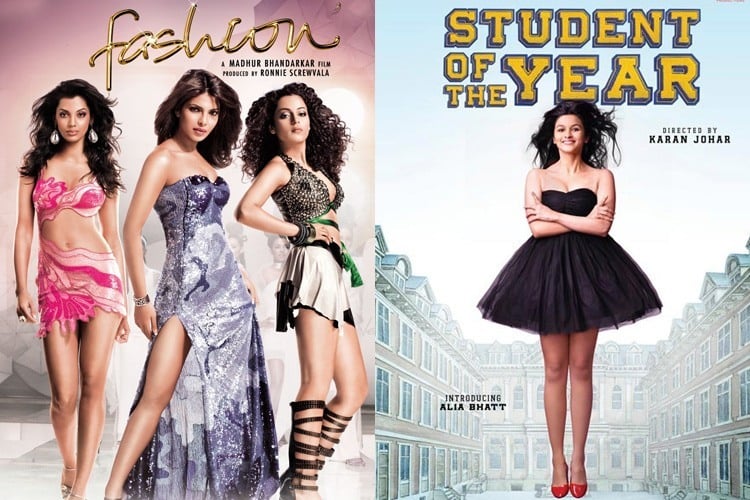 Bollywood movies are going places. Gone are the days when Govinda pants were worn with aplomb. Some of the movies that we picked up for this article gave us some major fashion goals-they introduced us to high-fashion brands, inspired us to wear crazy clothes and made us realize that Bollywood movies aren’t that bad, and sometimes they do have fashion sense! Check out some of the most fashionable Bollywood movies of our generation:

Aisha: The Jane Austen of Bollywood

They said that the movie was inspired by Jane Austen’s ‘Emma’ and the peculiar girls and sisters actually make us feel that we are in a Jane Austen book. But what makes this movie extremely fashionable is the fact that this was the first time Indian cinemagoers were introduced to high-end brands like Chanel, Salvatore Ferragamo and the likes. Most of the fashionistas already admire Sonam Kapoor’s fashionable choices and this movie catapulted her into the limelight as the Bollywood’s most fashionable.

Even though the movie was every bit non-tolerable, the stylish closets the women possessed in this movie made it a bearable one! Sorry Sonam, we love your style, but this movie was a disaster!

Fashion: All that Glitter and Glamour

The name and the movie took us to the glittering world of fashion and the ramp. The outfits were on point and so was the story. Through all that glitter and glam, we were also taken though a gritty world of drugs, booze and trauma. The movie was very impactful not only because of the storyline and the actresses’ wonderful acting but also because some of the most fashionable and stylish outfits and costumes were used in the movie. We got to see the real world behind all the glamour and the movie won several accolades too.

Dostana was quite a breakthrough movie, not only just in terms of the storyline (It talked about homosexuality, and one of the first ever Bollywood films to do so!) but also because the movie was shot entirely in Miami, thus giving us some of the greatest beach outfits ever! Fresh colours, fresh vibes and some really hot superstars. From Shilpa Shetty to Priyanka Chopra and the sizzling John-we give it all to your costume designer for coming up with these trendy AF outfits!

And you thought only the kids from High School Musical wore the best clothes! Student of the Year was Alia’s debut film and we sure are going to remember all that the newbies wore in this film! The big names in the fashion industry-Manish Malhotra and Shiraz Siddiqui were the costume designers here and they left no stones unturned to give the movie a chic, rich and very young look and feel. Alia who plays the rich, teen brat was seen in most of the high-end designer brands like Manolo Blahniks, Jimmy Choos, Prada and at one time she was seen carrying a Birkin bag! (Now we all know what the waiting time for a Birkin bag can be!)

Deepika Padukone looked her most stylish self in this romantic comedy with Saif and Diana Penty. The costume designer for this movie was the very chic and elegant Anaita Shroff and she gave the movie a very chilled out and stylish look. The USP of this movie was the use of fluorescent colours, tribal prints and mostly looks which would suit the ‘Boho Chic’ frame. Deepika’s avatar looked almost perfect with the costumes and outfits in this movie. She wore very less makeup but used chunky jewelry from Amrapali with a lot of élan. Cocktail is no doubt one of the most stylish movies that Bollywood has spawned!

Tips And Advice to Add Oomph to Your Next Selfie