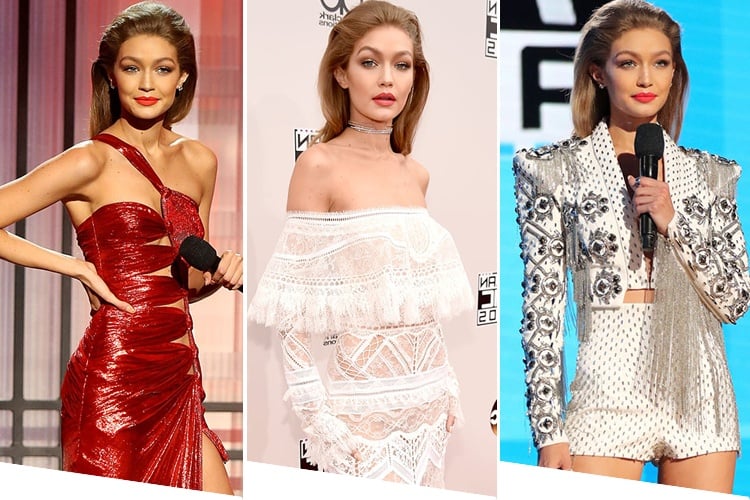 There are a zillion reasons behind the saying – a girl needs her options. One of the most valid explanation of the saying was champion of the ramp Gigi Hadid and her multiple looks, each outdoing the other, on the stage of the 2016 American Music Awards. Yes, people! If the AMAs of the year will go down in history for any other reason adding to the model’s infamous impersonation of First Lady of the United States in waiting, Melania Trump, that attracted a lot of back lash, it will be Gigi’s 6 changes of ensembles. Stylist Monica Rose invested much thought in gathering the best from the collections of the biggest designers in the industry, namely Roberto Cavalli, Julien Macdonald, Atelier Versace and played the A-game of fashion of the catwalker. Here are the looks that had us gushing over, hopelessly.

[Also Read: The Weekend That Was The AMAs]

The first impression of the first-time host at the music award night left the onlookers marveling, even before she busted out suddenly to pull a Melania. Accompanied by co-host Jay Pharoah, she took to the stage in a magnificent Atelier Versace gown. The asymmetrical hemline of the red dress accentuated throughout with Swarovski crystals sent the hostess’s mile long legs at full display. But beyond the rich texture of the fabric, the single strap dress featured some well-planned cut outs at the bodice area that brought out the sexy in Gigi. To turn the mood of the previous look in a 180 degree contrast, her second look comprised a very westernized blazer paired up with shorts. The white blazer was embellished with metallic studs and tassels and one can confidently call it a crop blazer on account of its unique length. The racy number was picked from UK based designer Julien Macdonald’s spring 2017 collection. This wasn’t Hadid’s first encounter with Macdonald’s creations. Earlier this year she was spotted at a Sport Illustrated event in a see through jumpsuit by the designer. 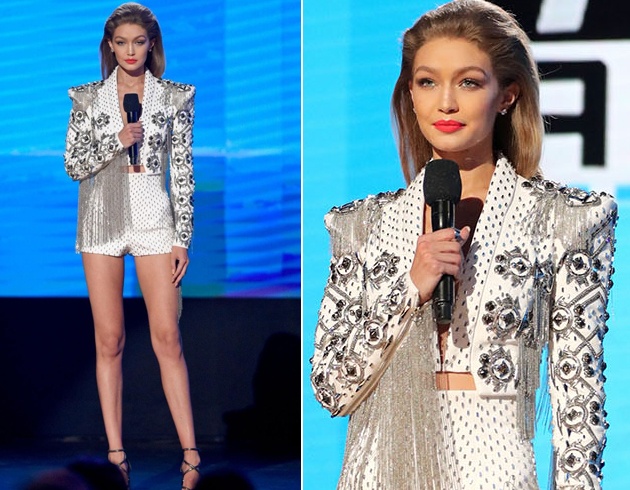 The runway rock star was totally at home while hosting in front of the who’s who of Hollywood and an equally vast audience body. She appeared on the state for a third time in a crocodile-like pleather dress that deftly showed off her fit body through some major cut outs. Yet another of Macdonald’s collection that the VS angel slipped into for the night and true to the texture of the number, she was a killer in the ankle length number with a matching choker. This one turned out to be lucky for boyfriend Zyan also, who happened to receive a kiss from his super model girlfriend after winning New Artist of The Year. Afterwards she chose to change into a full length black gown. Honestly – what is a glamorous night if you haven’t flaunted your beauty in the timeless shade of the black, for black it but the quintessential. The turtle neck ensemble by Lebanese designer Nicolas Jebran covered almost every inch of the model’s body, discounting a teardrop cutout at the center of her bodice. We couldn’t help but notice the sky high slit cut by the designer to make the most of Gigi’s never ending legs. To wrap up the show, she made a final appearance in a sparkly jumpsuit and closed the night with a bang. Interestingly, this was again a specimen of Atelier Versace’s creativity. Though loose on her petite figure, it cinched at the waist to give a shape to the overall. The almost see through attire was secured with a matching bra and briefs underneath to keep the look camera and lighting friendly. Here, as a bonus, is a snapshot of Gigi’s look at the red carpet. She was flawless in a Roberto Cavalli off-shoulder gown, illustrating how one doesn’t need to be the ‘Bride at the Alter’ to rock some white. 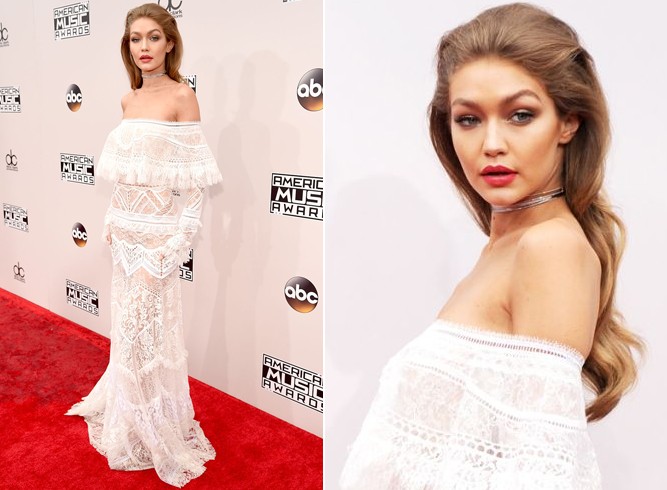 Here is a peek-a-boo into her rehearsals. She appears ravishing in her luxe yet lounge-y outfit designed by Juan Carlos Obando. Now it’s only obvious that the model would look like a million bucks while presenting the night, but exactly how many people envision her this way during rehearsals. I always knew, Gigi wasn’t even real – I am pretty sure, she is extraterrestrial.

Travel Handbag Roundup Of Our Celebrities That Will Cheer You Up

Wanna Look Fresh And Beautiful? Here’s What You Should Know

10 Cool Ways to Style your Shirt-Dress

9 Steps to get Sexiest Décolletage