Indian Fashion Blog
Home Events The Weekend That Was The AMAs – Overflow Of Over The Top... 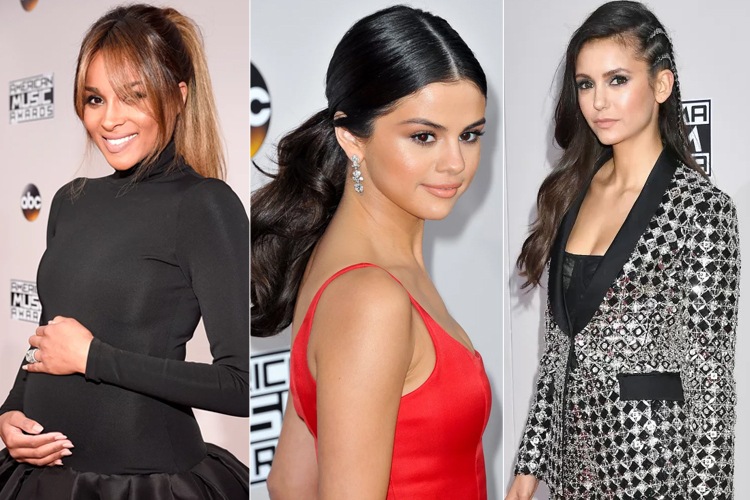 Howdy people!! All set for the New Year’s? Hold up! The year is not over till the best in the music industry get recognized by the American Music Awards. The Microsoft Theatre, LA witnessed an eventful evening last Sunday and here we are with all the style stories!

The Canadian actress and model was beaming is a black and silver jacket that she wore over a lace bralette for the event. The Zuhair Murad lattice embroidered blazer appeared elegant with matching shorts. Her smokey eyes and subtle make-up complemented the side swept hair do. 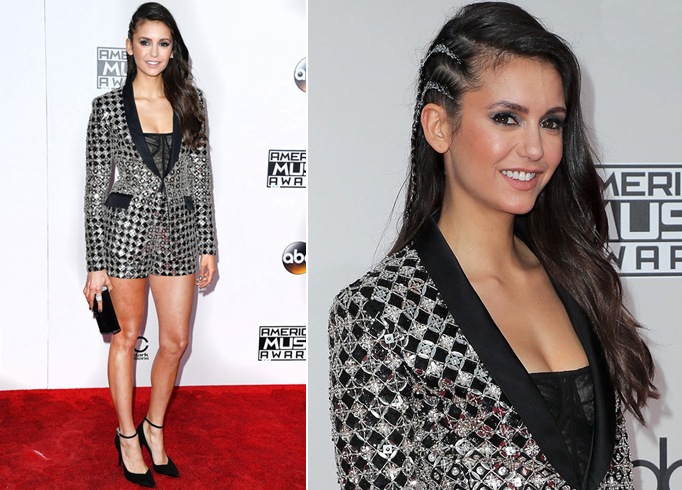 Among the very few who challenged the red carpet laid out at the Microsoft Theater Sunday evening was Keke Palmer. Her chainmail separates by Natalia Fedner was a throwback to Rihanna’s infamous CFDA Dress. The multi-faceted star, however, played safe and kept away from a peek-a-boo. Her choker stood an integral part of the entire look. We say, she would have been better off without that fur coat, but are guessing she was carrying it as a rescue against any wardrobe malfunction. 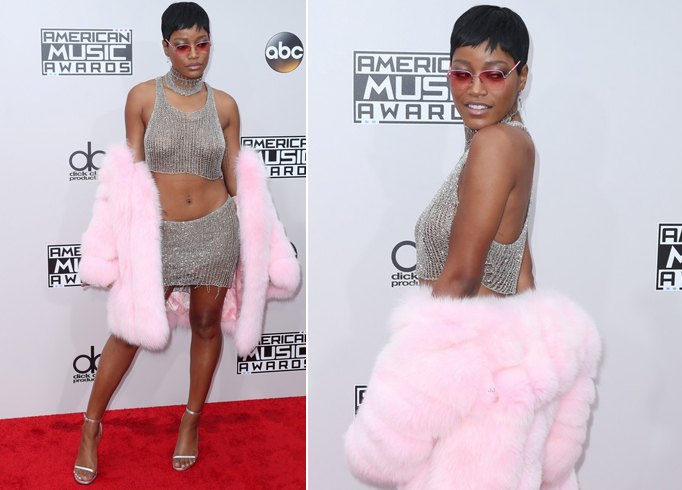 Pregnancy naturally bestows any woman with enchanted glow, and by the look of it, it is safe to say Ciara was benefitted of it amply. Her choice of wardrobe for the event was a massive ruffled gown by Giuseppe Zanotti Design. The high-low hem of the monochromatic number complimented the pair of black ballerina shoes was dramatic to the T on the red carpet. There is a reason this woman is a super model – she could just choose to arrive at the American Music Awards in her grandma’s curtain and still look prettier than my entire life. I doubt if this Roberto Cavalli gown would look half this glamorous on anyone else. The host of the evening was in line to a gamut of changes and this off-shoulder net gown in white was just the beginning. Chokers are all over the place so Gigi picked one up. 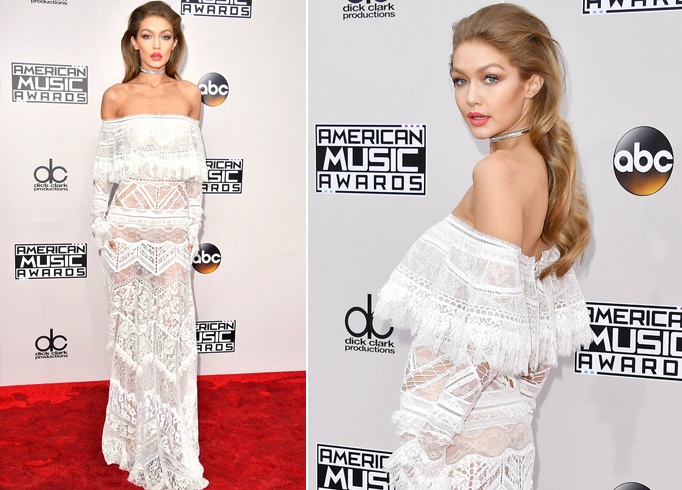 The very talented singer dazzled on the 2016 AMAs red carpet on a shimmery romper. The green Elle Saab creation did justice to her petite figure and the plunging neckline added the much needed sex appeal. But what we love the most is her screaming lipstick in the most pigmented shade of plum. At times, despite a helluva ensemble, it’s the basic lippy that uplifts you – we are loving you for this message, Hailee. The sheer black gown scattered with silver embellishment that the singer-song writer wrapped herself in for the evening was a piece of garment like none other. The off-the-shoulder Michael Costello gown certainly had a low key Coachella vibe to it– but no one seems to be minding that. The Angelina leg was brought into play through the major slit, but she kept herself miles away from the slightest chance of wardrobe malfunction by securing her attire with a back bodysuit. Her Alexander Wang shoes studded with crystals matched by outfit with perfection. Nominee for Artist of the Year award, the ‘Dangerous Woman’ didn’t stray away from her signature style. The high pony made its appearance to the AMA but with accentuations of tiny braids. Aren’t we all familiar of Ari’s love of the lace? So it was no surprise to her in a sheer crop top with a nude underlay. The vintage lingerie top was teamed up with ghost white Alexander McQueen pants. The diva didn’t miss to add a couple of inches to her silhouette by wearing a pair of chunky platforms. 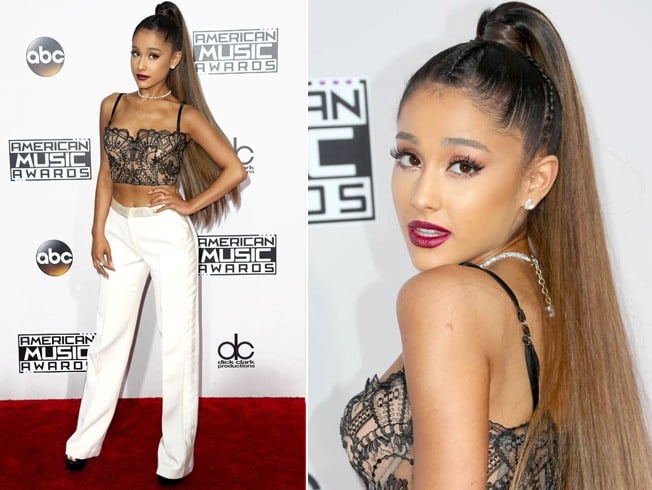 When they said there are no norms applied to AMA dressing, Bella took it way too seriously. Though her black bralette put her envy inspiring abs to full display, we just could get our eyes of her amber hair. Move over Kylie Jenner, Bella Thorne is here to tell us how to rock some over the top hues on our hair. Designer Anthony Franco did a commendable job with that shiny black blazer complete with patterned black trousers. 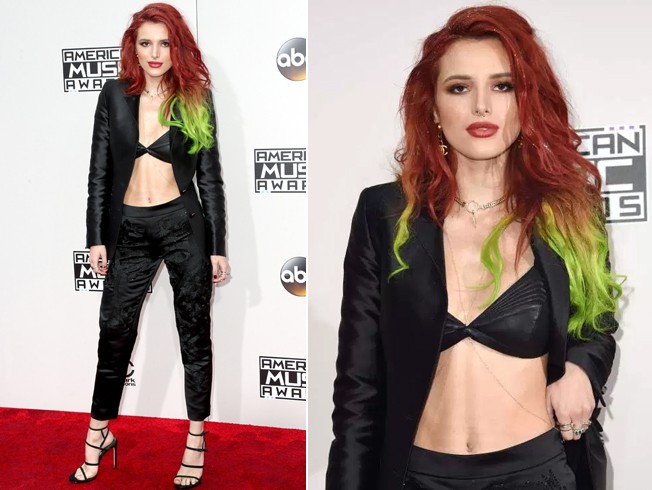 The night has rolled off and the awards have been taken home. You are free to scroll up again and brood over which of these celebs should have won the best dressed had there been an award in this category!!!

How To Fix Damaged Hair To Get Back The Sheen Back