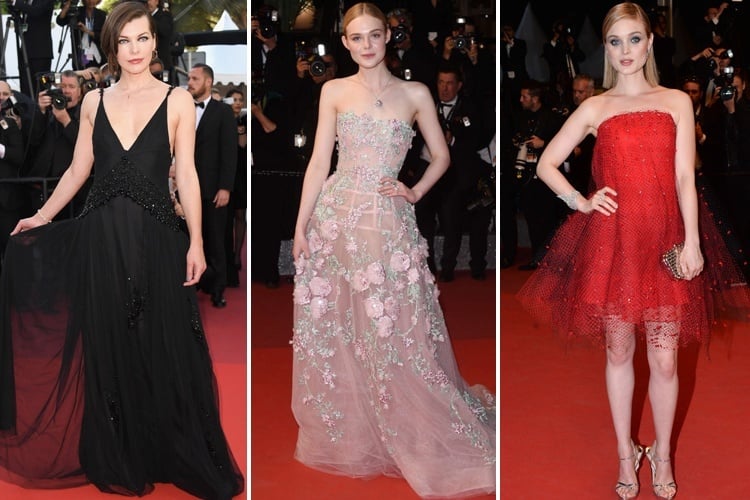 The longest celebration of fashion and movies by the French Reverie has finally come to an end and as the Cannes red carpet gets rolled off, let me present you the best of the final appearances.

The German actress looks elegant wearing Schiaparelli haute couture in the softest possible shade of lilac. She was immaculate in rounding up the look with Boucheron jewels. The hairstyle and make up were blending effortlessly with the mood created by the gown. Model Izabel Goulart was clearly inspired by Bella Hadid’s iconic red dress that will go down in history. But we are not even complaining after witnessing the model walk the red carpet in a stunning gown by Alexander Vauthier. Yes, with all its plunging neckline, non-existent back and high slit, the number indeed boasted some striking similarity to the gorgeous younger Hadid sister! However Isabel maintained her slit only till her thigh, versus Bella’s almost-waist-high slit. Rosalie Ross elegantly pulled off her classic midnight blue single-shoulder dress embellished throughout with dotted detailing. Her look was paired with loose waves, and a brown smokey eye with an equally classic nude lip made her appearance perfect. 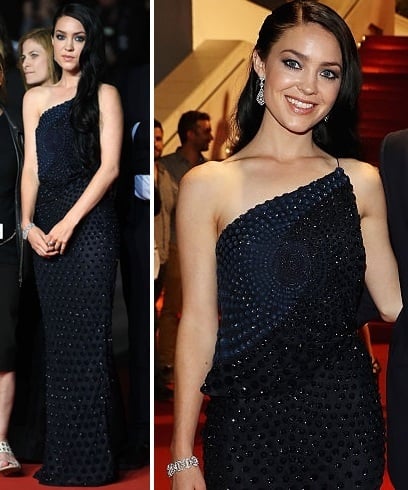 The Spiderman actress is famous for working out the feminine look, and yet successfully avoids appearing too dramatic of a drab! The nude and white Maison Valentino custom-made number which she rocked on the red carpet was just another manifestation of it. We are totally in love with the lace motifs lingering at the hemline of the actress’s gown. It was a good decision to add a pop of color to brighten up her lips. 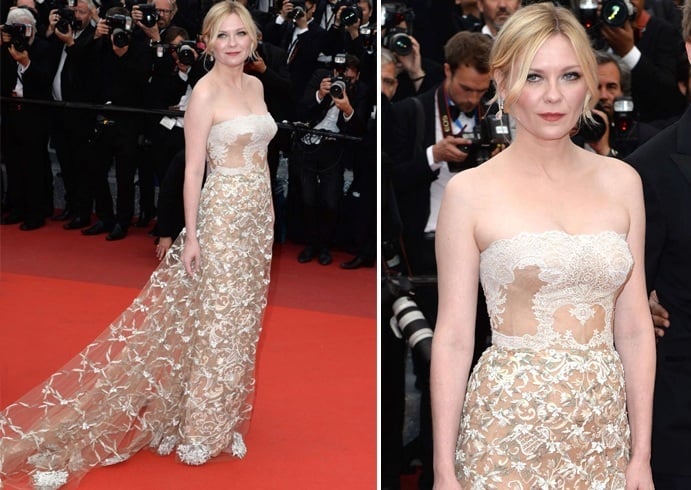 Alice was one of the celebrities who were trading the long trails for modernized ankle-length dress on the red carpet. Accompanied with great style and comfort, this Dior number donned by Alice Isaaz is an undisputable winner at the evening. Especially that plunging neckline which was successful in drawing all eyes at her complete with the to-the-point hair-do and flawless make up didn’t disappoint the shutterbugs. 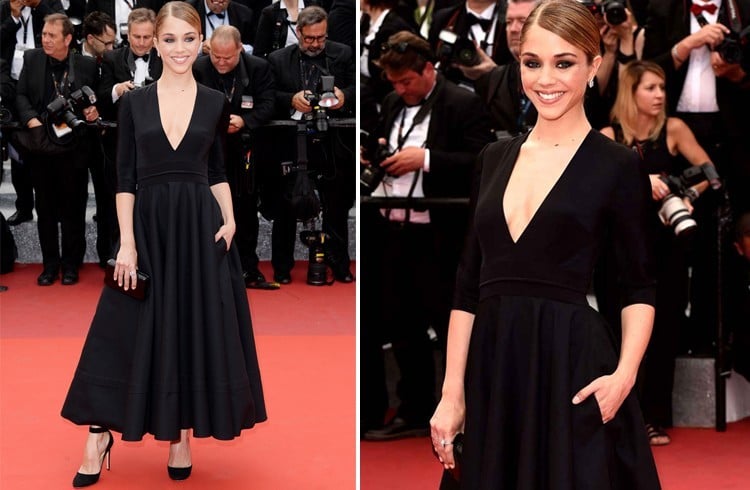 Elle made a wise decision yet again by opting for Zuhair Murad. The strapless gown in the lightest hue of pink detailed with floral applique cut a tremendous figure. She was demure in a neat slick back hair do and a delicate neckpiece. The actress was a manifestation of supremacy and confidence in her black Prada gown. Plunging necklines have become staple to glamourous red carpet so we won’t even talk about it anymore. But the beaded bodice was certainly unique and the source of all admiration that this number got. The almost invisible neck piece and a simple gold bracelet was more than enough to accessorize the actress’s red carpet owning look. Keeping it safe with black, the British crossover singer’s appearance was calm and soothing in her Christophe Guillarmé gown. The lacey upper and lower half of the creation, separated by a velvety opacity kept the singer modest at the red carpet. We are totally in love with the green clutch and its multicolored embellishment 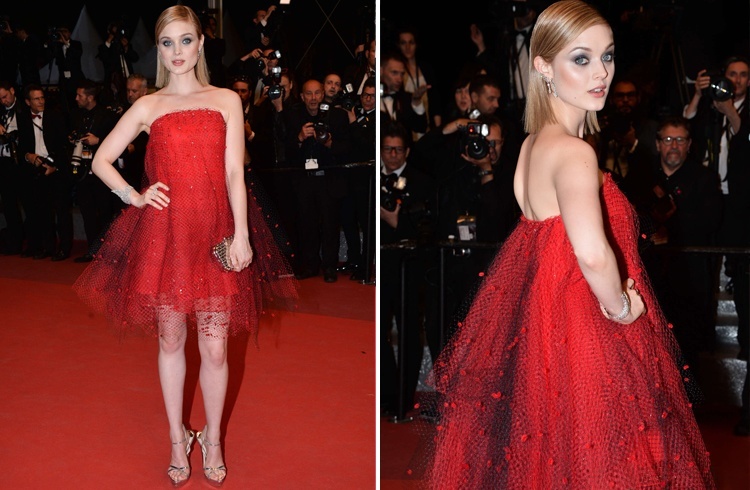 Alessandra was a piece of mirror work herself, though her wardrobe didn’t feature any mirrorwork at all. The Zuhair Murad gown in silver comprised a high slit skirt that revealed silver lace hose wrapping itself around the Brazilian model’s legs. One of the final appearances that caught our fancy was Zeina Nabulsi who was wearing one of her own designs. The multi-tiered gown had everything, floral prints, lace hemline and tons of flower, as it appeared, scattered across the dress. The talented Jordanian designer certainly knows her game well. 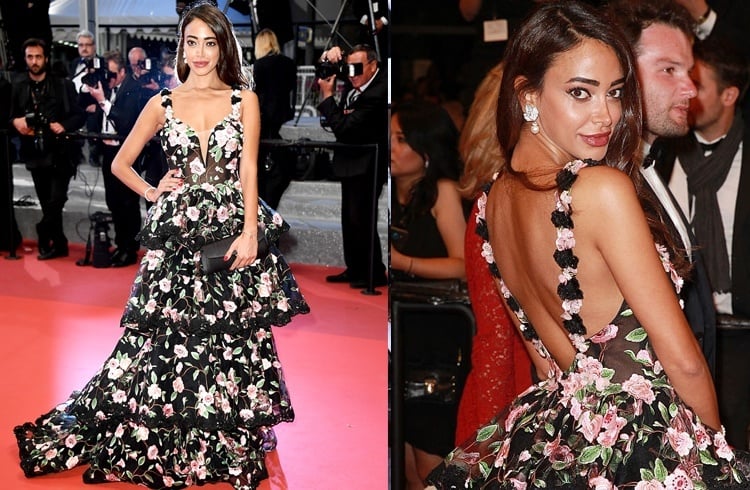 Zenia’s tiered dress didn’t fail to impress Ava West too, since we spotted the British actress in a similar creation by the designer on the closing ceremony of the Cannes film festival. The all black gown covered with 3D floral embellishments sat magically on Ava and we couldn’t just get enough of her appeal. 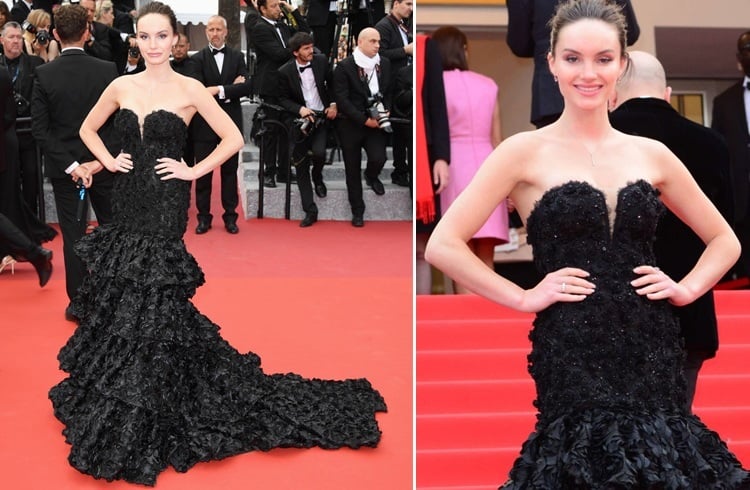 And that’s about it from the Cannes this year. We can’t even describe in words how eventful this highly anticipated festival was. We hope to have presented you with all the eye catching ensembles that crossed the unforgiving yet prestigious red carpet laid at the Cannes.

Check Out The Best Of ‘Who Wore What’ During The Week

Tanzanite Jewellery: The Rare And Stunning Stone Of Magic

Fashionlady - September 1, 2014 0
The 2014 Emmy Awards came just in time to nothing but sunder the snoozy summer vibe which was pretty evident from the red carpet...