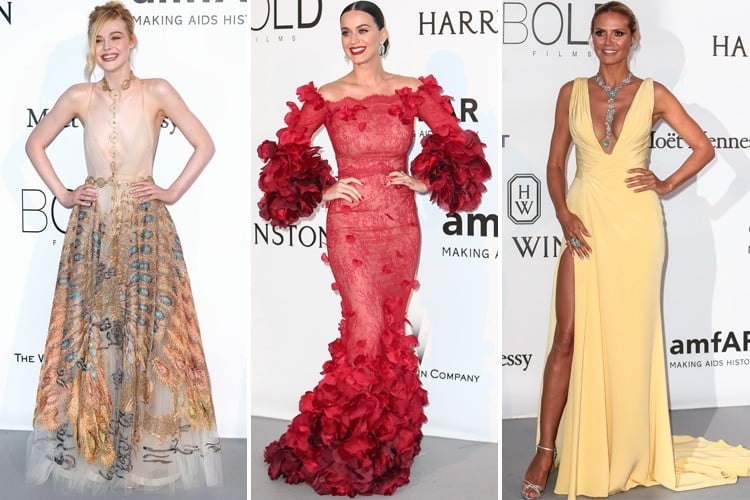 Day 9 of the Cannes Film Festival, 2016 saw the screening of Xavier Dolan’s movie ‘It’s Only the End of the World’. And to watch the show the starlets marked their attendance dressed textural dimension across the red carpet. Celebs like Alessandra Ambrosio and Elle Fanning picked Zuhair Murad’s fanciful creations. The evening was all about high slits.

The actress from India has fashioned her red carpet style for the Cannes with prolonged deliberation, and we couldn’t be more impressed. She was again one of the best dressed women, exquisite in her Ralph and Russo gown. She picked her earring from an upscale Indian brand Kalyan Jewellers. 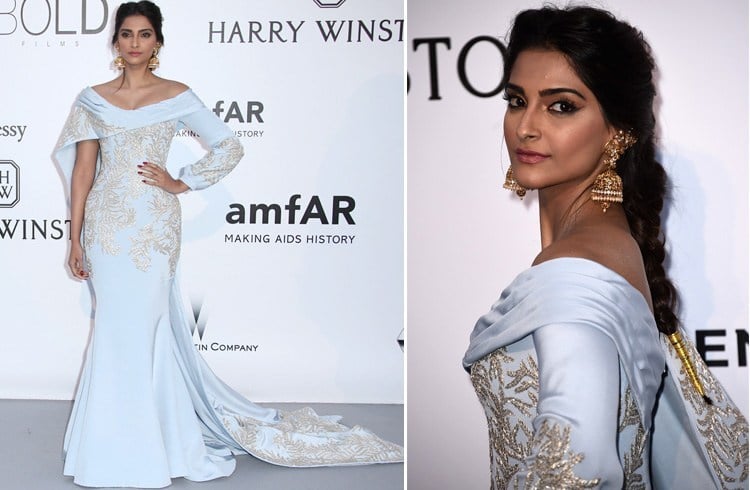 Karlie was seen again in one of her best appearances. We can’t even describe in words how much we are digging this Marchesa dress. Can we just talk about the detailing of the off-shoulder neckline of this black number? The floral embellishment with a thigh high slit were complimented with Chopard jewels. She also carried a Judith Leiber clutch, and completed the look with Giuseppe Zanotti heels. 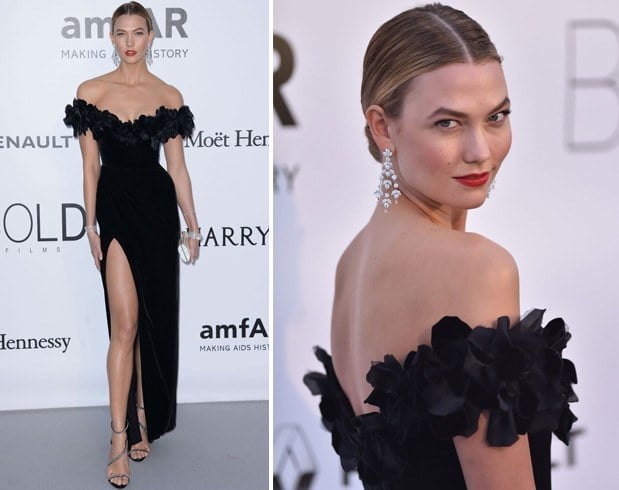 Another celeb who was influenced by floral 3D embellishments was Katy Pery. Her Marchesa red dress had petal-esque embellishments sewn across the sleeves and lower end of the piece. She rounded up the look with some heavy Harry Winston earrings and Giuseppe Zanotti sandals. Ace actress Uma made some kind of statement in her fuchsia, single strap dress by Elsa Schiaparelli. The heart shape brooch holding her sleeve to the gown was a definitive accessory, but it worked fine. 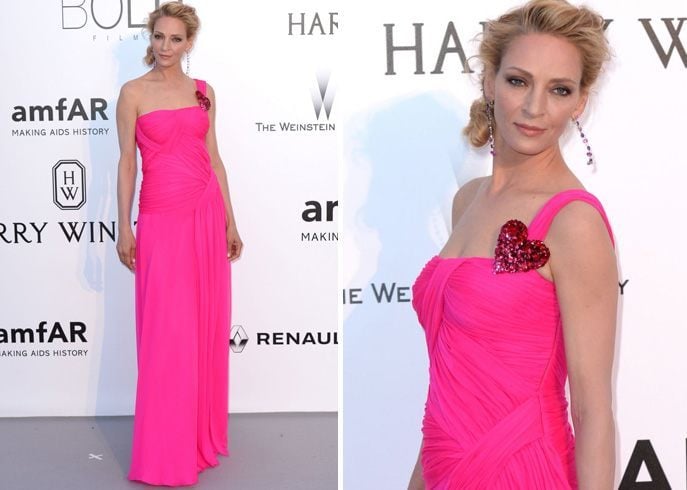 The actress perfected the look of a dancing peacock in some remote forest, yet she was not all loud about it. The Valentino creation was certainly a piece beyond worldly acknowledgements. The Brazilian model has already stirred up some fashion conversation with her one after the other excellent looks at the Cannes. This evening she was spotted in a Redemption dress added with Boucheron jewels. 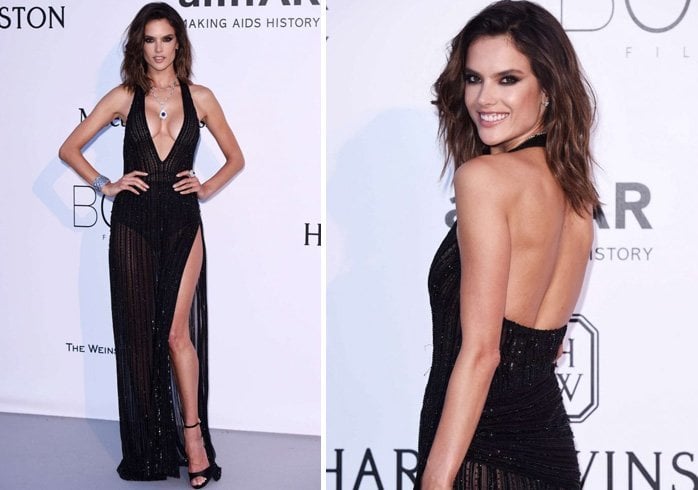 American fashion model made all heads turn when she walked across the carpet in this chainmail dress by Marchesa. Her off-shoulder dress with its mermaid like structure was rounded up with an up do in the hair department.

The German model left us with no words. She was absolutely amazing in a Versace dress in the buttercup shade with a thigh high slit. Her Giuseppe Zanotti shoes that matched the dazzling and unique Lorraine Schwartz were also the perfect selection for the occasion. Helen had proved time and again that she is a legend. This evening she was a queen with her long a Temperley London dress boasting some outstanding mirror work. The jewelry by Harry Winston jewels echoed the air of royalty. Cannes is famous for its international attendance. Keeping up with the tradition, the festival was attended by Czech model Karolina in a Giorgio Armani Privé dress. The lavender mini dress was teamed up with Tamara Mellon strappy heels. Once again Harry Winston jewels impressed us. 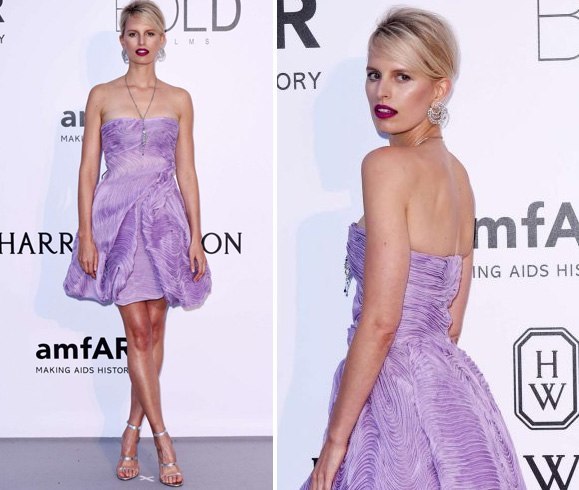 Lily dazzling in her Miu Miu gown. The full length featured some bejeweled detailing at the upper body and the British fashion model pulled it off accurately. Jewelry from Bulgari highlighted the look too. Another English model to rule the carpet this evening was Rosie. Wearing a Galvan dress in a mixed shade of silver and lavender, she was flawless for the screening. Her Chanel Fine Jewelry and Bulgari clutch stood as best decisions too. 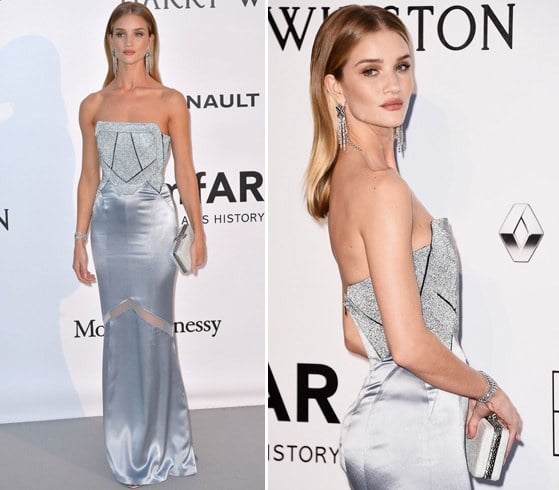 Models and actress who flew in from all over the world were not at the Cannes to dress up in an average floral frock. We have witnessed some scandalous high slits at the 69th Annual Cannes Film festival. The nine days stood true to the anticipations. Just a day left and we are sure the best has been reserved for the last. Don’t miss to check out tomorrow’s compilation.

DIY Winter Fashion Ideas That Saves Your Money And Keeps You...

5 Reasons Why Aishwarya Rai Is Still The Queen Of Bollywood

Fashionlady - December 30, 2013 0
It's criminal to celebrate New Year bash without a dose of fashion. Your vogue religion should not allow you to step outside on 31st...