We are already in the second half of the universal celebration of fashion that goes by the name of Cannes Film Festival, and let me know if you too feel the same – we can’t get enough of it. Well, keeping with the tradition, let me show you the best snaps from the sixth day of the carnival, as you can say, held by the French reverie.

Actress Sonam Kapoor stunned her fans again. She looked beautiful and stood tall in a champagne gown by Ralph & Russo. The Indian actress did add the gown with a floral cape and this addition brought a lot of charm to the dress. With the camera flashing at her, the brand ambassador of L’Oreal was not the least shy to pose at the screening of Loving. 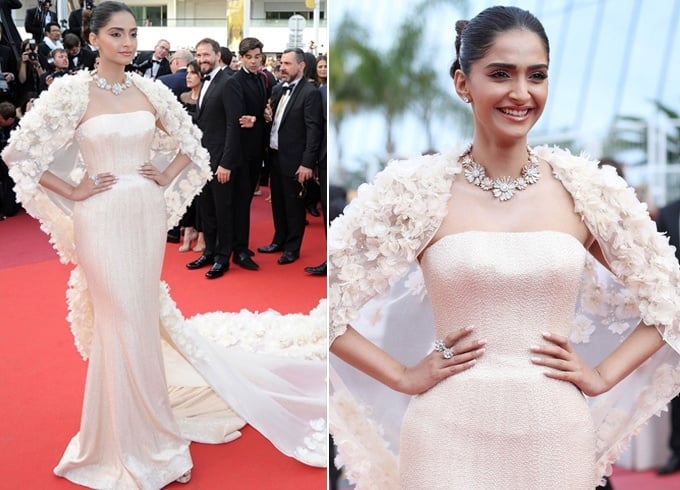 The Brit model made all heads turn and fixed on her when she walked in looking all superlatives of ravishing in a red single shoulder floor length gown. The 42 year old matched her Halston dress with chunky earrings and a big ass bracelet. 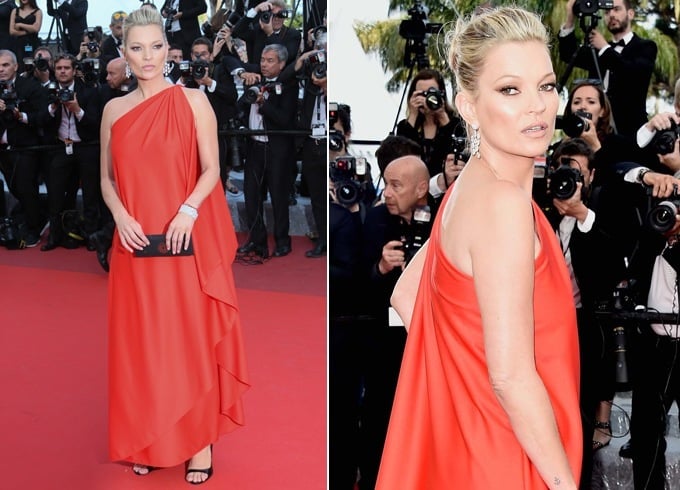 The 30 year old famous British American actress was seen on the 6th day of the film in an unmatchable flared gown from Georges Hobeika Spring 2016 collection. The otherwise opaque gown had a sheer detail at the neckline that endowed it with a special air. 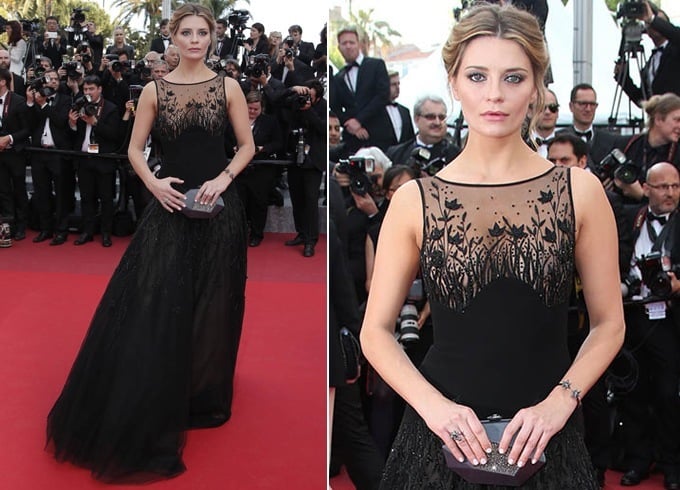 Spider-Man fame actress marked her presence at the festival dressed in a stunning white Dior Couture. Keeping the look simple she wore her bob side swept with a pop of bright red on the lips. Yet another model-cum-actress from Hollywood who doubled the heat on the red carpet was Angela Lindvall in her Zuhair Murad red gown. The dress had a sheer full sleeve bodice but that never-ending slit was a killer. The rest was taken care of by her lightening smile. 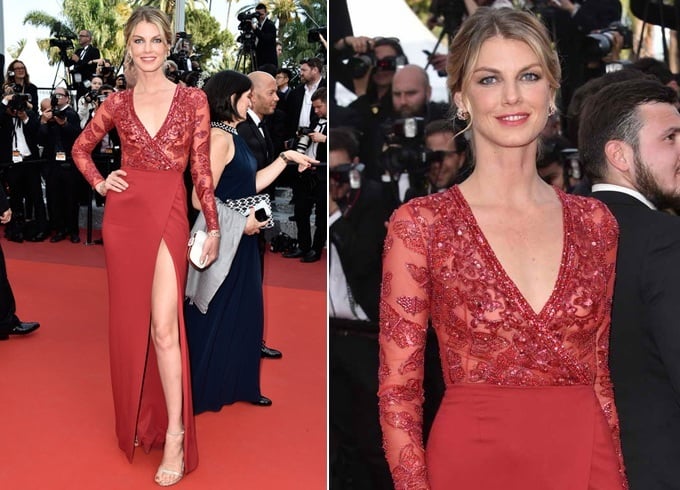 Kristen has been repeatedly making one after another show stopper appearances at the Cannes red carpet this year. She came in with yet another sophisticated in this black Chanel dress that look more of a full length pencil skirt matched with a top than a gown. Using jewelry by the designer, she rounded up her look with perfection. 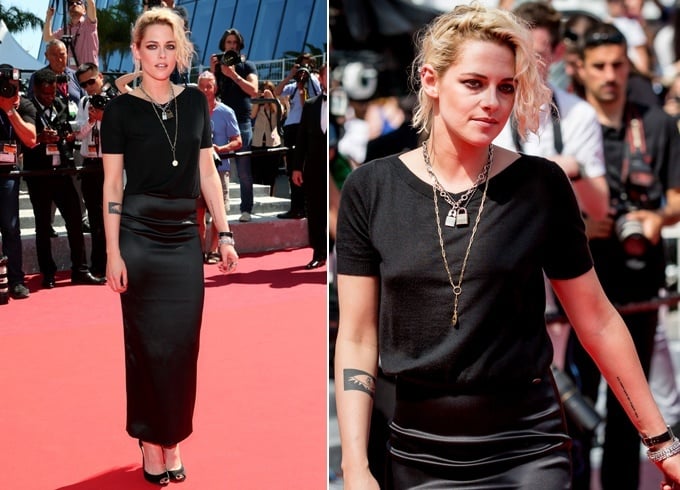 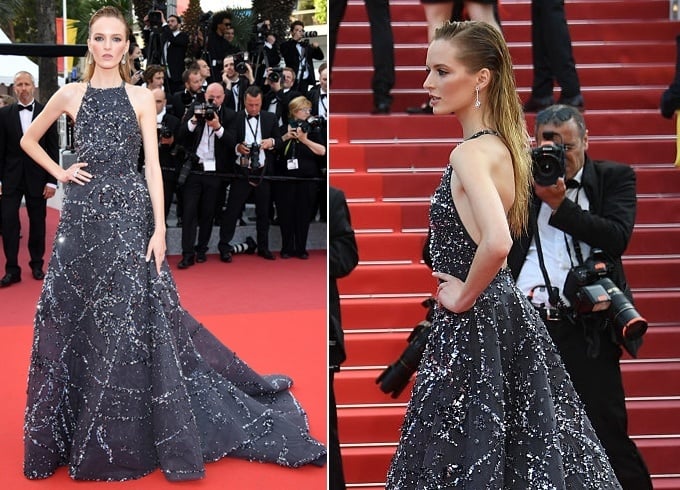 Bringing celebs from around the world on the same carpet, Cannes saw German model Toni Garrn dressed beautifully for the occasion in an Ulyana Sergeenko Couture. The strapless black gown, bereft of any extra embellishment, only with its sweetheart neckline and eternally high slit, successfully entrapped the onlookers into its black magic. The red lip and diamond necklace completed the look wonderfully. 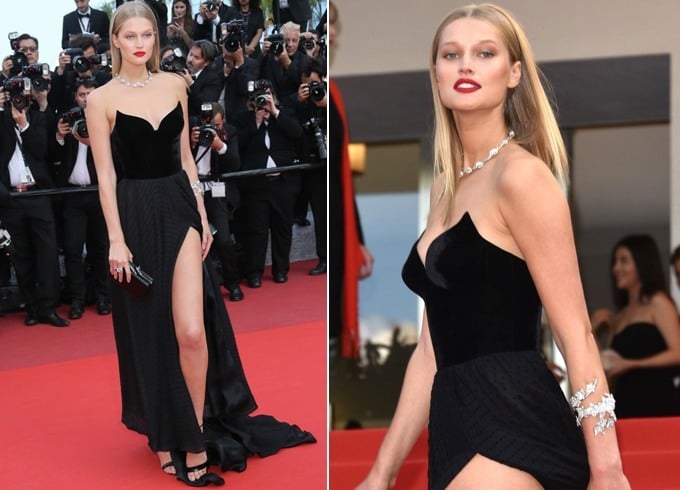 At the premiere of Loving, 46 year old film producer, Livia, was all poised and elegant in her strapless Stella McCartney gown in the shade of ivory. We are totallu in love with the diamond and sapphire necklace which matched the clutch she accompanied to the event. The next international name to make it to our list is Chinese model Xiao, who was pretty brave in her see-through lacy gown by Azzedine Alaia. Watch out, Kendall Jenner, someone is coming for you. Now, red on red is not the safest way to play, but the Moss sisters have surely aced their game. Emulating elder sister Kate, Charlotte, who is rather known as Lotte Moss in the modelling industry was spotted in a full sleeved in Christian Dior gown, posing masterfully at the shutterbugs. Her red nails, swept back hair, diamond necklace, all paired with one helluva attitude completed her look for the evening. 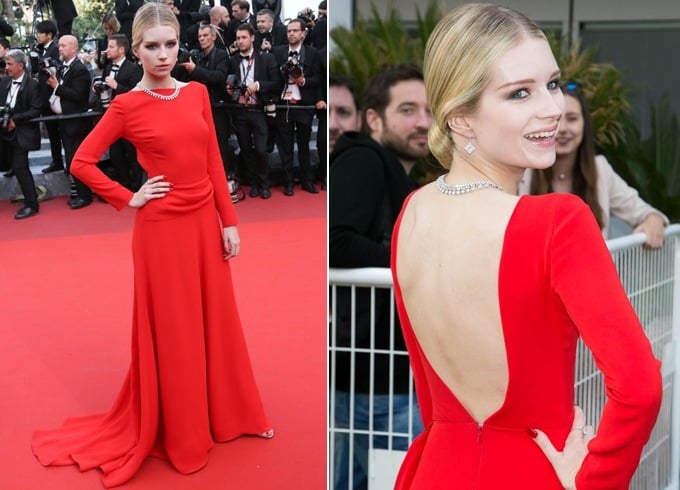 These were the 12 best dressed at the film festival’s 6th day. We are just left with 4 more days, but don’t we all know the last days are the best days of this fashion parade. We will be getting you all the news, stay tuned.

Get Inspiration From A-Listers To Style Your Denim Jackets

Buns Are The New BFF’s Of Bollywood A-Listers

Classy, Trendy, And Refreshing Is The Fashion Tour Of Sagarika Ghatge