Mehndi not only adore the bride’s beautiful hands, but also form a significant ritual of Indian marriages. Nonetheless the Indian bridal mehndi designs have also been widely followed by other parts of India for weddings and other occasions.

With the wedding season in full swing, it’s time to check out some stunning bridal mehndi designs. Whether you want traditional motifs, lace gloves or bangle style designs to adorn your hands-this is a good time to choose a pattern that has a beautiful significance to take you through your special day.

A full-hand mehndi design as this one is PERFECT for weddings. The extravagant motifs and intricate designs are symbolic of feminine beauty, purity, and wellness.

The striking details of this full-hand mehndi design present the balance between the traditional designs, enhanced by the nuances of the new. A gorgeous mehndi design like this portrays the twin motifs in all its elegance. This bridal mehndi will bring your traditional ensemble to life. 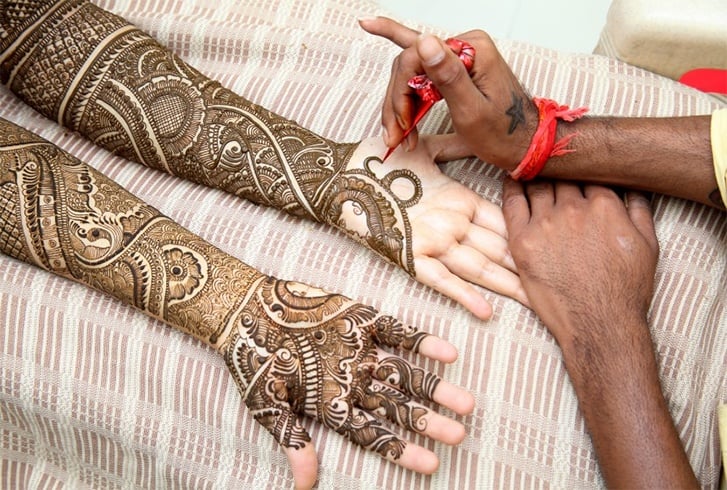 This design caters to the younger lot interested in experimental styles. The versatile appeal of this mehndi design can extend beyond weddings. You can also request the mehndi designer to create innovational designs using the traditional technique.

It can get monotonous for the bride to choose the common mehndi designs. A lace intricacy mixed with red floral mehndi designs can steer her narrative towards a culturally rich and contemporary approach. Modern day brides are steering towards traditional undertones whilst keeping it minimal for their pre-wedding functions. Treat yourself and your girlfriends to a myriad of mehndi designs. Try to shift focus towards colored details in red and green, as shown below. While the new-age bride loves the latest trends, it is important for her to select a mehndi design that is quintessentially classic to match the BIG occasion. So this mehndi design is perfect for someone who honors the age-old traditions but with a modern outlook.

This mehndi is hand designed with careful precision to suit the bride’s personality. This design captures the age-old charm of this bridal craft and is a treat for the eyes of every mehndi lover.

This mehndi design is a fitting pick for your engagement or reception. You can request for varied motifs including delicate floral details to Moroccan geometric figures and tribal motifs. The options are endless! Go on become an experimental bride! In the age of social media mania, even private and intimate moments like a marriage proposal get exposed on the internet. So the lady love has to go an extra style mile to make her special moment share-worthy! Pick a mehndi design that solely is rooted for you. And not to forget -to get a manicure done. You’d be shocked as to how many random people are suddenly going to get interested in your hands. 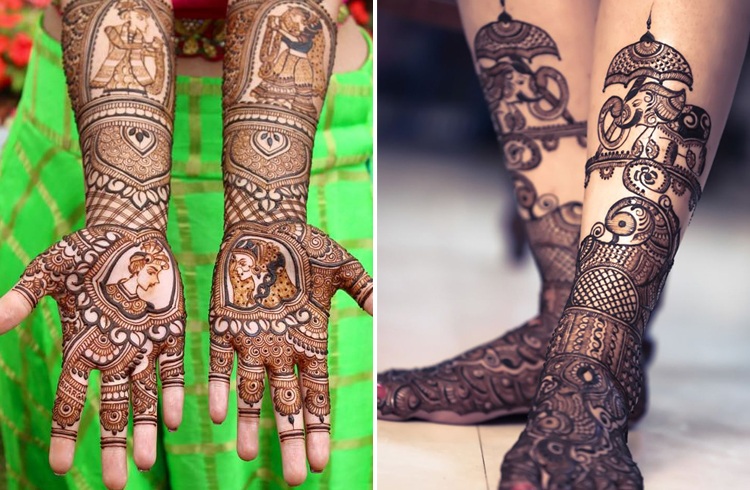 The significance of mehndi in Indian marriages

The Mehndi ki Raat is celebrated a day before the wedding. In the presence of family members, relatives and friends especially women, mehndi artist puts mehndi on bride’s hands, amidst songs and music. This henna putting ceremony entails an elaborate design (Rajasthani or Arabic), and it takes a couple of hours for applying over the hands and feet of the bride.

Apart from the bride, the bridesmaid and other females present there also apply henna on each other hands.

In case of bridegroom, a small amount of henna is put on his palm as a mark of good omen. Indians consider this ceremony to be very auspicious and in Hindu and Muslim customs, it is widely believed that the henna strengthens the bond between the wedded couple. It is also believed that the darker the color of the henna is, the deeper the husband’s love for his wife is.

Considered as a ‘shagun’, mehndi also strengthens bond between the two families.

Here are some factors related with this Indian bridal mehndi –

Some fun facts about bridal henna

The bridal mehndi design also includes the hidden inscription of the groom’s name on bride’s palm. It is believed that if the groom fails to find his name within the elaborate patterns then bride will be dominant in conjugal life. In some parts of India, the groom who fails is not allowed for the wedding night, until he has found his name in the design.

The evolution of Indian bridal mehndi

The traditional bridal henna has evolved over the years. In bygone era, the bride’s palms were only adorned with a huge circle made of henna, followed by filling of the finger tips. But with the influence of Rajasthani art and with the invading of Mughals in India, the Arabic designs eventually found their place in bridal henna designs.

Today, the designs have become more elaborate and decorative with creative patterns of floral and leaf motifs. In order to mark the occasion, the expert mehndi artist also creates the motifs of Indian weddings including shehnai, tabla, doli etc.

The henna is now also applied with glitters, sparkles, sequins and crystals to add more drama to the bride’s hands. The mehndi patterns are not less than any intricate art or painting, as artists make sure to fill up the motif-inspired patterns with intricate varied designs, which usually start with a peacock design.

The Indian bridal mehndi designs have found place in western fashion as well. Unlike our traditional fashion, the western fashionista are finding the henna tattoo as a fabulous way of creating style statement.