Young, vibrant and a tad sassy is Bollywood’s latest binge.

Just like a knight in the shining armour, our tinsel town divas seem to be glowing away to glory in this new shade of blue.

Cladded with an element of vivaciousness and liveliness of its own, more so in its sparkling forms, this blue hue is in perfect sync with the end of year festivities.

A refreshing break from the monotonous blacks and reds, we admit of being swayed by the flirty and chirpy tint.

It’s surely making its way up on our wishlist and we highly recommend you pick the color for your NYE this year.

If you are already thinking about it, then scroll down to see celebrity inspired ways to wear the color and put together a glamorous finale look.

If your soiree demands an ethnic appearance then you better make it chic just the way Anushka Sharma did, right ahead of her wedding reception in Delhi. The newly wedded couple made their way to invite the current most celebrated celebrity in India and across the globe, the Prime Minister of India, Shri Narendra Modi. Mrs.Kohli kept it rolling and us, drooling over her royal blue Palasi Varanasi brocade kurta she wore with a pair of Gorakh brocade pants and organza odhani. The outfit picked up by stylist Alia Al Rufai from the label Raw Mango, is a testimony to the royalness of the royal blue hue.

At the Longines launch in Bangalore most recently, Aishwarya Rai Bachchan made for a statement appearance wearing a striking royal blue dress, that gave us ballroom feels. The fitted black off shoulder bodice opened up beautifully into a blue skirt. Her red locks and a pair of black peeps rounded up her prettiness. The mastermind behind the look, stylist Tanya Ghavri deserves a special mention. 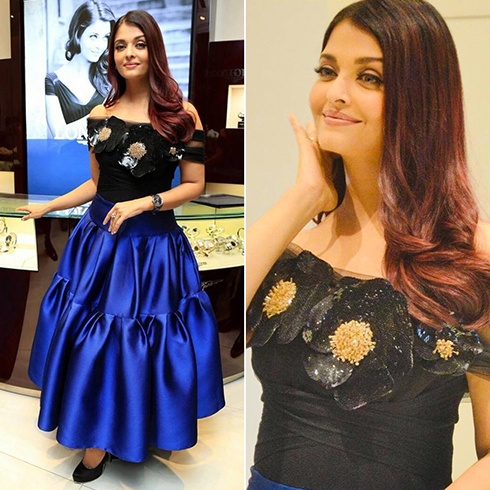 A bombshell appearance is what sums up Esha’s appearance at the Liva Protege 2017 night. Her Emporio Armani printed royal blue blouse looked aesthetic and ecstatic. Stylist Aastha Sharma styled up the blouse with a pair of black leather pants and a red corset belt. Jewellery pieces from H.Craft Fine Jewellery and black peeps from Intoto took Esha’s look to all new highs. With her makeup in place and tresses tied up in a ponytail, Esha sported a rock chic look. Katrina’s most recent striking and most charming appearance in blue cannot be missed in Jaipur for the IFFI this year, Kat made her way in an off-shoulder blouse and skirt from the house of Abu Jani and Sandeep Khosla. The off-shoulder blouse flaunting balloon sleeves and the bold motifs in gold on the blue escapade rendered all the beauty to this pretty face. With stylist Tanya Ghavri at the helm and earrings from Sunita Shekhawat, Katrina gave just the perfect inspiration for an absolute royal look in royal blue. 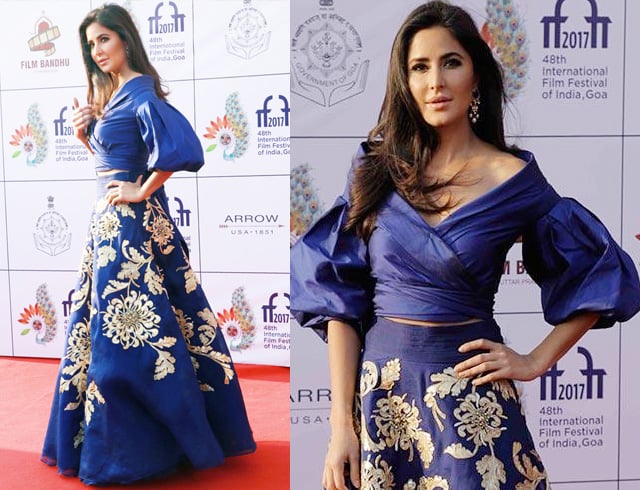 Spotted on the Dance Champions set was Katrina wearing Tarun Tahiliani. The printed number simply oozes cool vibes. The bodice sported a royal blue blouse fitted with a blue layering, that seemed to tug on to Katrina’s shoulders just right. The bodice made way for a fun bottom clad with polka dots subdued shades of pink and teal green. Stylist Tanya Ghavri added more charms to the look adding jewellery pieces from Aquamarine and Minerali. Every time we think she can’t out-do this one, she surprises us with her next look. If something is trending Sonam has to wear it, but what differentiates her from the rest is the way she wears it. Binging on the trending royal blue, Sonam took the plunge suited up cool in blue. Dressed up for a photoshoot for IWC Watches Arabia, stylist Rhea Kapoor had her muse dressed up in a bespoke blue suit from Mother Of Pearl. Right from the crew neck to frayed blazer to front slit pants, everything just spelled cool. Her pair of earrings and footwear can just not be missed. With a black Fendi bag and just the perfect eye makeup, Sonam did blue the best. 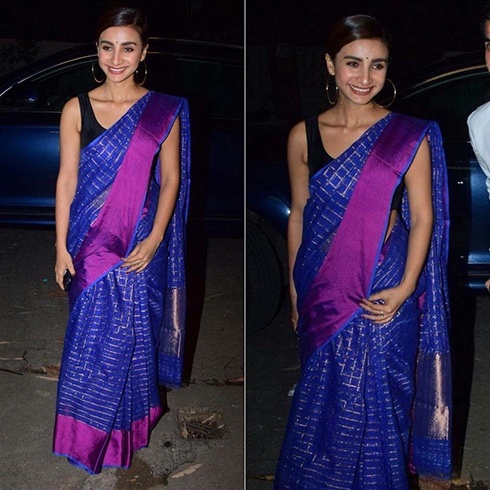 Alia knows her fashion game just right. The diva always surprises us with her take on the trending. Showing some royal blue love, Alia made a scintillating appearance at the Zee Cine Awards this year. Dressed in a red carpet ball gown from Atelier Zuhra the lady had the shutterbugs flashing continuously. The mirror work detailing looked premium and pretty. Stylist Ami Patel is the woman behind Alia’s red carpet appearance. 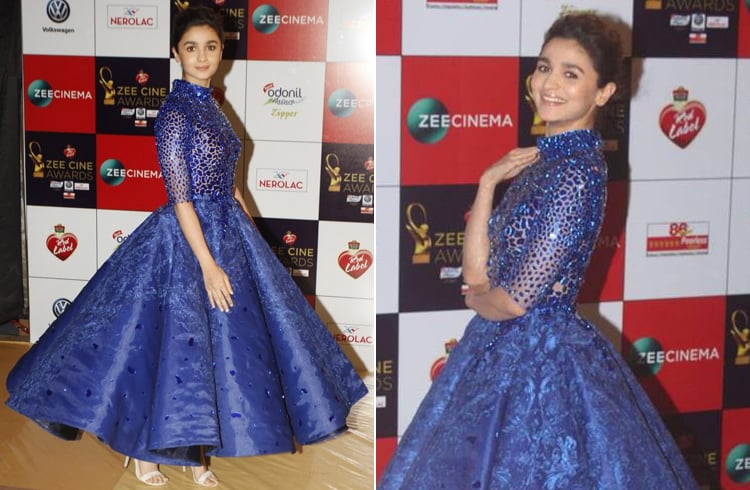 So lovelies, that did be your way up the ladder as far as year end fashion goes. We hope you will give a blockbuster blue finale to the year 2017.

Know All About Lip Reduction Without Surgery

What Do Sridevi, Karisma Kapoor And Divya Khosla Kumar Have In...

Top Fashion Picks for Women who love to ride their Bullet...

Fashionlady - July 15, 2014 0
The “Messi Vs Germany Team” was definitely a match worth watching. Germany definitely knew how to keep Messi under control and tried their best...