Let’s first glance through some interesting personal facts about this Hollywood celebrity.

Let’s glimpse through some of Jennifer’s personal tastes:

As a child, Jennifer aspired to be a doctor. However, destiny had something else planned for her. As a small girl, she used to suffer from hyperactivity and social anxiety and thus could not fit comfortably with her peers. However, all this vanished when she took to stage in numerous plays in her school as well as church. Her first informal role came at the age of nine when she played the role of a prostitute from the town of Niveneh during a summer camp in a religious play based on the Book of Jonah. Born with a natural talent, the actress had never had any kind of formal training.

Remuneration: As per the 2016 reports, Jennifer’s remuneration in 2016 was approximately $46 million.

Net worth: Jennifer Lawrence net worth as of 2017 is a whooping $75 million.

Unlike other actresses, Jennifer is strongly opposed to dieting, no matter what the film role is. However, she is all for body weight exercise. Considered a ‘fat actress’, she does not mind shedding weight for a movie but refuses to go hungry. Her killer body is an inspiration to many as it is not obtained by deprivation. 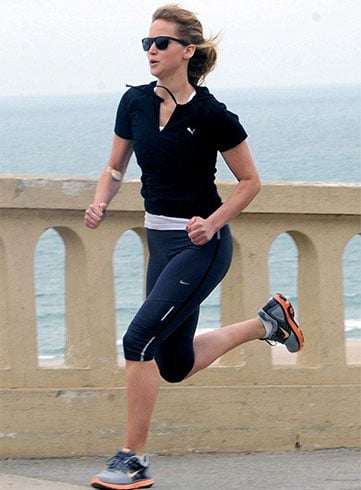 Normally Jennifer likes to exercise in short parts throughout the day with 15 to 30 minutes of intense exercise per day. However, she followed a special regimen for her role in ‘The Hunger Games’ under Dr. Joe Horrigan. He stated that Jennifer never missed, was never late and never complained. Her fitness regimen essentially consists of five parts and was spanned over six weeks. The entire program was focused on agility and speed training. Warm sessions went without saying.

The purpose behind the cardio session was to increase blood circulation as well as build stamina, endurance and overall health. Post five to ten minutes of warm up, she would get into 20 minutes of high intensity cardio where she indulged in exercises like running, cycling on road, mountain, classes or sometimes the stationary bike. Aerobic sessions like dance classes and hiking were used as variation but Jennifer indulged most in skipping.

For muscle buildup to burn more calories, she did a 20-minute high intensity routine which consisted of bodyweight squats, sit-ups, pushups and jumping rope in a circuit. Here she would do one exercise for 30 seconds and then move on to another without break.

To be able to do stunts like a pro by increasing both her flexibility and concentration, Jennifer took to yoga. It was also helpful in stretching and relaxing her body between high-intensity workouts. These were normally low intensity and mostly comprised of sun salutations, chair poses, tree poses, planks and reverse warriors. She would do the even on her off days.

True to her skin and attitude, Jennifer never went hungry and lost her weight by eating balanced diet in proper quantities.

The highlights of her dieting plan ares:

Jennifer chose to eat food of her preferences but optimized and monitored her calorie intake. She faced a little issue as prior to it; she was on a high protein diet. However, she limited her calorie intake through portion control. The key here was in intake of carbohydrates in contrast to fats.

Some Interesting Facts About Jennifer Lawrence

Watch The Celebs Getting Their Sexy Best To 2016’s Teen Choice...

10 Unique And Weird Beauty Hacks That Makes Dolling Up Easy

Pack The Bags This Vacation In Style – Travel Style Of...

Superstar Clothing Collaborations: Do You Want To Be Like Queen Bey?