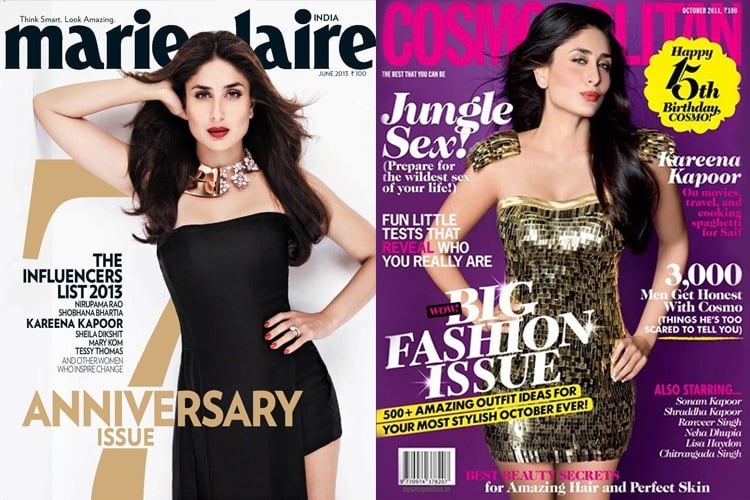 Geet or Poo? What do you prefer calling the gorgeous Kapoor khandaan lass who is married to the Nawab of Pataudi.

TAKE A LOOK AT KAREENA KAPOOR ON MAGAZINE COVER PAGES

Just as her films that have been box office hits ever since she did Refugee, Kareena Kapoor magazine cover looks has also been a rage among Bollywood lovers. Let us check out some.

Ravishingly hot and glamorously best, Kareena Kapoor magazine cover for Femina, March 2016 shows you this femme fatale in a sequined and shimmering gown designed by Monisha Jaising. What made her look even bolder is her dark bold lips! The cascading waves in her hair, further gives a classy look to this Ki & Ka heroine.

An absolute stunner, Bebo rocks in Kareena Kapoor magazine photoshoot done recently for Elle, Feb 2016 where she looks sassy in a printed shirt and pair of long earrings. What adds to her natural beauty is her messy hair, and nude make up. Doesn’t Kareena look an intensely lovely looking lady in this magazine cover page?

Kareena Kapoor magazine cover Photoshoot as well as for the inside pages shows Bebo daydreaming in Indian and International clothing. The shoot was done in Barcelona, and Kareena looked an elegant Indian princess, wrapped in a long floral embroidered ensemble designed by Rahul Mishra. Ah yes, she looked ravishing in heavy statement earrings and maang tika. Her lovely tresses were kept back slid and her make-up was natural and minimalistic. Bebo is indeed giving major fashion goals to all wannabee brides.

No way can you miss out Kareena Kapoor on the magazine cover page of Maxim India, Sept 2012 issue which showed her in a black and white shimmering top and a tight black skirt. I tell you, this cover was pretty seductive enough to reveal a bit of her assets!

Why we Love Kareena? The answer is simple. She is making summers look haute (and not hot) dressed in white lace blouse and skirt by Dolce & Gabbana, where she gives an uber cool attitude.

Featuring on the cover of Vogue India in March 2008 is Kareena Kareena (remember the popular Zee TV comedy by this name). Shot by Suresh Natarajan, she comes across gorgeously as the girl of summer in this cover.

Tell us which Kareena Kapoor magazine photoshoot stunned you by dozens. We are waiting for your replies on our FB and Twitter engines.

How To Wear Peplum Dress In Style – Inspiration From Bollywood

Crown Tattoos: A Royal Form Of Body Art You Could Try

Tadasana: Know How To Do It And Learn About Its Health...