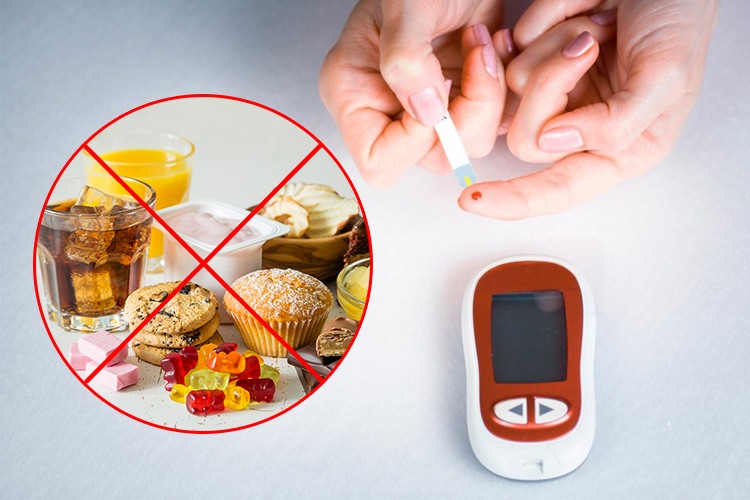 “Mujhe Sugar ki bimari hain”. Common lingo we hear these days which has been doing the rounds ever since man developed a sweet tooth or gave in to guilty pleasures. Genetic influence also has a role to play in developing ‘Sugar ki Bimari’ (called Diabetes in English).

One needs to monitor blood sugar daily, eat a healthy diet, exercise regularly and watch out if there are no other complications of heart and other organs of the body, if they are diabetic. Weight management is also a must, and so also is the diet intake.

Do you know what are the foods to avoid for diabetes?

Here’s the diabetic diet food list or food for diabetics.

There are some foods that are best left on the table or in the grocery/departmental store rather than consuming.

Feeling starved, you walk into a restaurant. A quick scan of the menu and you find Nachos simply irresistible. So you order it as an appetiser and a separate meal. But most nacho orders in restaurants go up more than the required meal’s worth in terms of calories, carbs and fat. Emphasise on reduced-fat cheeses and baked tortilla chips. This will make your Nachos a meal, not an appetiser.

Just a simple cup of coffee with little milk can be a good low-calorie beverage for the diabetics. Make a switch-over to TEA instead. It equally satisfies you and is a cheaper beverage alternative which keeps your eating plan healthy and on track.

This eatable is known as the ‘Bad boy’ on the breakfast table – because it is high in calories, saturated fat, and sodium. A classic example is McDonald’s Biscuit and Gravy entree which has 570 calories and 13 grams of saturated fat. My God!

Eating fish might sound like a safe choice when it comes to fighting diabetes and weight. But watch out for the fish preparation and the sides. I mean, if you are going for a breaded-fish meal, with sides such as fries, coleslaw and hush puppies, then stay away from it. A typical platter with 2 fish fillets (that too deep-fried), hush puppies, fries, and coleslaw equals a total of more than 1,300 calories, 84 gms fat, 113 gms carbohydrate, and a hugely 3,000 milligrams of sodium. This is many times more the suggested carb and sodium level for diabetics.

High in calories and sugar, FJB very much features in the foods to avoid for diabetics list. This is why, reading packaging labels is a total must before making a purchase. It is important to be informed of the nutrition information per serving. Many beverages in cans or bottles contain more than one serving.

One of the most tempting treats that an airport or a mall greets you with is your favourite freshly baked cinnamon rolls. My dear, it is NOT the recommended food for diabetics. Are you going to put your health at risk by going for 800 calories and 120 grams of carb in cinnamon rolls?

FAST FOOD lovers, you are not going to like to what I say. French fries are loaded with calories, saturated fat, and sodium. Even if you are digging into ‘trans-fat-free’ fries available at some restaurants, you think it’s a jolly good food for diabetics? Huh! No way! Go for oven-baked recipes, instead. They can be given the green signal for food for diabetics. So you like to take a bite of those cookies sprinkled with chocolate? They are hiding the trans-fats. Not challenging your imagination but those sumptuous cookies are extremely high on butter, high-fructose corn syrup, shortening, margarine, partially hydrogenated or hydrogenated oils and biggest saturated fat and trans fat. What will it do? Pile calories and carbs on you. This is why, purchased cookies can’t make it to diabetic diet food list. Any solution there is? Yup, bake cookies at home instead: it is safer and free from diabetes. What say?

Sounds irresistible (to the NON-VEG lovers)! But, please avoid it. Why? It gets you significant amount of carbs, calories, sodium, and fat. To give you an example, there is a wide difference between KFC Extra- Crispy Fried Chicken (490 calories) and KFC Grilled Chicken (220 calories). It is rather better off cooking fried-style chicken at home.

Fruit Smoothies bought in ice-cream parlours might sound a healthier option but it is not. It has added sugar in extra-large portions. Making smoothies at home is the best choice rather.

Sandwich for lunch at one of those happening places? It’s a big NO-NO because processed lunch meat is full of sodium. Want a confirmation? The nutrition labels or an attendant will tell you the nutrition info of meat that has been freshly-sliced. Always go in for meats lower in sodium. The low-sodium meats have a place in the diabetic diet food list.

So, how was it reading this comprehensive list of foods to avoid with diabetes? Hope you got a fair idea of the “Don’ts in Food Items” you need to follow.

Do write in and share more inputs you have on food for diabetics.

10 Fashion Staples for Women in 30s

The “It” Layering That B-Town Beauties Are Sporting This Winter

Fashionlady - June 18, 2021 0
Yoga has been a part of Indian life since the beginning of time. But, like every other thing, we started valuing it more, only...