Moms-To-Be: Here Are Some Safe Exercises During Pregnancy That You Can Do 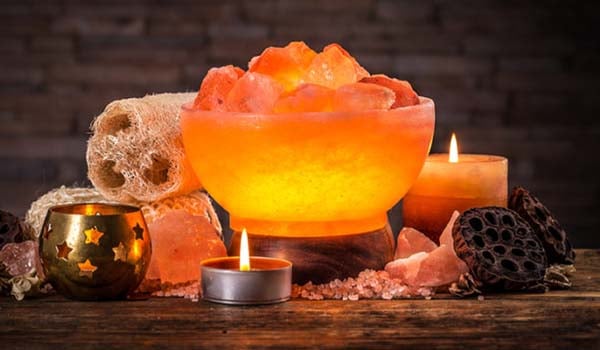 The word ‘Himalaya’ itself takes you to the mountains straight off, doesn’t it? Have you ever owned a Himalayan salt lamp? If you have, then you will agree that it is like having an open window with Himalayas-like fresh clean air kept in your room. But did you know that it is a passport to healthy and purified living? 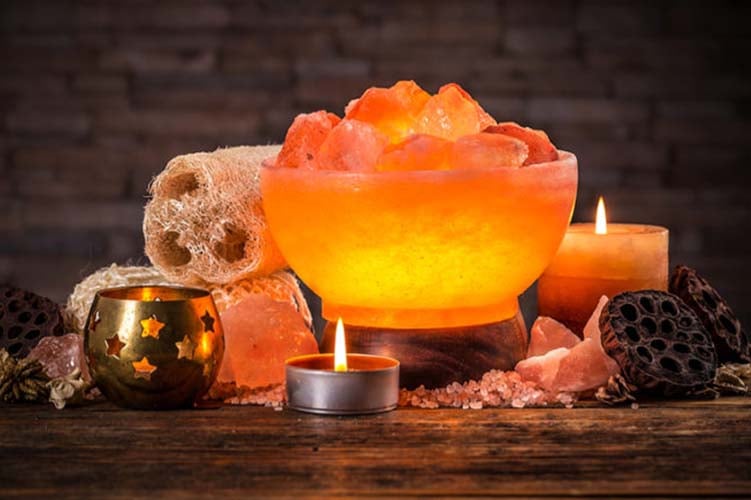 Have you ever seen pretty and glowing pink ‘salt’ lamps? They are the ones that do the following:

It’s like saying that salt lamps do a million good things, without spending a million rupees!

Like to get into the chemistry part of it? Salt lamps are light bulbs of different wattage which are placed within blocks of rock salt which come in different sizes.

In the field of alternative medicine, salt lamps are marketed as “natural ionizers”.

But what does an ionizer do? It produces ions (atoms or molecules) with a net positive or negative charge which is caused by an ‘uneven’ number of protons and electrons.

In a nutshell, they emit out negatively charged ions, and in the process, deliver countless health benefits including improved sleep, reduced anxiety, and protection from an “electric smog.”

Too much of intro? Okay, lets get straight into the working methodology of HSL.

Here are the benefits of Himalayan salt lamp for you:

HSL purifies air through “hygroscopy”. It means that it attracts water molecules from the environment first and then absorbs them into the salt crystal.

The core benefit of HSL is they hold incredible ‘clout’ to say goodbye to dust particles, pollen, cigarette smoke and other air contaminants. How they do it? By removing them from the air. This means, salt lamps naturally purify air.

Salt lamps give out a warm orange glow (quite similar to the candlelight hues or those found in a campfire) – which explains the low light! This makes it a great source of light for the evening. It can also be used as a “night light” without affecting your sleep.

Now that HSL lamps are “soothing” lamps, they help in boosting mood and energy levels, esp. for those who are troubled with Seasonal Affective Disorder (SAD).

When it comes to tackling asthma, bronchitis and other lung-related problems, HPS inhalers come of help.

We breathe to live and vice versa, don’t you think? Looking at the smog levels in the air, one could die any moment. An HSL lamp filters the air you breathe. This helps in keeping your lungs clean.

It is one of the boldest claims – that because positive ions sap you out of energy, Himalayan pink salt lamps leave you more energetic than ever.

What is EM, you ask? It is electro-magnetic radiation. Does EM exist in our normal lives? Yes, it is emitted by our electronic items (such as smart phone, computer, television, tablet, appliances, etc). Constant exposure to EM can cause a ‘down’ in body’s immunity levels. HSL reduces the radiation level from EM, bringing relief.

It is for a fact, confirmed by studies, that negative ions are of immense benefit to those suffering from seasonal depression. They may help other forms of depression too.

Apart from emitting negative ions (which are responsible in improving mood and energy levels), a Himalayan pink salt lamp gives the warm sunshine glow which can be used to relieve the symptoms of Seasonal Affective Disorder (SAD).

Did you know the feeling of ‘Static’ causes stress, embarrassment, frustration and a bad hair day? Where do Himalayan pink salt lamps come in handy? It neutralizes the ionized particles in air which cause static electricity.

So what’s coloured salt got to do with fighting air pollutants?

Well, salt lamps are not a great source of negative ions. But since they have hygroscopic properties, they could improve the quality of air in many ways.

They not only offer a soothing glow, they also attract air pollutants and neutralize the effects of electronics.

However, there isn’t any scientific evidence to support the fact that Himalayan salt lamps release negative ions (or clean the air). Reality is that the lamps are relaxing to look at and are much like a ‘lit’ candle.

How Do Himalayan Salt Lamps Work?

You have read about the benefits of Himalayan salt lamp above. Lets learn more about them:

Himalayan pink salt lamp absorbs particles and water from the air. In the process, it also takes positive ions with them. When the heated salt releases cleansed water vapor back into the air, it also expels negative ions – these ions helps clear our lungs.

Did you know in the 19th century, Polish salt miners (working in the same mines which now produce Himalayan salt) had less pulmonary health problems than the general population?

Let us now explore the workings of Himalayan salt Lamp. 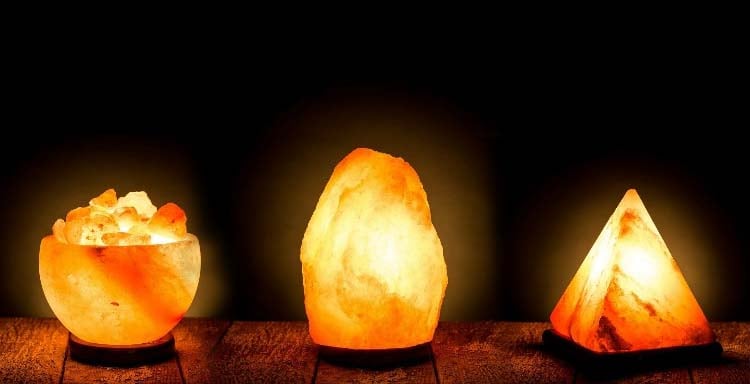 Which place to put it in? Living room or Bedroom? Can be both!

Where To Place Salt Lamp In The House?

Before talking of salt lamp, what does salt have to do with space?

Salt is an ancient remedy. It ‘frees up’ stuck energy. Remember, our parents/ grandparents cleansing the house by sprinkling salt water in the rooms’ corners (to shoo off bad energy). Once that is done, lovely objects are put in the corners of the house in the form of stones, vases, plants etc.

Now where to place them?

Somewhere, where you and your family spend most of the time, or where there are plenty of electronic appliances.

Start off by putting one Himalayan salt lamp. Then, add more, one to each room. Do not bombard your living space with excess of HSL.

But yes: Think of the following factors while putting HSL in your interiors:

Wouldn’t it be nice to know about the brands/models of HSL? Your wishes answered! 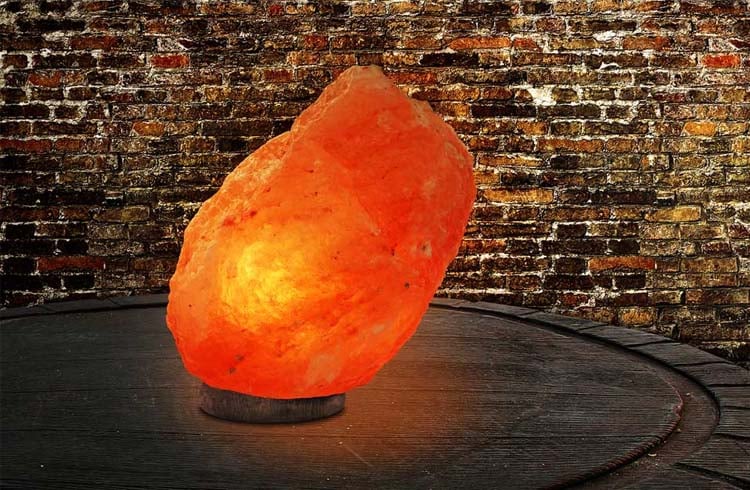 This hand-crafted 8 to 9-inch model from WBM is the topper! Pakistan-made, the lamp has been handcrafted using natural crystals. Has a calm amber glow. 25-watt bulb which can be dimmed. Has wooden Neem base which is durable.

This one is a 6 to 7 pound handcrafted Himalayan rock salt lamp, with efficient 15-watt bulb. Design is CE and RoHS approved. Affordable, and yes dependable. Gives soothing amber glow. On the health part, it fights bacteria, fatigue, insomnia and common cold.

4. Crystal Décor Lamp in a Star:

Meet the reliable HSL with a metallic basket which is ‘star-themed’. Blends well in homes. Has dimmable 15-watt bulb. Plus, all-natural Himalayan salt crystals. Gives relaxation and soothing effects.

An ancient remedy, salts are known for freeing up stuck energy. Coming straight from the mighty Himalayas, the Himalayan Salt Lamps do a million good things without having to spend a million bucks. These salt lamps absorb particles and water from the air thereby purifying the air naturally. The heated salt also releases negative ions in the atmosphere which help in treating a host of respiratory related ailments. From your living area to your bedrooms, a Himalayan Salt Lamp will add a bit of beauty and brightness to your space along with rendering it’s many incredible health and cleansing benefits.

All About Saffron During Pregnancy
Waking Up With Headache? Here Are The Home Remedies To Get Relief
Benefits Of Sleeping On The Floor
Lipton Green Tea For Weight Loss