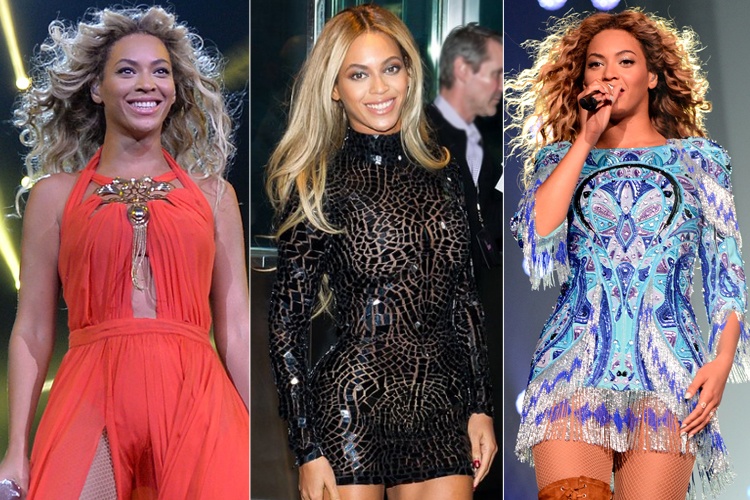 The world came to a standstill when Queen Bey dropped her Lemonade album. Nah! She didn’t need any marketing, she didn’t need Instagram drum rolling, she didn’t post rushes for days, no videos on YouTube either. Beyoncé doesn’t need any of it, she is a queen and is beyond the do’s and don’ts of social media. The tiniest tweet ever and Lemonade was a talk more famous than the politics of the United States of America. This was however not the first time the singer had taken over media and internet with the littlest of effort. Just like music, style and fashion comes naturally and effortlessly to the queen.

Being in the industry from the very early years of her life did benefit her immensely, the immaculate sense of dressing, we guess, is one of these boons. When she had just embarked upon this journey of music with means too limited to afford the best designers in the game, it was her mother who sewed her costumes, at times with little inputs from the emerging star herself. But it wasn’t too long before the main attraction of Destiny’s Child rose to stardom and designers from Italy and France flocked the gates of her abode.

Here we are with the best of Beyoncé’s looks in the past few years.

The Look of VMAs Performance, 2011

After the Grammys this year we all have come to one conclusion – if anyone knows how to flaunt pregnancy it is Beyoncé. Now let’s come back to the Grammys in a bit, and take a trip down memory lane; we are talking the 2011 VMAs, when Jay Z’s better half was pregnant with Baby Blue Ivy. That was a moment to go down in history when she unbuttoned the purple tuxedo blazer by Dolce & Gabbana and revealed her baby bump through the glistening sequins in style. Following the exposure, she broke out proudly singing, “Love on Top.” Indeed! Givenchy, over the years, has become the singer’s go-to designer. She seems to trust his creations with eyes closed and we don’t really blame her. The French designer has always been successful in bringing out the best in all the celebs he dresses, Beyoncé being no different. AT the Met Gala Event of 2012, the queen of pop music was seen in an extravagant gown which was exquisite in its sheerness. The long trail in black and purple was embellished with feathers and turned all heads at her. The sheer bodice was complete with intricate bead work. We loved the sleek hair and the flash of genuine smile over the shoulder. 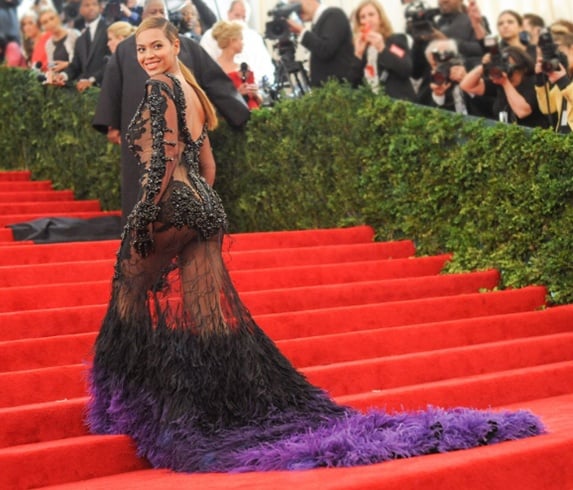 It was only obvious for us to expect something beyond spectacular when Beyoncé was announced to be the performer at the 2013 Super Bowl. In a black lacy bodysuit, the singer was a true demonstration of the female beauty and power. She had literary shut the show down with her half time show in New Orleans. The Ruby Singer bodysuit in black leather with lace outer lay left the audience gasping for air. The matching slouchy gloves aided Beyoncé in hijacking the show. Completing the outfit with Proenza Schouler booties and knee high socks worked fabulously. 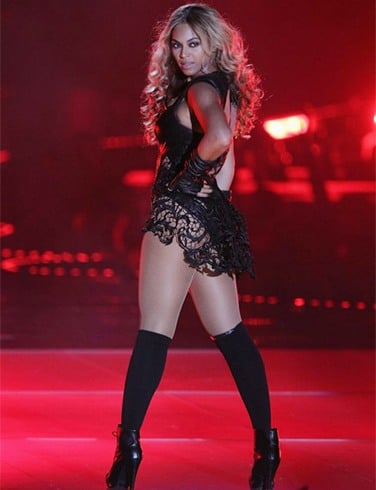 The Coachella Dress in 2015

The music festival gives an opportunity to all our celebs to dress down and bring forth their laid back selves. But it’s different with Beyoncé. Or perhaps it’s just the fact that the gorgeous mother can just never look bad. She hit the grand celebration of music in an ensemble very appropriate for the occasion. The bohemian dress with floral contrast of the dry desert was rounded up with studded accessories of leather boots and an edgy studded pouch. 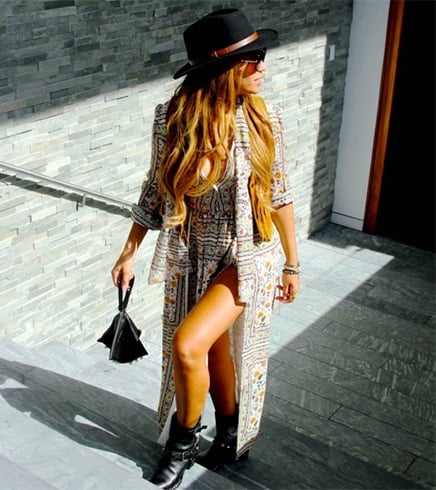 She has not only perfected the art of looking elegant, she can also totally bring out the edgy. She rocks a party like no nobody’s business, if need be. Beyonce’s outfits have always been apt for the occasion. The 2013 Tom Ford party saw the rock star version of our queen. Dressed in a sparkling mosaic mini dress by the designer, she kicked in the inner biker babe with matching thigh high peep-toe boots. 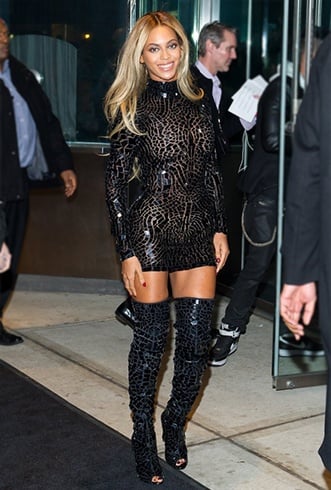 Met Gala doesn’t lose out on the opportunities of being graced by one better than the other looks of Mrs. Carter. We weren’t even over with her show of 2012 and in 2014 she allured us once again arriving at the event in a splendid black beaded gown by, you guessed it right, Givenchy. The dress was magical– the front showcased a high slit, a resonating plunging neckline, the sheer fabric, and the best of the package was the birdcage veil she accessorized herself with along with a pair of chunky earrings. Her look was a perfect blend of romance and gothic – perfect drama. When we say ‘in white’ people automatically think of bridal gowns. Umm no, Beyoncé’s red carpet arrival gave a new definition to the ‘White Gown’ in 2014, as she rolled up on the red carpet in a Michael Costello creation. It was a lacy number, almost as a naked dress, but not just any naked dress. This gown became the pioneer for many of such gowns to be seen in future. The curve hugging portrayal was complete with stunning jewelry pieces by Lorraine Schwartz, but who has eyes for the jewels? Because all eyes were glued to Bey’s sexy back. 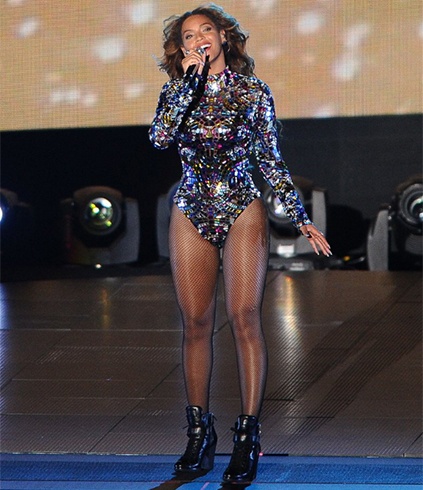 We have finally made it to that part of our list that holds history. When Lemonade was released all out of nowhere, Bey was sent to a sudden state of frenzy. If the hypnotic music wasn’t enough, check her epic gown of all times, which took Beyoncé’s fashion sense to new heights. The fully blown, multi-tiered Roberto Cavalli was a stunner beyond doubt – can we all agree? To add to that were the mad blond curls, the ‘hold up’ singer bounced left and right through the entire song. 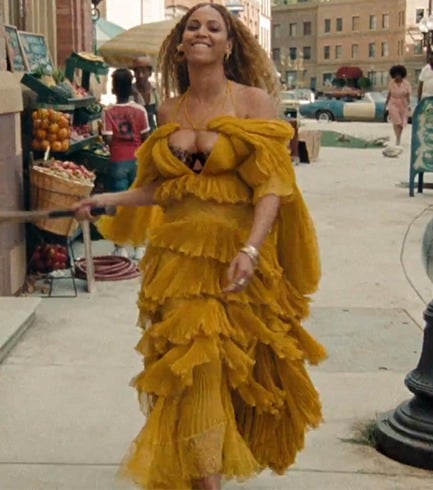 Another year that saw Beyoncé hijacking the award show and another view of the famous baby bump – what’s better this time? The twins. Post the Instagram debut, Queen Bey put her twin bump to public view, looking every bit like an Egyptian goddess in her golden ensemble that she dressed in to perform at the Grammys. The metallic piece was complemented with yellow silk fabric that gave an impression of molten gold all over the mom-to-be. Beyoncé’s make-up, from the never-ending blond locks to the manicure beyond perfection, gave the singer a look that the most magical dreams are made up of. Be it Beyoncé’s looks, Beyoncé’s dress or Beyoncé’s hair, the onlookers have been left enchanted and bewitched by the inescapable appeal of it. What were the chances of us eluding this magic? None!

Bindi Designs According To Face Shapes

14 Home Remedies To Get Rid Of Summer Cold

15 Pieces From Celebrity Closets That You Can Actually Afford

Fashionlady - March 18, 2018 0
Every celeb has a closet that is to die for, and why not – they have a handful of people doing their wardrobes and...