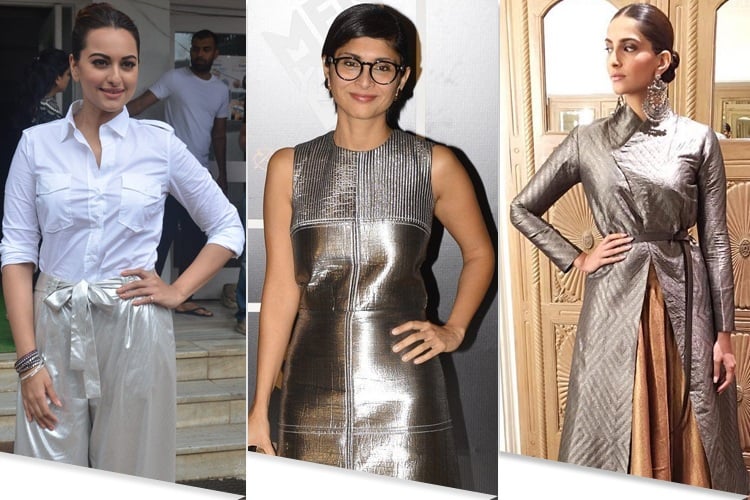 And if you are looking for some external help to amp up your shine, then dressing up in the gleam and glitz of metallic fabrics is the way to go.

The currently trending metallic inspired fashion has won the hearts of industry insiders with its glossy luster.

Though the trend made its big comeback in 2014, I guess we were not done with exploring this futuristic experience. And hence right from the beginning of this year almost all the international and national designers have been working on their interpretation of this flashy element. Be it a grunge look or a more sophisticated version we are definitely high on metallics.

With all the celebrities and fashionistas gradually making room for this shiny addition in their wardrobes, we can vouch for the fact that this one’s here to stay.

This year with the inclusion of metallics in almost every prominent collection at the LFW, and our fashion chiefs and pace setters embracing it with much elan, we can only interpret its rise in days to come.

As a quick guide, for you to work and binge on this glamorous movement, we got you a list of toppers from the tinsel town.

Stylist Ami Patel gave us an all new inspiration by combining military with metallic, whilst dolling up her muse Alia Bhatt for the Global Citizen Festival in Mumbai. The shimmering golden pleated midi skirt was well worn with a military short cape jacket, both from the house of Lulu and Sky. 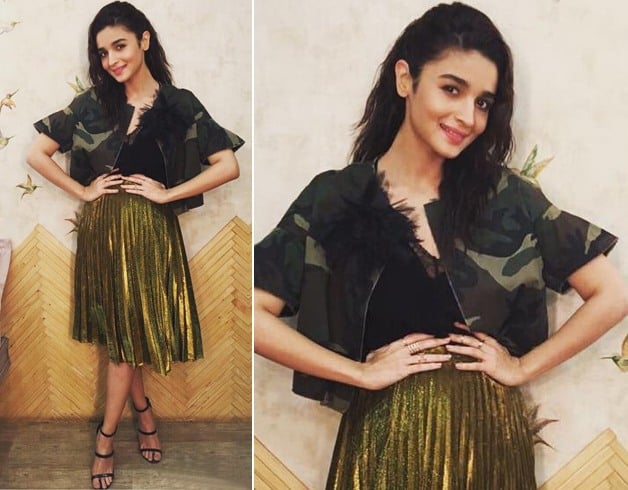 Sonam Kapoor defines avant-garde fashion in India. With a metallic fever on a high the lady gave us quite a few looks donning it’s luster, out of which these three were the top scorers.

The unconventional dresser spurred quite a sensation at the Cannes Festival this year with her electric blue metallic sculpted drape from the house of Rimzim Dadu. Credits to stylist and sister Rhea Kapoor for styling up this look with subtle statement pieces from Suhani Pittie. 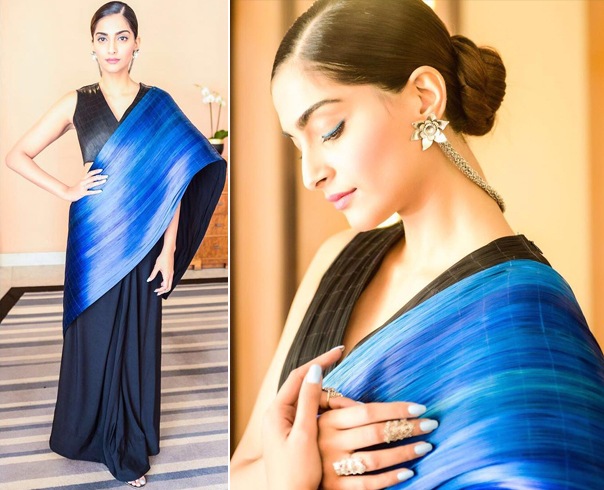 For the Umang Police Show this year, Sonam Kapoor presented us with a more subtle shine of the metallic hues in a jacket and skirt set from Payal Khandwala. We have to admit this silver meets copper combination was quite a bombshell. Sonam completed her look with statement earrings from Apala. 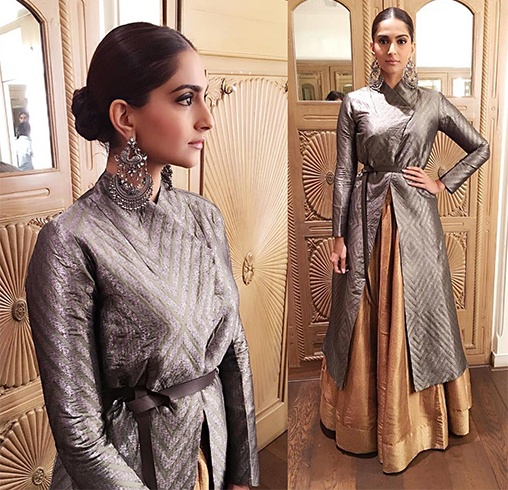 Topping on our list of best-dressed jet setters would be Sonam Kapoor with her offbeat airport style file. The lady gave us quite a fashionable treat in a wrapped coat beaming with that metallic shine.

The leggy lass binged on this trend rocking a metallic trail in Bibhu Mohapatra for the Forever Mark fashion show. An entirely new perspective on working metallics if you are not bold enough to take a complete plunge.

We felt those shivers run down our spine when we spotted Esha Gupta dressed in an electric blue metallic number for a wedding function. Now that’s what we call bold and beautiful. At the big fat birthday celebration of designer Manish Malhotra, Disha Patani coordinated her rumored boyfriend’s golden jacket with her golden pleated long skirt. The lady paired the shine with a strappy black bustier giving us all the motivation to work metallics on the dance floor.

Pernia went all guns out at the Vogue India Fashion Fund finale event beaming in the shine of her metallic silver dress from Kanika Goyal. The peek a boo neckline with the pleated edges stirred up quite a hysteria in that metallic fabric. 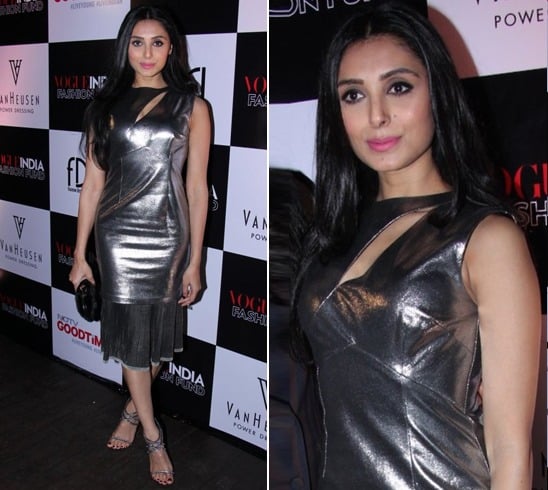 Whoever said metallics was for punks has not seen this desi sophisticated avatar of Neha Dhupia. The lady rocked a woven sari combining linen and metal accents from the house of Anavila Misra for the promotions of her movie Moh Maaya Money. Credits to Sohaya Misra for amping up her element with vintage jewellery pieces from Curio Cottage for that added retro charm. 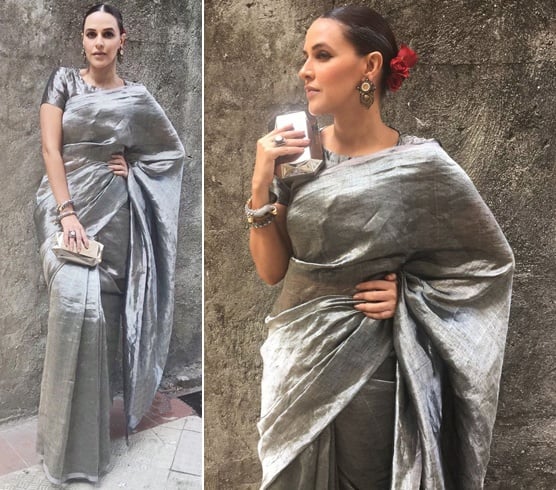 This fashionista has literally taken over the fashion media space with her back to back, super se bhi upar looks, for co-judging the dance reality show Super Dancer. For one of the episodes, the lady dipped herself in golden hues, donning a pant suit from the house of Nikhil Thampi. We heart her metallic interpretation, which was all gold and glamorous. 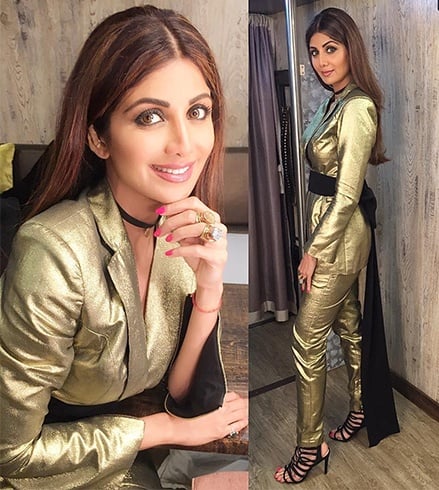 At the Filmfare Glamour and Style Awards red carpet, Pooja Hegde put her best glamorous foot forward in a sculpted metallic number from sculptor and designer Gaurav Gupta. Looking absolutely stunning, the credits of this look go to the design maestro Gaurav and stylist Aastha Sharma. 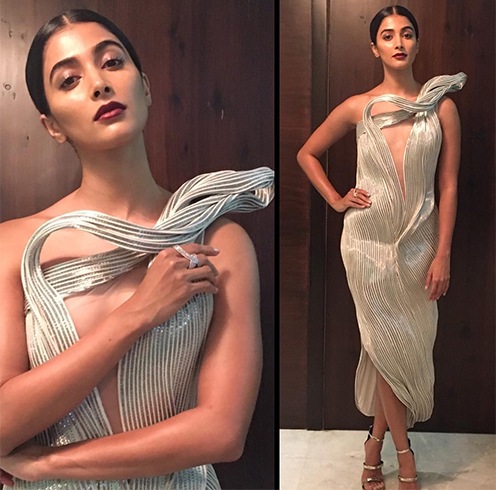 Pooja gave us yet another striking metallic appearance while posing for the Filmfare photoshoot. Heart the crumpled gold foil look on the metallic pants by Sanchita. 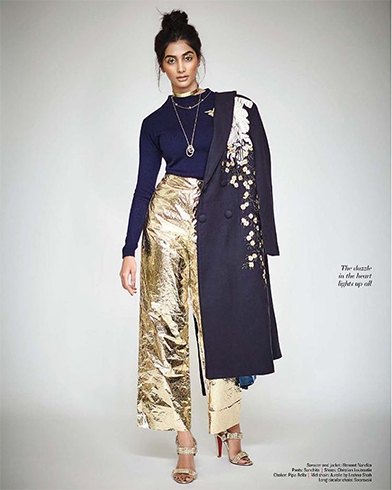 Producer and star wife, Kiran Rao, gave us a subtle and classy metallic look, cutting a pretty picture at the GQ Awards night this year. The short dress from Dhruv Kapoor was one of the most wearable metallic looks of the season. Styling credits to Nidhi Jacob. 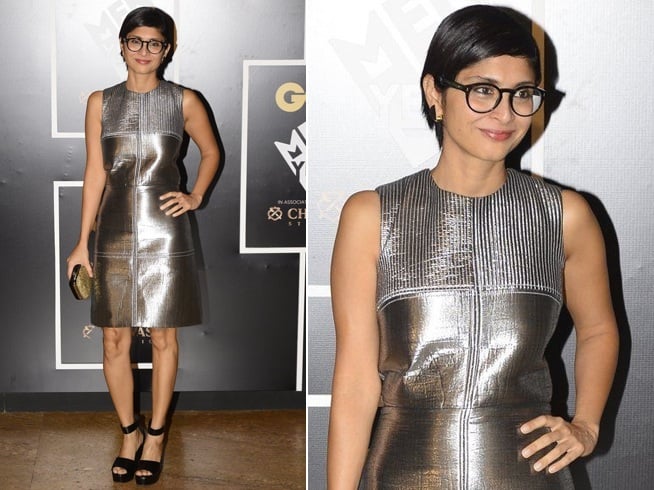 Sarah Jane Dias dazzled the GQ Men’s Award red carpet in a sultry and seductive metallic number from Deme by Gabriella. The plunging neckline with that high slit oozed sensuousness. Sonakshi Sinha whipped up some metallic magic while promoting Akira, donning a pair of silver Zara culottes with a crisp white shirt. Now that’s some inspiration for wearing the hue during the day. Huma gave us a casual yet stylish winter appearance combing her star print sweater with a golden pleated metallic skirt. This Madison On Peddar look was picked out by stylist Sanjana Batra. So lovelies, get set to blow the dance floor this party season with your moves and that metallic magic. Ring in the festivities with all your sheen.

We Are Totally Crushing On The Half Moon Handbags For 2018

Five Amazing and the Best Anti-Aging Creams 2016 Has For Us!

What to Wear to an Office Christmas Party