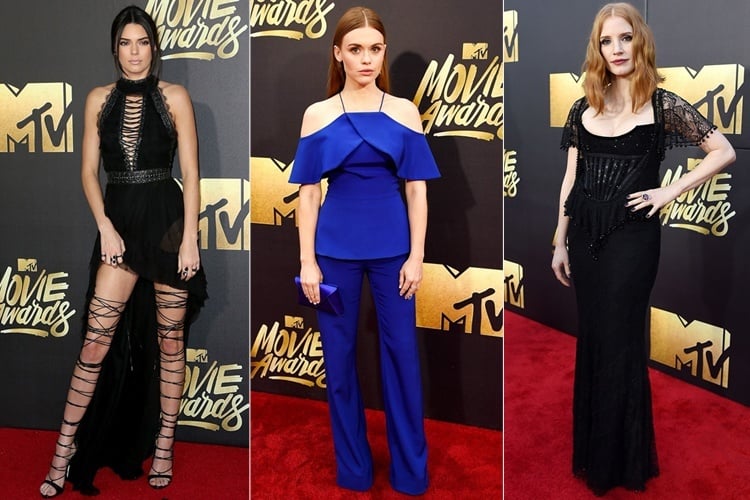 Once awards season are over, we hardly get to see all our favorites from the world of acting, music and modelling together. But thanks to the MTV Movie Awards for bringing the whole bunch together so we can ogle at everyone we love walking the red carpet. Even better, it is like most of them called each other and decided on the color black before going out shopping — Synchronization is always appreciated and with black we can never complain.

So this is a Movie Award, and I still start with Kendall Jenner? Yes, I do, because the girl just won the best dressed Award – like literally. And we should make a mention of the two assistants who helped her get those crazy Dsquared2 heels on. Next comes the high low Balmain sheer dress. Do you see how the lace at the neckline of the dress is just an extension of the lace from those boots? 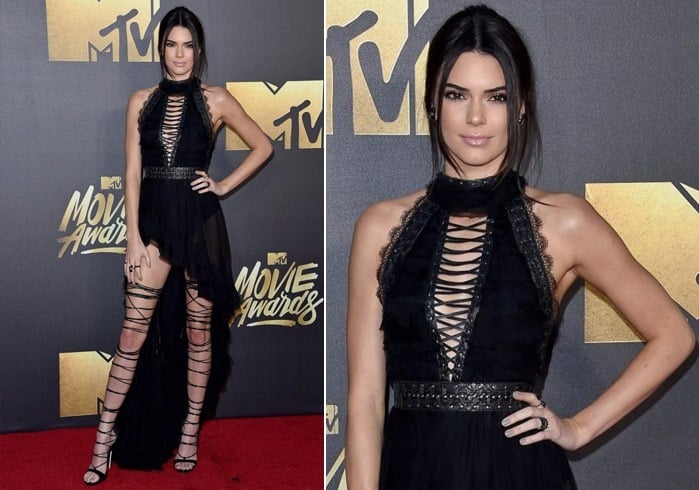 From one angel to another, Gigi Hadid made an appearance at the movie awards in a very corporate-esuq style wearing a Versace pin-striped power-suit. We are thankful to the yellow and black shirt for allowing the Anine Bing bra a peek a boo. Standing tall on Tom Ford heels, Gigi was rocking jewelries from Levian Sutra, and Antonini. Cara not only completed the supermodel squad, but was also a presenter at the show. Walking the footsteps of Gigi, Cara was channeling some business women vibes, except that her Balmain top and pants with their insane cut out were not very work friendly. Jimmy Choo heels resonated with the look that she completed with Hoorsenbuhs jewelry. 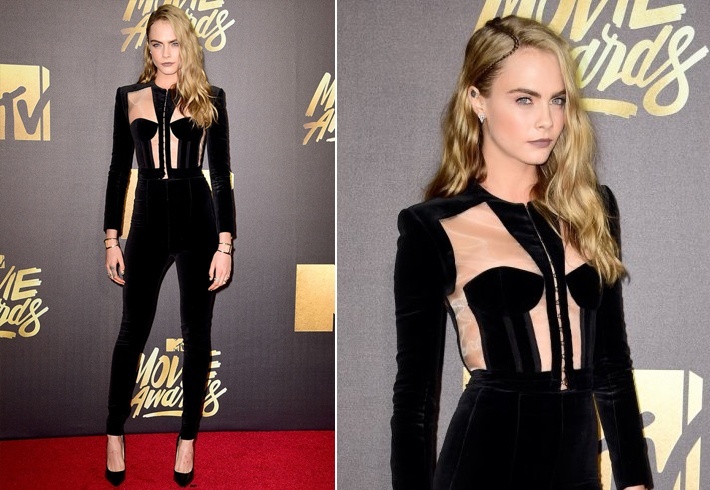 The 33 year old actress followed the all-black-everything pact and showed up in a stunning Sally LaPointe dress. The floor length halter neck dress featured some interesting fish scale work at the top. She accessorized with multiple bracelets and the Charlotte Olympia clutch took care of the rest. 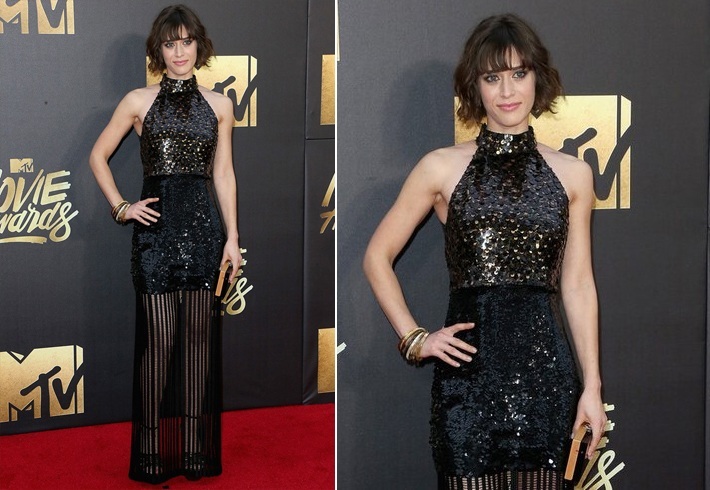 The next presented at the MTV Movie Awards who kept up with the black theme for the evening was Jessica Chastain. The Martian star was every bit beautiful in her Givenchy dress. The lace sleeves and the beads detailing at the top of the dress was splendid. The floor length dress hides it, but Brian Atwood heels added some height to the actress’s persona. She accessorized with Piaget jewelry. 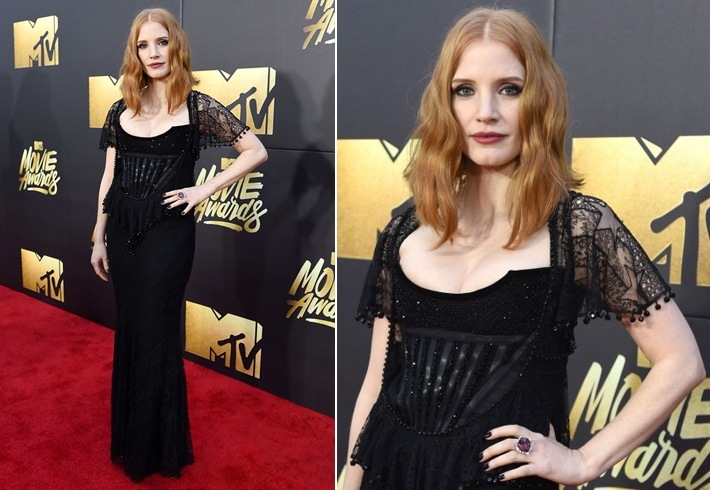 Being nominee of best female performance for Mad Max: Fury Road, Cherlize arrived at the star-studded occasion in an Alexander McQueen knee length dress. Though the lace dress covered the actress’s goodies with under layers, rest of the dress was sheer with some interesting detailing at the neckline and sleeves. She completed the look with Alexander McQueen clutch and jewelry by Solange Azagury-Partridge. The actress was sizzling and gorgeous in her red Haney dress on the red carpet. Doesn’t she look spectacular against the green background? The plunging neckline was indeed very sophisticated, and the sleeves looked more like a cape- or is it just me? She paired up the dress with matching The Myex Sandal strappy heels and is holding on to Ethan K Clutch. 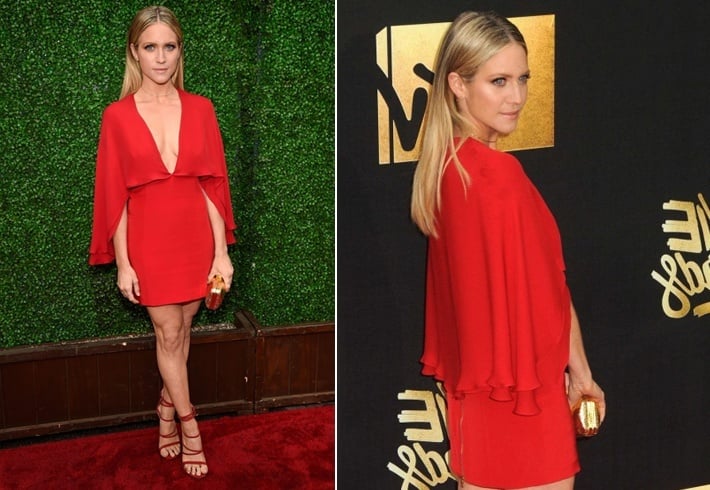 The celebrated actress attended the 23rd annual award show as a presenter in a sinfully sexy blue-black Noam Hanoch dress. I love how she is playing with lace at her mid riff and neckline. Her strappy heels were well-coordinated with the dress. Recognized for her breakthrough performance in the Star Wars: The Force Awakens, Daisy was present at the red carpet as one of the nominees. Alexander Wang seems to be a favorite among plentiful stars making an appearance on the carpet, and Daisy picked one from the designer too. She relied on Eva Fehren jewelry to add some bling to the look. Saving the best and the most unexpected one for the last, we have Ariana Grande channeling her inner Marilyn Monroe in a pink strapless satin gown and a fur stole. Her Le Vian diamond necklace along with diamond earrings by Harry Kotlar completed the Diva’s look. Being one of the few remaining awards shows of the season, the MTV movie Awards 2016, did really upset us in the style departments. In fact with the complicated shoes, all the lace dresses, all the black and blue and red carpet appearances were way beyond our expectations, weren’t they?

Here’s a Style Summary Of the Paris Fashion Week 2018!

Fisherman Bag Trend 2018 – Nothing Fishy About It!

Bollywood Stars Lit Up The Filmfare Glamour And Style Awards With...

Fashionlady - December 4, 2019 0
We are consumed a lot during the award season months in general and the recently held Filmfare Glamour & Style Awards 2019 was no...