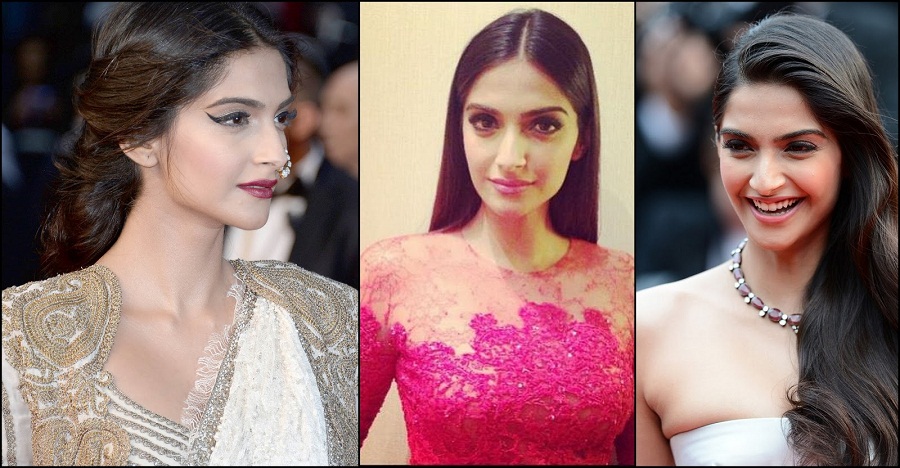 She is India’s Carrie Bradshaw, she is almost every fashion designer’s favorite not that she maintains a great body but she has a great fashion sense. The fashionably correct Sonam Kapoor can pull off any outfit at ease.

The every stylish Kapoor girl does a vintage Waheeda Rehman number effortlessly, on the other hand she walks in a Dolce & Gabbana at Cannes with elan. While designers like Masaba Gupta, Sheila Khan and JJ Valaya are heavily doting on her back in India, she is also enjoying her international connections at Paris Fashion Week with Karl Lagerfeld. What more I can say about this fashion diva!

Since these days I am recollecting some of the best fashion moments of this year, I decided to dedicate an entire post on our real life Carrie Bradshaw. Do have a look!

Name a brand that the girl hasn’t pulled off and name a trend her closet doesn’t flaunt it. Not only in India, but this fashion icon is creating waves globally as well. She is now a regular face at the front row in Paris Fashion Week and other prominent fashion events as well.

Whether it’s a cow printed Masaba Gupta saree or Sheila Khan dress or an Alexander McQueen gown, the girl looks ravishing, whilst getting the fashion enthusiasts drool over her each and every avatar. I keenly follow Bollywood fashion updates out of anxiety only to wait and see what Sonam Kapoor puts together next.

I have rounded up some of the best looks of this diva this year. Enjoy scrolling!

To complement her look, she wore a metallic necklace from her mother’s collection, high-heeled pumps in black patent leather along-with a vintage 1973 bag, all from Gucci to her Stardust cover launch.

Sonam Kapoor looked like a luscious and adorable mermaid, when she walked the ramp in a knitted body-hugging gown on Day 1 of the Signature International Fashion Weekend 2013. Apart from walking the ramp several times for her designer friends, including Rohit Bal, Sheila Khan, Anamika Khanna and Manish Malhotra, this was the first time Sonam was endorsing a brand.

When the India’s fashion brand ambassador was asked which international designer’s ramp would she like to walk as the show-stopper, she promptly replied,

“I think Jean Paul Gaultier, for sure! His shows are always such fun. I also love what’s happening on the American fashion scene. I love what Prabal Gurung is doing and Zac Posen as well. I like the new designers that are coming in. But if I had to go for an iconic designer, then it would be either John Galliano or Jean Paul Gaultier.”

Apart from showing up in Dolce and Gabbana gown and Anamika Khanna’s vintage saree at red carpet of Cannes, she chose a black tulle Alexander McQueen’s gown only to add some feathers to her glamorous avatar.

All hail the new Queen of Bollywood Style, Sonam Kapoor! – as Huffingtonpost puts it.

The 28 year of Bollywood diva looked stunning in a regal Alexander McQueen dress adorned with golden embroidery and a plunging neckline. She had styled her dress with a military-style belt and animal printed clutch.

The Ranjhana actress never shies away from experimenting with the runway looks, instead tight lips everyone as she shows up in a new avatar every time. Sonam showed up in a leopard print Jean Paul Gaultier Fall 2013 couture gown at GQ awards. The gown had huge side pockets and an exaggerated detailing at the hips.

The L’Oreal ambassador had paired the gown with a black leather belt and statement danglers. the silhouette complemented her personality, thanks to her envious height. She had worn her hair up in a tight bun with winged eyes to give a retro touch to her look!

Few months back, the actress was spotted in an icy blue lace dress from Dolce and Gabanna to promote her movie, Bhaag Milkha Bhaag. She had paired her dress with nude Christian Louboutin pumps and Outhouse chandelier earrings.

Whether it’s her masculine Dolce & Gabbana suit or her understated Barbara Casasola gown, the ever stylish Kapoor does not shy away to flaunt her ever-evolving style with various fashion houses.

30 Penelope Cruz Hairstyles You Could Steal

Fashionlady - June 15, 2015 0
Soft pink, romantic purple, sexy red, most of these colours are her favourites. But what is that one birthday gift which would woo her...