Awkward or Twinning, Celebrity fashion face-off’s are an inevitable part of the fashion circuit.

With great fashion minds thinking alike, every year we are faced with instances when two Bollywood divas stepped out wearing similar outfits. Deliberate or coincidental, when there be two bearers of one outfit, we are prone to get judgemental and draw typical “who wore it better” comparisons.

Let’s take a look at all those ditto moments from the celebrity spottings this year and you may decide for yourself who among the two carried the outfit better.

While Alia Bhatt’s style game has always been replicated, looks like this time the actress fell for Pakistani actress, Mahira Khan’s promotional look for her Bollywood debut. Beginning 2017, Mahira wore this white Lavish Alice outfit for her Raees promotional run up in Dubai. At the You Tube fest, later on, Alia simply replicated the look. Celebs love their Gucci’s. Showing some love to the Gucci tee were two B-town beauties. One was the Begum herself, Kareena Kapoor Khan who added all the luxe to her casual chic airport look, wearing the Gucci t-shirt with black leggings and white trainers.Sonal copied Kareena’s outfit idea, choosing to wear it with a 3/4th legging in place of ankle length. The judgment to this face off is definitely in favor of the Begum who knotted up the t-shirt upgrading her style instantly. Now there’s a reason we call her the ultimate Bollywood fashionista. 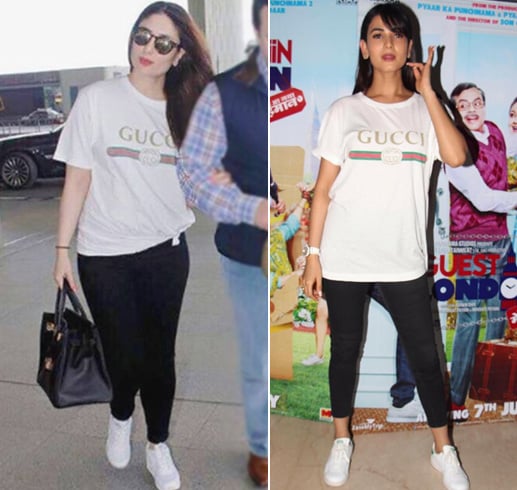 Earlier in the year, Aishwarya Rai Bachchan was spotted at the airport with daughter Aaradhya, wearing a blue Roberto Cavalli blazer. Ash wore her blazer with a pair of blue denim, black top, and a Fendi handbag.

Most recently Alia Bhatt was too spotted at the airport wearing the exactly same Cavalli blazer. Instead of black, Alia wore it with her pastel blue top and blue denim, upgrading the look further with her Andy Hindmarch. Both Malaika Arora Khan and Lisa Ray were caught wearing the same floral print tracksuit from the designer label Falguni and Shane Peacock. While Malaika wore the tracksuit with a white vest completing her look with a black Gucci backpack and white slip-on shoes. Lisa, on the other hand, wore it with a black vest and carried a tan tote bag. We have to give it to Malaika for making even a tracksuit look hot with added brownie points for that jacket tied onto the waist. 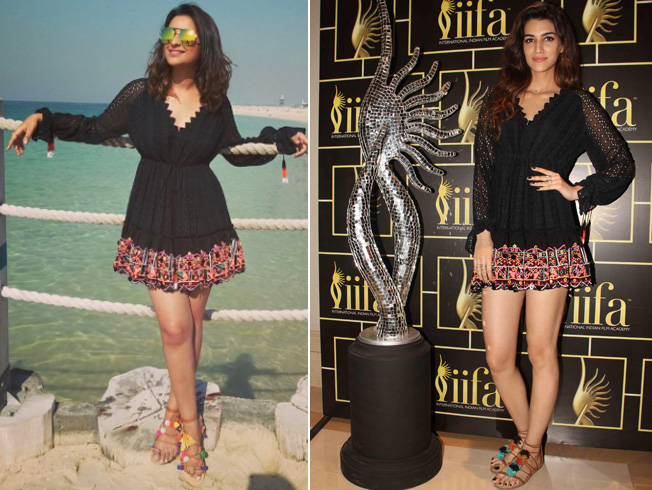 Their choice of colors may have been a tad different, but the fringed saree from the designer label Abu Jani and Sandeep Khosla went off the rack being picked by two tinsel town women, Twinkle Khanna and Sonam Kapoor. Twinkle Khanna opted to don the fringed saree in earthy beige for her attendance at the Hello awards night this year. For a brand photo shoot, Sonam Kapoor decked up in the same fringes in a soft pastel green version. We heart both. 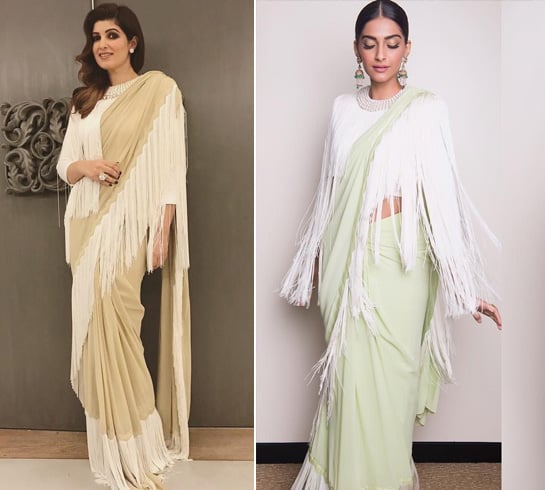 Apart from being star wives, Twinkle Khanna and Kajol, have one more thing in common to both the tinsel town divas and that is a Zara shirt dress. The fine checks overlaid with scattered bright flowers added more beauty to the casual style files of both the starlets. While Twinkle wore the dress with a pair of blown glasses and sandals, Kajol chose to don the number with a pair of cream frames and white slip on shoes. 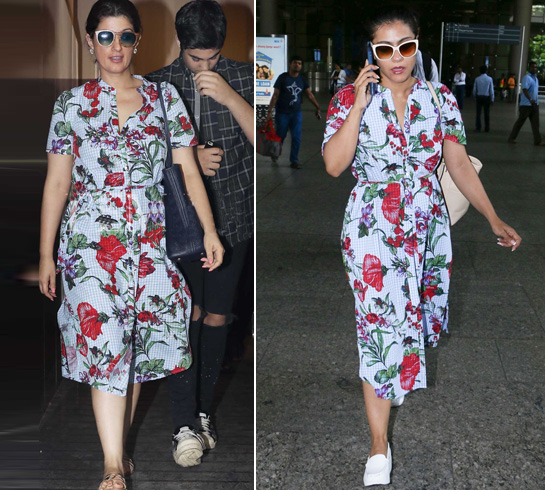 WIth autumn setting in it’s natural to move towards denser fabric and darker hues. Working both the autumn staples, Anushka Sharma and Sridevi suited up the velvet way. Sridevi was spotted wearing a pretty magenta velvet suit from the label Cactus. Stylist Ami Patel styled up the suit with a pair of magenta Jet Gems earrings and a black lace slip. What we missed though was that made to fit tailoring. Anushka’s suit up styled by Allia Al Rufai was more crisp and sharp. A more well tailored and buttoned up version, this brick red Namrata Joshipura suit was all stars.

Earlier this year, Bollywood’s current number one, Deepika Padukone stunned us with her edgy denim Designer Dionne dress. The one shoulder dress, with exaggerated bell sleeves Deepika wore to the Gillette Venus event this year looked every bit wow on the leggy lass. Most recently, Kajol sister, actress Tanishaa much inspired by Deepika opted for a very similar Rinku Sobti number with addition neckline embroidery. If you ask us, it was Deepika all the way, courtesy those never ending legs. While Deepika sealed the look with D&G tie up pencil heels, Tanisha chose to wear platforms. For the TANA 2017 in America, Tollywood and Bollywood actress Kajal Agarwal wore a one shoulder asymmetric beauty from the print master, Masaba Gupta. Stylist, N.K.Divya sealed her look with a pair of white sneakers.

Probably taking some cue from Kajal, at the most recent Lakme Fashion Week, celebrity Mandira Bedi wore the exact same dress. However, she preferred heel over sneakers to complete her fashion week look. Kareena Kapoor Khan along with sister Karisma added all the stars to Soha Ali Khan’s baby shower recently. The two went twinning in a Sincerely Jules khaki star print shirt.Karisma wore the shirt with a deep V-neck white tee-black denim and her favorite red sneakers. Karisma chose to wear it with a white round neck t-shirt, black denim and a pair of white trainers. We have to admit both the women from the Kapoor khaandaan looked wow. 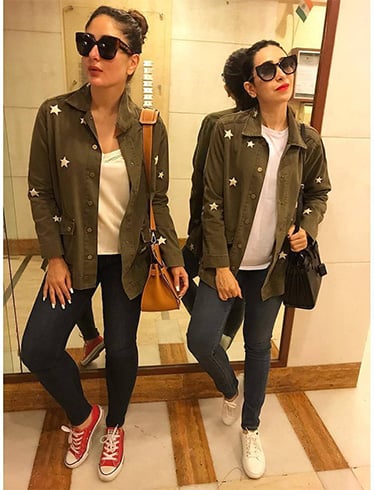 That was all the update from the most recent face-offs in B-Town. We wonder if it’s the age of twinning that is

Types of Kurti Every Woman Should Know

Sephora Hacks: Splurge And Save, Girls!