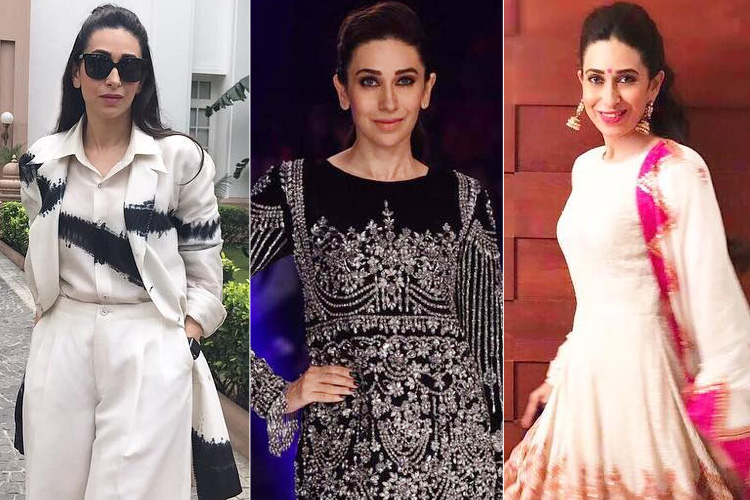 After a brief pull back from the tinsel town, the woman kept it low key for quite some time post which she began making a gradual comeback to Bollywood. Her movies may not have done well at the box office, but she is definitely grabbing the spotlight as far as her statement appearances go.

Last month, this Kapoor sibling was like everywhere giving us a whole dose of high street fashion with her back to back wow looks.Working some of the finest national and international designers, Karisma took us by much surprise.

With Judwaa 2 up for a release, a throwback to the first one is almost a mandate, which only makes us realize the woman has transformed herself into an absolute diva in these last 20 years. While we loved our “chalti hai kya 9 se 12” girl, this new avatar of Karisma is leaving us speechless.

We cannot help but oogle and “google” her appearances, like again and again.

For an event in Delhi, Karisma Kapoor decked up the classy way in an Anamika Khanna number. A draped black silhouette topped with a statement embellished jacket from the label added all the power to her persona. Afterall you don’t tell this woman how to work the black magic. Keeping the edgy outfit in mind, Stylist Eshaa Amiin styled up this look with a top bun, a pair of black block heels and diamond studs. One power packed look there. Karisma has been showing some love to her denim culottes. But while in Delhi for an event, Karisma manned up in a white suit from Bloni that flaunted an impressive tie and dye streak of black on the blazer paired with white culotte lowers. We loved her casual and comfortable, day out suit up. To add some extra comfort to her monochrome soiree Karisma booted up in a pair of white attention seeking sneakers from the premium label Burberry. The woman sealed her day look with a half hair man bun and black shades. Impressive! Karisma made headlines with this stunning appearance. While Mumbai was braving the dark courtesy the heavy downpour, Karisma shone brightly in a Saaksha and Kinni outfit. Stripes meet embroidery meets glitter rush is equal to a breathtaking appearance. Credits to stylist Eshaa Amiin for styling up the diva in muted brown tones from the label draping her in their “Armourage” sequinned pencil skirt set with a embroidered shirt. The outfit got an instant lift with the brands signature metal embroidered striped jacket. Keeping her accessory game just right, Karisma sealed her look with a cocktail ring from Minerali Store. 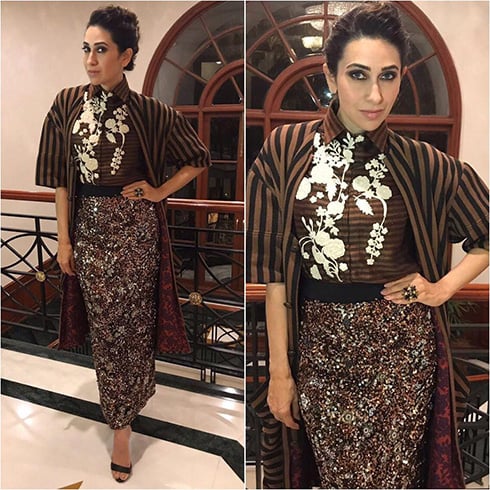 The elder Kapoor sibling had the camera flashes going at the star-studded Ambani’s Ganpati celebrations with her desi swag. Wearing a white Anamika Khanna anarkali with a dash of festive brights on the edge, Karisma swayed away to top the best dressed at the Ambani soiree. Stylist Eshaa Amiin yet again putting her best talent to use, styled up this exemplary ethnic wear with a pretty pair of jhumkas from the house of Jet Gems. 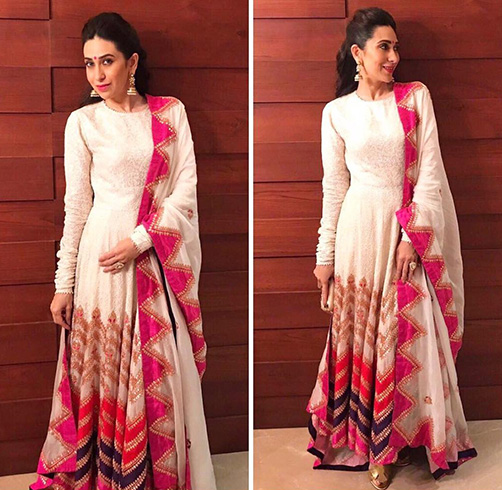 Karisma was all shining and sparkling at the Lakme Fashion week finale this season. In a dazzling LBD Karisma transformed into the most splendid showstopper. With her hair tugged into a beautiful side parted ponytail, the woman allowed her mesmerizing starry outfit to be the show stealer.It has to be breathtaking and blingy when the man behind the splendor is Manish Malhotra. Karisma ended the LFW with a bling bang making us go ooh la la! 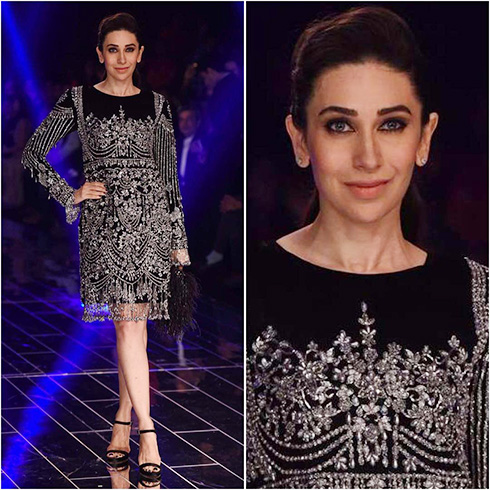 World’s number one fashion blogger Chiara Ferragni has turned designer with her most exotic yet wearable collection and celebrities are donning her creations especially her shoes across the globe. Karisma too looks lovestruck with this label. For her brother-in-law and star Saif Ali Khan’s birthday celebrations, the lady dressed up in a khaki shirt. The catchy sparkling patch almost fell like lightning on her shoulders. Thunderbolt indeed. Karisma layered her statement shirt over an all black look. To seal the deal the Ferragni way, Karisma wore the favorite shoes from the designer’s collection. Her all sparkling wink pair of shoes. We absolutely heart the party vibes the woman exuded wearing this look. Karisma flaunted a one-of-a-kind fun vibe wearing this pretty piece from the Parisian designer house, Paule Ka. Donning the princess cut gown in muted golds and white for her working weekend in Delhi, the star added more charm to her suave and fun persona. The dark golden escapade lined with ivory flower scatters gave us all the Cinderella feels. With her tresses braided in a beauty, Karisma gave us major hair goals. With a pair of golden peeps from Alexandre Birman, the actress rounded up her fairy look. 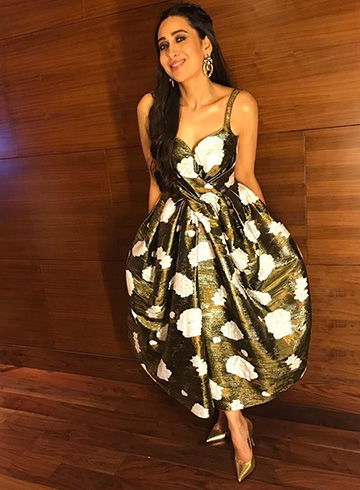 There are times when you carry an outfit, and then there are times when the outfit carries you. At the Vogue Beauty Awards night, 2017 actress Karisma Kapoor was struck by a situation like this. Looking fierce, sexy and absolutely gorgeous was Karisma in an outfit from the house of Amit Aggarwal. This bodycon meets ruffled edge looked futuristic sorts with her torso almost wrapped up in wires. Credits to Karisma for working a typical runway number, off the ramp with such ease. We did say this Kapoor girl made just the right choice for executing her judging duties with full might. Indeed the woman made a strong fashion case with this one. 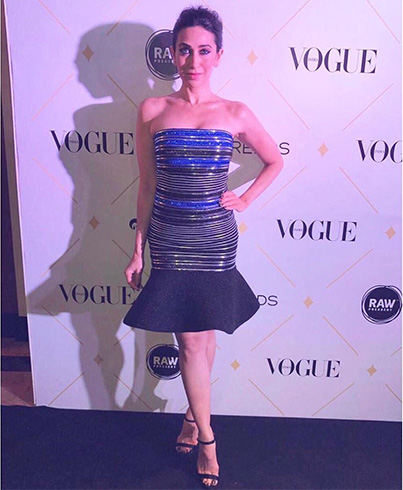 Karisma Kapoor amped up her Bengaluru work mode, wearing a pretty exotic look. As the woman enjoyed the Bangalore breeze we couldn’t take our eyes off her beachy printed skirt from Daniele Carlotta. Causing an almost fashion blast was the shiny gray metallic top pairing from the label. A deviation we much loved. Adding more exoticness to the look was the bright pair of stilettos with pom poms in happy neons from Sophia Webster. Karisma totally stepping up her style game giving us major high street fashion goals. 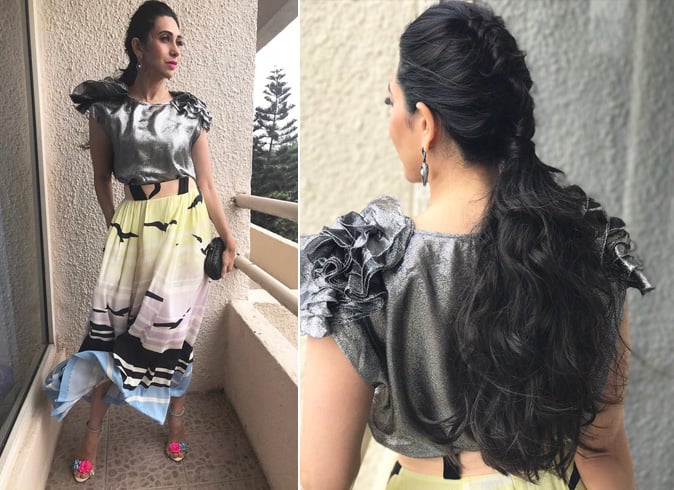 For her invite to the birthday bash of Arbaaz Khan, the ex-husband of Kareena’s bestie Malaika Arora Khan, Karisma glammed up like a total party hopper. Wearing a black one sleeve top, which was all the way sequined from Pinko, she tip toed into the party with all her shimmer and sparkle. Not to miss those black Tamara Mellon ankle boots which perfectly played their part in multiplying the glamour quotient. With her manes pulled back in a pony, a bright red lipstick adding more shine to her face and a black Hermes clutch, Karisma owned her all black party look. 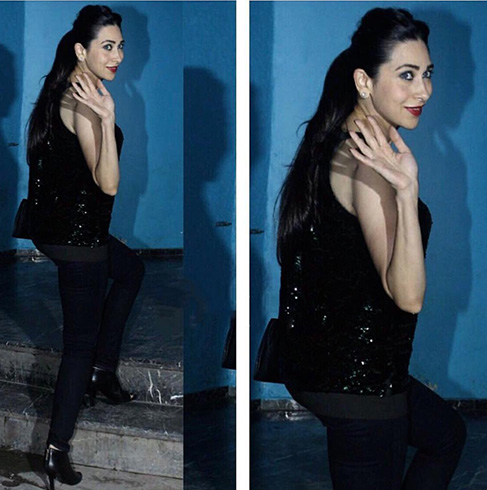 With such head turning appearances this woman is making a strong case in the B-town fashion circuit.

12 Awesome Benefits Of Apple Juice For Hair, Skin And Health

How Therapists Analyze Your Mental Health – An Insight