The Amazon India Fashion Week 2017 has kick started, and we have fastened our seatbelts to witness fashion at its best.

At a new designated venue, The Jawaharlal Nehru Stadium, the capital is all set to experience the extravaganza over a span of four days, from the 15th of March, with Tarun Tahiliani and Amit Agarwal, bringing the curtains down on the 19th of March.

With handlooms being the focal point, this season will be a celebration of the indigenous handlooms and textiles of India. With Indian fashion graph observing a paradigm shift towards structured and minimalistic fashion, exploring new and rekindling the rich textures of the past has become almost inevitable.

Staying true to the Indian ideologies and ethos, a convoy of 71 ace designers will pay a befitting tribute to the weavers, interpreting the weaves in their most exquisite and dapper, ready to wear forms. With heavy weights like Anju Modi, Shivan and Naresh, Vineet Bahl, Rina Dhaka, Pankaj and Nidhi, Anupama Dayal and the likes to take over the ramp, the audience is sure to be galvanized.

The Amazon India Fashion Autumn Winter 2017, Day 1 was an ode to the Indian handlooms. With the sole motto of reviving and enlivening the traditional textiles ad weaves of our country, celebrated designers took to the ramp to present the rich culture and heritage of Indian textiles in their full glory.

With handloom being the buzzword, the Amazon India Fashion Week A/W 2017 opened with a special screening by The Handloom School in association with the famous decor brand, Good Earth.

The runway resembled a garden setting with a luscious green escapade decorated with flower bunches all through the way. The one of a kind runway looked splendid and refreshing as the models took to the ramp, barefoot.

A troop of 13 designer labels-

The key highlight of the show lied in the fact that, instead of wearing one designer, the models wore pieces from a combination of designers, styled up to create one spectacular look as envisioned by the lead stylist Kshitij Kankaria.

Oversized boxy silhouettes, bandhgalas for women, asymmetrical blazers set in a color palette of blacks, whites, yellow, and greys with hints of pink, navy and creams, added all the contemporary and chic quotient to the age-old textiles. 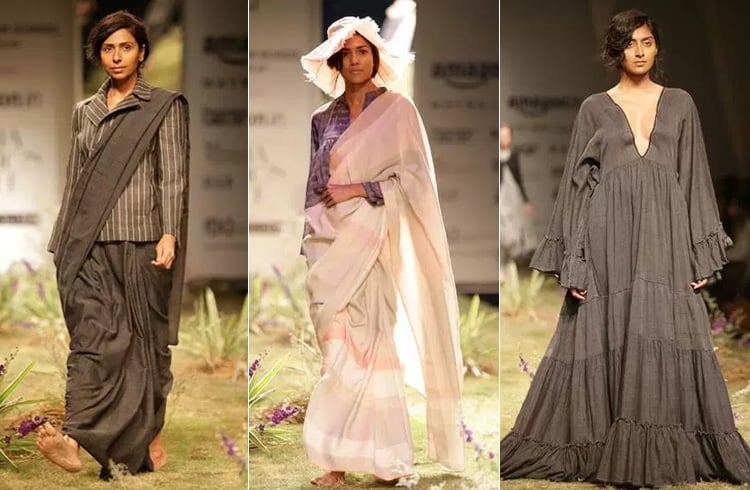 In an attempt to strengthen ties and enrich the partnership with Jakarta Fashion Week, a special show, Novita Yunus’ Bami-Langit dedicated to the Indonesian textiles and techniques, was scheduled for showcasing on the Day 1. The show presented a great opportunity and platform to encourage cross cultural exchange of talents between the two countries. 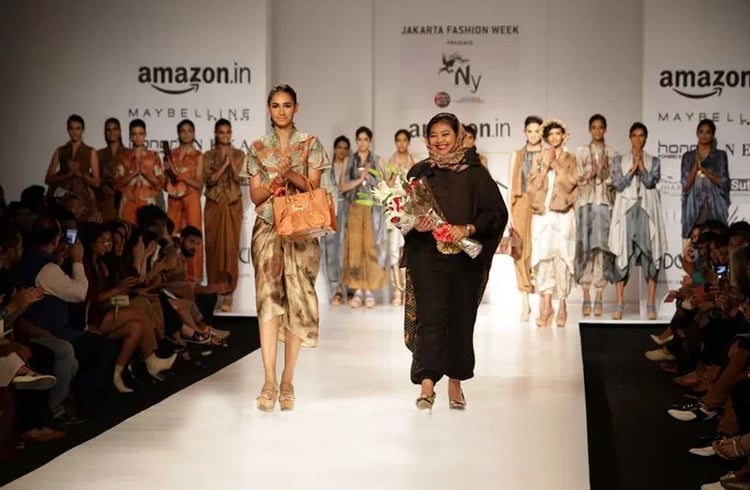 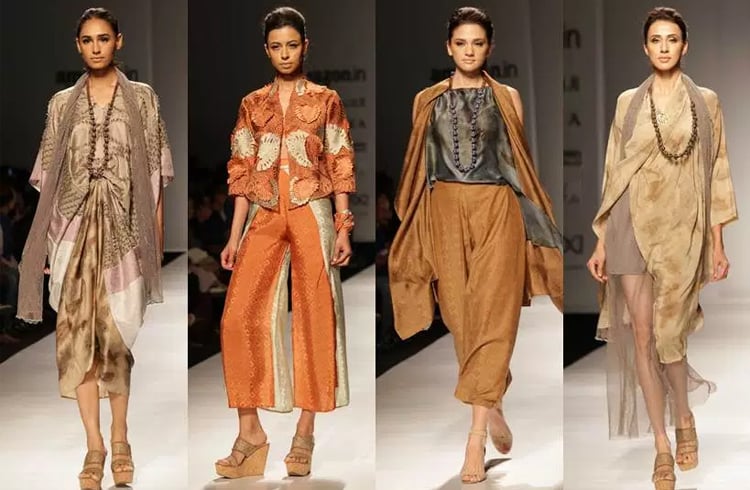 Celebrating 30 years in the industry, designer Madhu Jain took the ramp on Day of AIFW A/W 2017, sharing space with designer Krishna Mehta. Madhu, who has been a driving force behind reviving indigenous crafts and textiles, presented a collection alongside Krishna Mehta who gave a pleasant surprise to the visitors with her interpretation of the Maheshwari fabrics. Courtiers Abraham and Thakore played with the irregularities of the Indian textiles, presenting a collection working with hand woven and hand printed cottons. 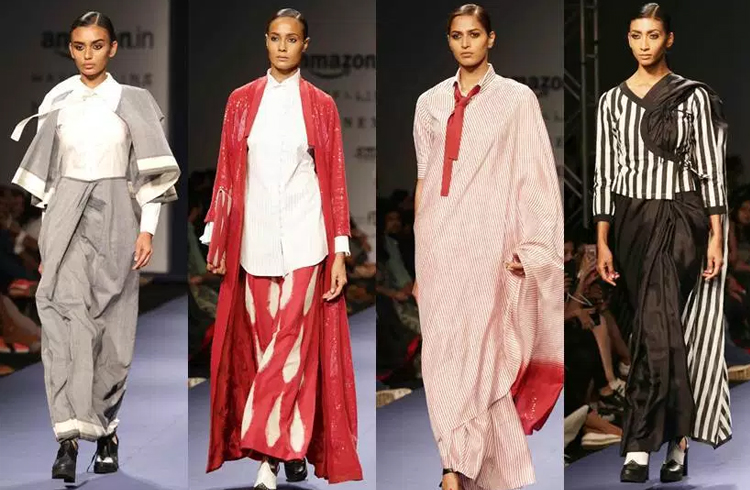 Jharkhand being the Partner State for the Fashion Week this season, a showcasing dedicated to bringing back the famous Tussar fabric was scheduled on the opening day. Designers like Rina Dhaka, Pinnacle by Shruti Sancheti, Dabiri by Divya and Ambica and Shana N.C presented their visions onto the ramp. The show was primarily aimed at creating a source of employment for the weavers hailing from the state known for its handloom legacy. 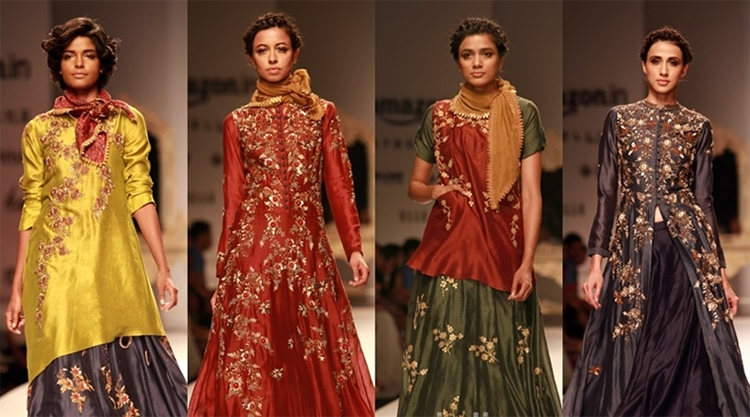 To mark the 10th anniversary of Vogue magazines, Indian edition, which has today assumed the status of being the bible of Indian Fashion, the visitors were treated to a unique showcasing curated by Vogue India.

Titled, Saree 24/7, the show was aimed to promote the Indian drape showcasing it in its most fetching forms. 50 designers presented a la mode versions of the saree, to reintroduce and bring back the fervor for India’s iconic six yards. With Vogue settling for the hashtag #VogueHeartsSari, the purpose behind was loud and clear.

From floral to golden embellishments, from bright, to blues to gothic, the ramp was filled with the creativity of the designers formulating the classic Indian drape in its urbane forms keeping intact the soul of a sari. With every drape boasting a character of its own the fashion connoisseurs were treated with a myriad of draping styles. That was all the update from the Day 1 of the AIFW A/W 2017. With such a splendid beginning we have our eyes on the upcoming showcasing. Watch the space for updates.

How To Dress For A Job Interview With Style

Looks Like Deepika Padukone’s Party Was All Music, Fun And Rock...