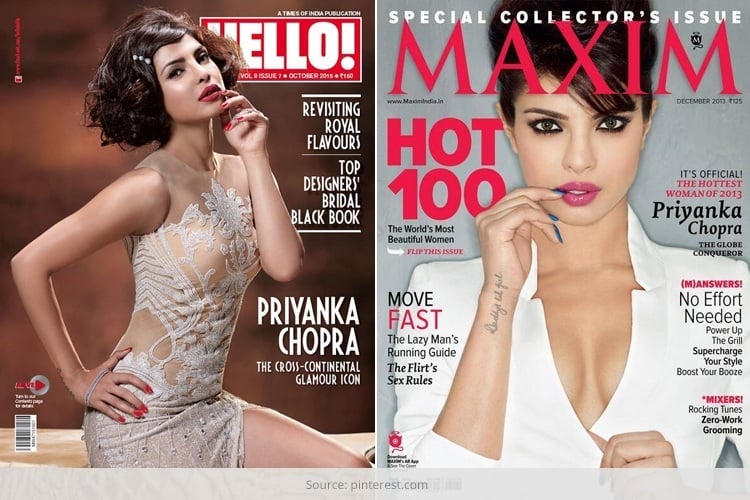 She has bowled us with her beauty, talent and awards time and again from her Fashion film days. She is the first Indian actress to become the face of Guess. Today she is on a global platform having walked the red carpet at the 88th Academy Awards, the Oscars 2016.

So when you see priyanka chopra magazine cover you can instantly realise how miles ahead and inspiring has been the career graph of Priyanka Chopra. She not only won the People’s Choice Award this year and bagged a role in Baywatch, she is proudly today an Elle diva. No way you can miss out her fierce looks as she features on the cover of popular fashion magazine Elle USA in February this year.

Let us do a scan of latest magazine covers of America’s most wanted Priyanka Chopra and find out how she is able to stun you till infinity.

Daddy’s lil girl PC was all over the cover page of Elle USA in February this year. Why Priyanka Chopra Elle cover could not have been missed is that she is not just a Quantico star but the one who says “Why should a woman have to pick between global domination and having the love of her life?” Surely Priyanka has pots and pots of determination to feature on international magazine cover.

There are two reasons why this Filmfare magazine issue of February 2015 is explosive. One is that Priyanka sets fire with her sequined varsity jacket. The second being she talks about her one-sided love and having a baby this year. Which is why Priyanka Chopra Filmfare magazine has an apt caption on the cover “Explosive”!

This anniversary special focuses on India’s 50 Most Beautiful. And Priyanka Chopra obviously is one of them featuring in a Manav Gangwani dress. Which do you think is seduction material – the actress wearing it or the dress?

The Power Issue that it is, the Femina issue of Sept 2013 becomes Superpower material with Priyanka Chopra becoming the cover girl. She looks pretty hot in black polka dotted body hugging outfit.

In this Priyanka Chopra magazine cover of Harper’s Bazaar, Madame PeeCee pulled off a Dolce & Gabbana dress with so much fierceness, you might have to think aloud of her killer looks which have had the whole world asking for more.

Priyanka surely knows how to rock the world as says the GQ cover of Dec 2012. The black bustier and biker gloves make her look scorching hot on this magazine cover.

Won’t it be a treat to find out the Priyanka Chopra you didn’t know? In the November 2010 sari issue of Vogue, PeeCee looks simply ravishing in Louis Vuitton dress made of brocade.

This Priyanka Chopra magazine cover of Beauty Magazine has the look of a true-blue bindaas babe dressed in a white top and blue denims.

The theme of this magazine was ‘Power of a Woman’ which showcased a day in the life of an actor such as Priyanka Chopra. It not only is the hottest cover of Harper’s Bazaar, it is classical and elegant too.

If you have recovered from the sheer magnetic effect of magazine covers showing Priyanka Chopra, then tell us which of them bowled you over.

11 Flax Seeds Benefits For Lose Weight And Get Healthy

How To Be A Quirky Bride