While one end the Fashion Week are happening creating new dimensions and outlooks to fashion, on the other end our celebrities are making style statements on the Magazine Covers looking eye catchy and confounding us on which to follow. So here we are to give you a small peek into the rocking Magazine Covers for the month of April.

The all-time favorite ‘Rachel Green’ from FRIENDS, whom people love even till today, stars on the magazine cover of Harper’s Bazaar April edition looking fabulous as ever. The insanely beautiful actress blocks your mind and puts your heart on a race with her astounding stills. The ‘Mother’s Day’ actress being a 47 year old, posed so bold and looked so youthful with her well-kept physique and glowing skin. Wearing an Anthony Vaccarello gown in silver with an airy scarf, she posed on the cover with a dazzling smile, sparkling green eyes and the hair giving a blowing sexy feel. Looking like a Goddess of sea, she posed in the clear water flaunting the curves in a black Versus Versace gown with side cuts. 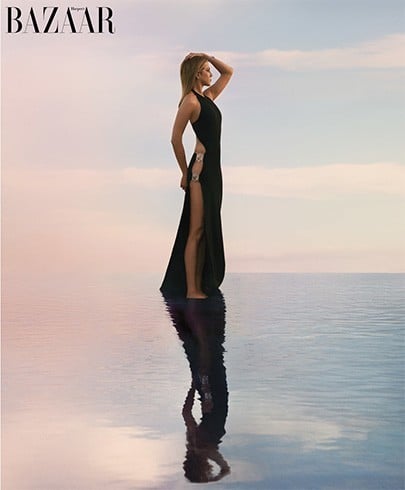 She dressed in an Alexander McQueen dress in lace with a bold attitude. The sheerness of the dress would definitely be the talk for a while, and the spectacular color combination played well with the hawk becoming the highlight of the shoot. Commendable work by the photographer Camilla Akrans who brought the well sculpted features of the actress upfront in the most beautiful way.

The American mega model who was declared by Vogue Paris as one of the top 30 models of the 2000’s created magic on the Elle Australia Magazine Cover April 2016. Both Jennifer and Karlie’s poses look quite similar. The hair just flaying in style and the piercing marble eyes, the blush of being kissed teamed up the right way and in right proportions toppling us off our feet. The rich striking wine red sheer and tassled dress that she donned, struck a bolt of lightning to the supermodel. Wish we had more of her photo shoot to share with you. Kai Z Feng, the photographer brought the best of the strong woman. It’s no surprise to see Priyanka Chopra hitting the Vogue, India Magazine Cover this April with the attention she is grabbing from all directions. Spinning every stone her way, she is headed to being one global icon that the world will admire to the fullest. She dressed in a Chanel red, white and blue outfit looking super cool and seductive at the same time. She added a pair of bangles to the ultra-cool look and set up a playful mood. Since her traveling around is way too much, the air planes on the outfit suit the theme immensely.

In another shot, she looked sporty in an Ashish top and American Apparel bodysuit. Adding Gucci shoes and Uncommon Matters Rings have an American flag theme colors portrayed in bold. 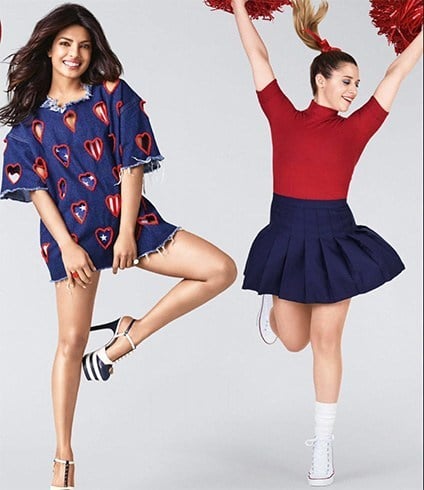 Conquering the world with her stand out looks, she posed in a Prada dress and jacket with Laperla Lingerie. The deep V-cut Marks and Spencers bra topped by a sheer jacket looks attractive. Also in play are Aqua Zurra sandals and Karen Walker earrings. 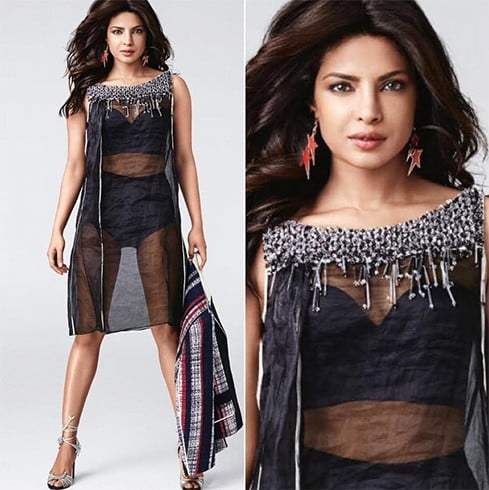 The first lady from the ‘House of Cards’ marks her style on the Harper’s UK Magazine Cover with a pleasing demeanor. She wore a Ralph Lauren Collection dress with Tiffany and CO jewelry.

She is one such celebrity who can carry the hairstyle with a great attitude. The damsel through the photo shoot, attired in utterly summery colors. Sitting with a look of innocence and an attitude that the world is on her tips, she dressed in a Boss dress with Jimmy Choo heels and Tiffany and CO bracelet. All pieced well together to bring a light on the actress. 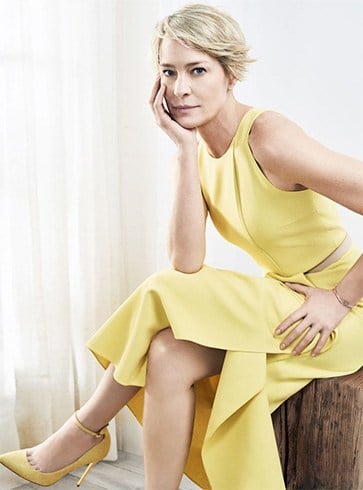 The actress also was clicked donning an Indian designer, Prabhal Gurung dress. Adding Cartier jewelry to the already extravagant look of the gown, the actress looked so pretty that anyone would fall in love with her. 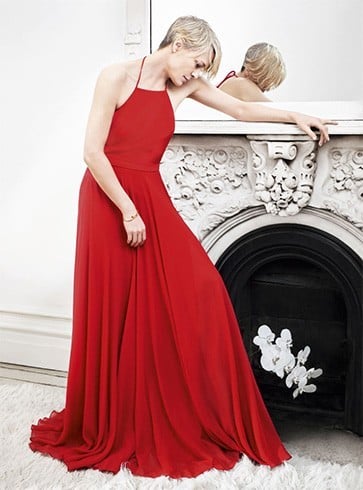 After her sensational cover shoot on the Femina, India, the diva took over Grazia Magazine cover for April 2016 looking mind boggling. The looks varied immensely just the way her acting works demonstrated. Dressed in Michael Kors blouse and adding the Nirav Modi ring, with a dark maroon lip she built an image like none other. 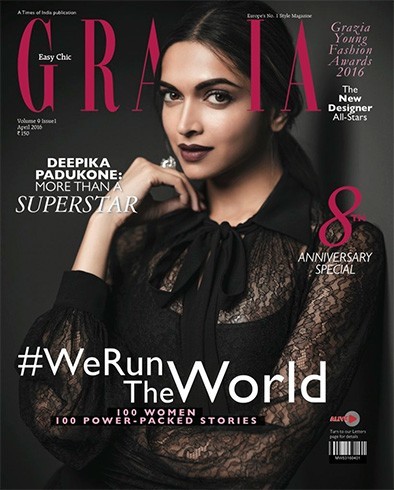 Rihanna In Vogue US

The 28 year old singer who touched many souls with her amazing songs, has rocked again on the Vogue, US April edition taking the fashion province a notch higher. She was wearing a vintage Guess leather biker jacket over a gray Star Wars T-shirt and green Vetements sweatpants. 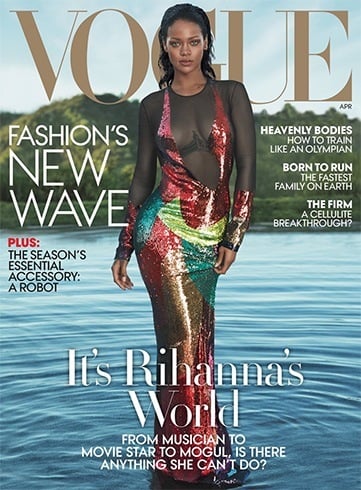 The hair had a gel applied look, and keeping the same hair do, she pulled off with sexiness; a Hedi Slimane sequined dress, a Ralph Lauran Collection dress with Anita Ko ear cuffs and also a Riccardo Tisci dress. 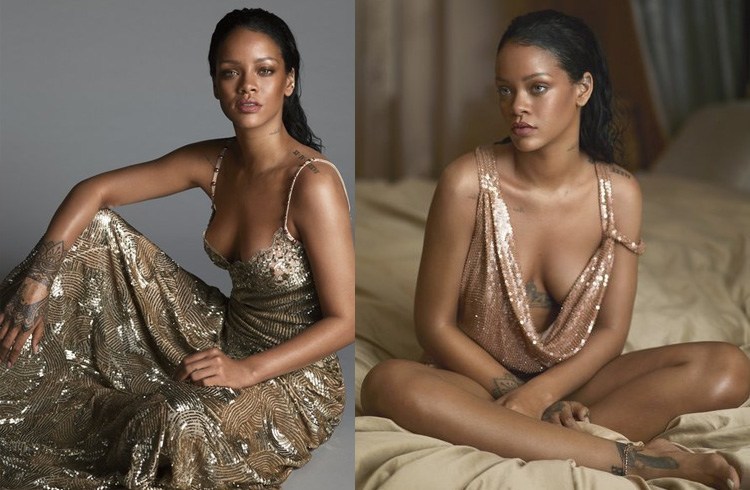 Dressed in a soothing blue Erdem dress, Kristen Dunst looks utterly peaceful and ravishing. The tassels here and there added bit of glamor to the sober look. The sheerness of the dress with the high slit was designed to project the diva’s complexion and beauty way too high. Take a look at her photoshoot here: 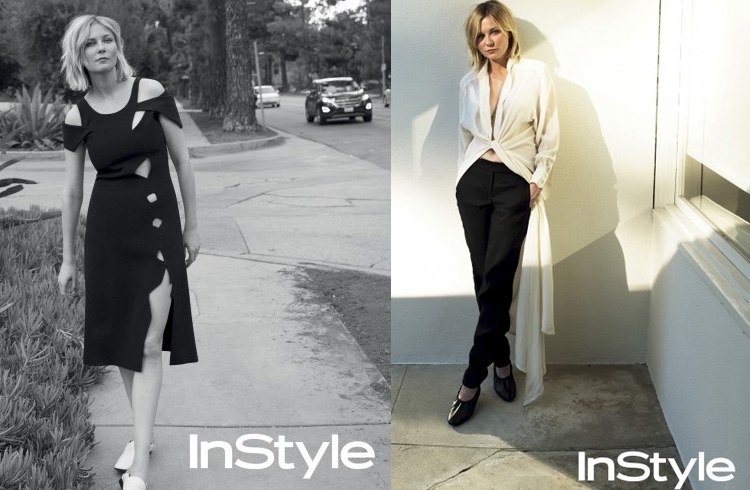 Jacqueline who is making a wide range of fashion statements is all set with her new avatar on the Juice Magazine Cover April 2016 edition. Dressed in a white jumpsuit from Topshop, and tying her hair into a half bun she showcased a cool, summer chic look but the yellow eye makeup created a raunchy and heart stealing look altogether. Creating a hustle with the ‘American Hustle’, Amy Adams took the spotlight on Allure, April 2016. Dressed in vibrant silk georgette dress by Michael Kors, the blue eyed actress with her red hair looked refreshing. Showing her skin through the photo shoot, the diva made a clear statement that she is as sizzling and smoking hot as everyone else. Clicked by Ram Gibson, she looked a delight all through. Take a look at the photo shoot here: 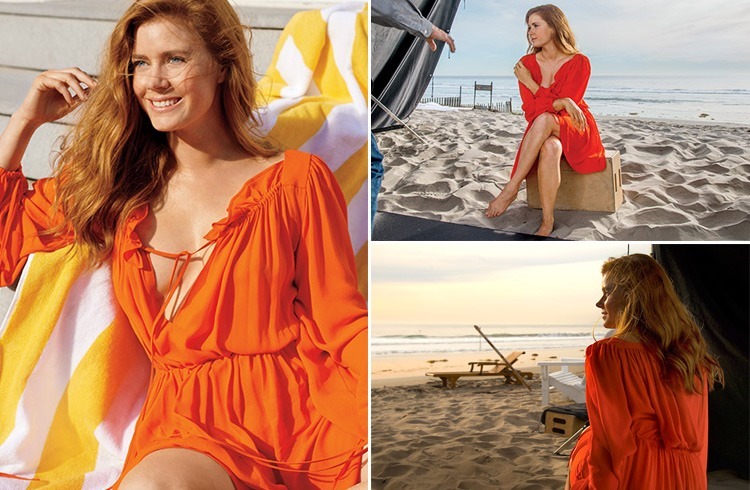 We hope you enjoyed this post on Magazine covers.

Beauty Alert: 5 Makeup Tips Everyone Must Follow This Season

Kangana Ranaut – The Queen Of Fashion Unplugged In Magazines For...

Fashionlady - January 11, 2016 0
It’s difficult to forget her talk, walk, and shauk of delivering hits after hits. This lass from Himachal has rosy cheeks, is stubborn and...