The Italian fashion house Dolce and Gabbana have stepped into unchartered territories and needless to say, the whole world is embracing the idea wholeheartedly. Dolce and Gabbana have launched their first Hijab and Abaya Collection. The first of its range for Muslim consumers, this one has signature Hijabs and Abaya in their contemporary prints and abstract designs.

Take a look at the collection which was recently launched in the Arabian website.

The proud news was announced by designer Stefano Gabbana who broke the news on his Instagram, captioning photos of the collection, “Dolce & Gabbana the Abaya collection #dgabaya.”

[Also Read: How To Style Hijab]

The full collection is available, as we mentioned before online for purchase. The georgette, chiffon and satin weave fabrics are one of a kind and are appealing to the Muslim clientele who would now be able to flaunt their hijabs and Abayas which are actually from one of the biggest fashion houses in the world! 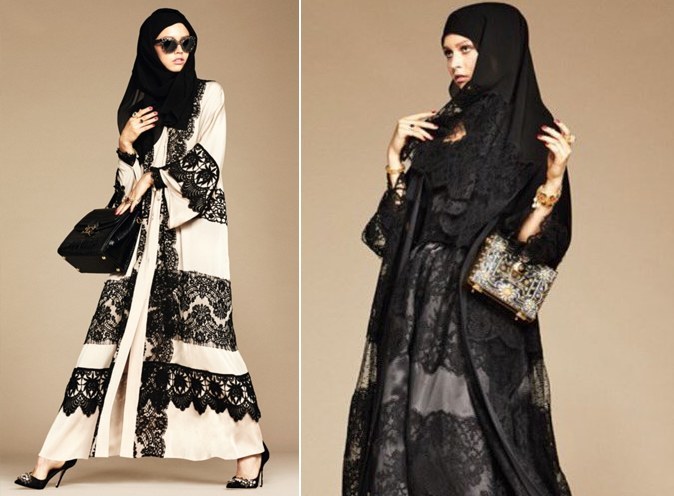 As you can see, the Hijabs and Abayas are not just like any other collection. They have delicately trimmed lace on the hijabs and their signature daisies and lemons (which were sprinkled very generously on the Spring/Summer collection of 2016). The fashion house proudly proclaimed that their latest launch ‘’celebrates the inimitable dolce vita that is distinct to us in the Arab world,” which we think is pretty true considering the fact that no other fashion house has yet stepped into this territory yet.

What’s the most common feature?

Well, it’s Dolce and Gabbana, you would expect them to have some of their distinct features, right? One standing feature that you would see in their designs is the presence of neutral colours and a lot of black, black being mostly in the form of lace trimmings. The brand echoes dramatic neutrality and hence, some of the hijabs ad abayas in their collection have a heavy dose of embellishments.

Though the collection is much coveted right now, the fashion house has not yet released a statement of their prices and whether they would be available all over the world instantly.

Besides this, there has also been a lot of criticism about the fact that even though they have proudly advertised their wares, none of the models are actually Muslim ladies. “There’s the question of casting. A press release from the fashion house described the clothes as an enchanting visual story about the grace and beauty of the marvelous women of Arabia, but the model is still a white-passing woman that might not even be Muslim,” Amani Al-Khatahtbeh of the fashion blog MuslimGirl.net pointed out.

Quite possible, but we are just happy about the fact that someone decided to take a step into this world and ensure that even women from the Muslim world now have Dolce and Gabbana in their wardrobes to flaunt as hijabs and abayas.

Besides a couple of critics laughing at the idea, most of the netizens, especially those from the Muslim Caliphate are happy to see the new launch.

[Also Read: How To Wear Hijab With Earrings]

As we mentioned before, Dolce & Gabbana is one of the first high fashion brands to actually create something, which is exclusively for the Muslim market. This is actually a very smart move because at this time the Muslim fashion is forecasted to be worth $327 billion globally and by 2020 it is expected to rise even more. We are predicting other high fashion brands to soon follow suit and would want to see women sporting Hijabs and Abayas from Chanel, Gucci and the likes!

7 Ways To Kill With Side Cut Out Dresses

Celebrity Tattoos And Its Growing Craze

Fashionlady - November 10, 2013 0
Since time immemorial tattoos have been circulating the human race. The tattoos, which started as a trend among the tribes and went on to...