It’s the Valentine’s month folks and the air looks a little more pink than ever. Color is the talk of the season and color is what our favorite magazine are all about. Let’s check out February 2016’s Indian and International glossies and take a note of what’s hot and what’s not!

Filmfare magazine features Sonakshi Sinha on the cover of its February 2016 edition. The lens was on the hands of an utter gentleman who kept the focus all above neck. We don’t complain if we get to see the girl’s pretty face. Sona graces the mag cover in her signature Desi look. Keeping the make-up less, she wore some envy inspiring beachy waves. But what set the mood of the click was a zillion different bracelets which she bundled down her wrist. The look was meant to highlight some rustic jewelry and hence that heavy silver neck piece. By the way, once you are done ogling at Shotgun junior, slide your eyeballs to the headline that reads Priyanka Chopra is in a relationship. Woa! 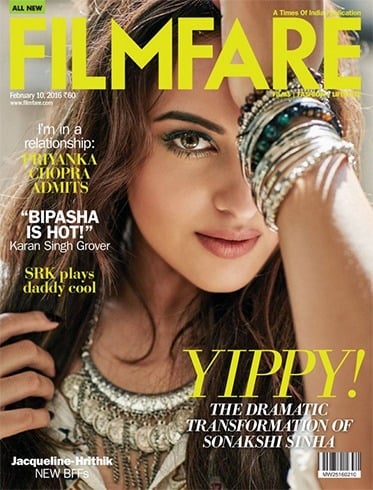 Priyanka Chopra on Elle US Julianne Hough fugs the Cosmopolitan cover, posing in a sexy black body suit teased with hints of white pattern all over. If that wasn’t enough, she goes on to emit the super naughty smile like you know she is hiding something. But there isn’t anything hidden as the country singer reveals tons of details of her love and sex life on the pages inside. While Priyanka sets Elle US on fire, Kareena Kapoor Khan is a waft of gentle breeze across a sunny meadow on the Indian edition of Elle. The bright floral Tommy Hilfiger jacket and the peachy pink make-up hints that spring is here already. To add to the context the begum wears her hair carelessly blow dried. The chunky Valliyan earring well matched the floral mood of the mag cover too. The essence of spring is pretty emphatic on the cover of Marie Claire as well. Adding some sparkle to the February 2016 cover, Chloe Grace Moretz, poses in her soft blue see through sequin attire from Gucci. The look on the teenagers face is nothing but pure romance, and the red flower tucked at her neck, brings more vibrancy to the dreamy look. But, is it just me, or every other star is religiously wearing the beachy waves on this month’s magazine covers? And in other news, we have Reese Witherspoon, flashing her 500-watt smile and some heavy weight diamonds on the shining cover of Harper’s Bazaar. Keeping up with the flavor of the month, the actress arranges her side swept hair in barrel curls. The only thing that upsets us about this cover is we are denied a full view of the gorgeous red dress from Michael Kors Collection, the blond bombshell rocks. The deep ‘V’ of a neck tried to make up for it though. Aren’t those the tiny flowers stuck on the outfit are beyond surreal? Bhumika Chawla makes a statement of ultimate fashion attainment in this Louis Vuitton Spring 2016 outfit. A girl rocking the international runway with oodles of confidence does the proper justice to the multicolored attire by keeping the zipper unhooked till her midriff. It’s such a fresh feeling to see something other than Bollywood gracing the cover of Vogue India once in a while. These eight glossy magazines aren’t going to be sitting on the stalls forever. So before they are all gone, you better run to the nearest book stall and grab your copy today. They aren’t just a one-time read for sure, each one of them are going to be a collectors’ pride.

Check Out The Brilliantly Featured Magazine Covers Of September 2016

Fashionlady - September 1, 2016 0
Another month has passed by, kind of swiftly, don’t you think? And here we are again eagerly on the watch-out for the stunning magazine...