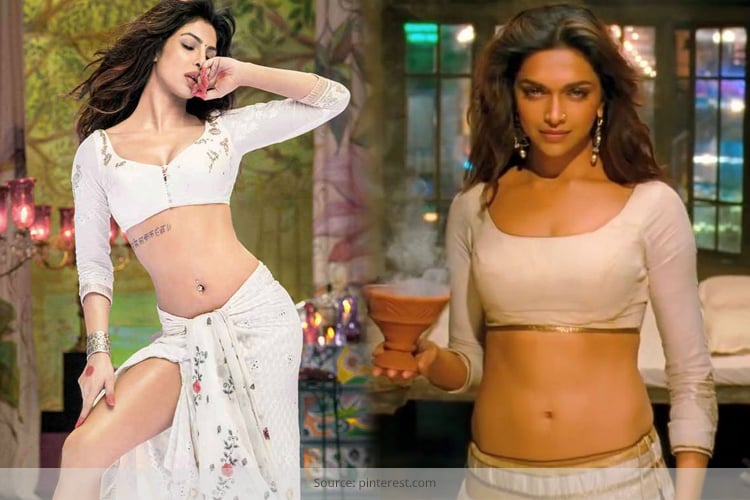 We give you the first looks of Deepika Padukone and Priyanka Chopra from the much-awaited and hyped about movie, Ram Leela.

Starring the ravishing Deepika Padukone and the talented Ranveer Singh, this movie’s story line is based on a love story set in violent times of Gujarat. The film has been primarily shot in Kutch in Gujarat and has got a very rustic feel to it. The film isn’t completely a period drama, but has a modern feel to it.

Deepika sports a radically different look in “Ram Leela” and both director and fashion designer, Anju Modi are all praise for the actress for the poise with which she has carried off her new avatar for this movie.

Sanjay, who has always been known for his flamboyant style when picking costumes for his movies, be it Devdas or Hum Dil De Chuke Sanam, has once again come up with some awe-inspiring looks which are going to create history in Bollywood fashion.

After impressing everyone with her South-Indian image in Chennai Express, she is all set to woo her fans in Gujarati village girl avatar.

Initially, there were talks between between Sanjay Leela and Sabyasachi Mukherjee, the designer who had assisted Sanjay in his movies like Black and Gujzaarish, but things didn’t work out. Anju Modi was finally roped in to style the actress and also Priyanka Chopra, who has done an item number for the movie.

There is no doubt Deepika is looking drop dead gorgeous in the upcoming movie and with all the praises she has been flooded with, the actress has publicly expressed her acknowledgement to her fashion designer, as she believes her costumes helped her get into the character.

“Anju has done a fabulous job considering this is her first feature film…I felt in the character the minute I wore the clothes. I felt like Leela. I think that is the most important aspect when a designer comes on board. It’s so important to allow the actor to feel like the character.”

Deepika has donned a heavily embroidered red lehenga-choli for her peppy garba number Nagada sang dhol baaje in this movie, which is evoking deja-vu. With Navratri around, her garba dance aptly suits the mood and occasion.

Priyanka Chopra on the other hand is equally looks seducing as she does an item number for this movie. PeeCee sports a striking resemblance to Deepika’s look from a song in the same film. However, the lady lash has kept intact the Sanjay Leela essence in her looks, by pairing her sensual white choli and dhoti with ghungroo and mehndi.

And the tattoo on her ribs are the major highlights of her looks. While Aishwarya Rai’s name was initially considered for the dance number, Priyanka was ultimately selected and with releases of both the actresses’ songs have forced people to compare their looks already.

I’m also waiting eagerly waiting for the release date of this much-awaited movie. Well, not only to check-out Deepika’s fashion and PeeCee’s sensual look, but also to enjoy a Sanjay Leela Bhansali’s movie!!

So enjoy watching this movie this Diwali!

Remember These Tips While Getting Your Blouse Stitched

Treatment For Dry Skin Acne: How To Protect Acne-Prone Skin

Top 5 Home Remedies for Chapped Lips That Saves You The...