Stylist Rhea Kapoor needs no introduction, courtesy her muse who is none other than the proclaimed queen of fashion in India, Sonam Kapoor.

Over the years, this sibling duo has almost stirred up a hysteria in the fashion world creating style statements, never seen before in the tinsel town.

Although always in the background, this younger sibling from the famous Kapoor clan, is wholly responsible for the ever escalating graph of Sonam’s fashionable appearances.

Rhea’s styling has always been bold, edgy, experimental and standout. A progressive fashion insider, Rhea foresees upcoming trends and translates them into their best wearable forms. The message Rhea sends out via her muse is that fashion is not for the faint hearts.

Indeed there is a lot to learn about the dynamics of styling from this underdog of glamor world, who talks, walks and breathes fashion.

Stardom comes to those who are not afraid to take chances. Stalking Sonam’s style files we observe, while styling her muse Rhea always resorts to adding one over the top element that is bound to grab eyeballs. To ensure an appearance that looks distinct and fresh Rhea is always on the lookout for elements that are sure to get fashion followers across the nation talking about her look.

For the Chandon event, Rhea dressed up Sonam in a black jumpsuit from Rosario Atelier. While the jumpsuit enveloped Sonam’s curves to perfection it was the dramatic ruffles both at the front and the back that caught all our attention. Coupled with a plunging neckline this one was a statement one. 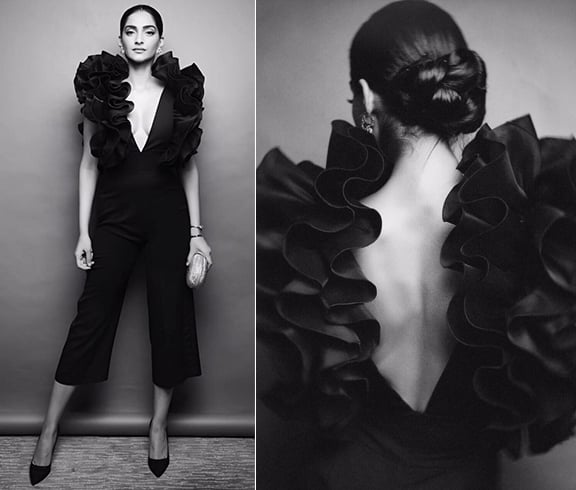 For a photoshoot for Kalyan Jewellers, Rhea Kapoor styled up her muse in summer pastels to complement the gorgeous sets jewellery sets from the brand. We heart Rheas pick from the house of Abu Jani and Sandeep Khosla, that amped up an ordinary saree with a heavy dose of fringes. The fringed blouse added all the contemporary chic to the pastel six yards, taking the look to all new highs. Sonam redefined the fusion ball game wearing it the Masaba way. All credits to Rhea Kapoor, for opting to dress Sonam in this pale blue pants crop top and dupatta ensemble, which got Sonam buzzing for her statement appearance. 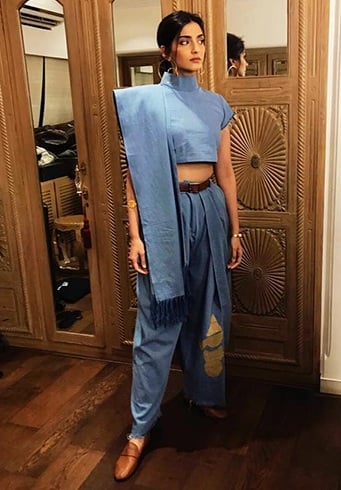 Red carpet calls for heavy drama is a guideline, Rhea seems to have followed all the way. To grab a spotlight amidst all the glamorous spottings is a definite task, and Sonam Kapoor excels in this one. Not one red carpet event is complete without Sonam Kapoor making a statement and posing for the shutterbugs. Rhea always makes space for voluminous gowns for Sonam’s red carpet appearance.

For the Star Screen Awards this year, Sonam revived the monochrome fervour on the red carpet wearing a voluminous black and white ball gown. Rhea kept the look minimalistic styling it up with a pair of solitaires and a neat sleek bun, letting the gown do all the talking. 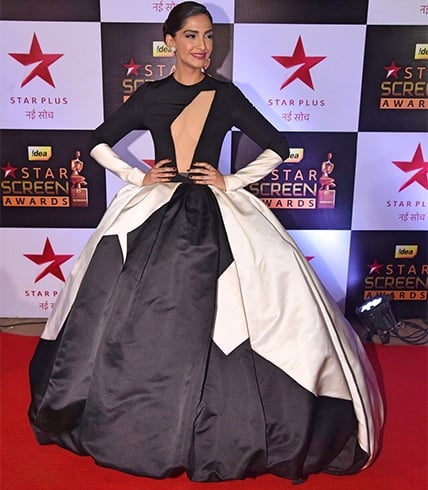 At the Filmfare Awards night, Sonam dressed up like a royalty in an angelic white couture piece from Ellie Saab. The floral appliques added extended charm to Sonam’s regal look. The asymmetric trail amped up the wow factor in this one. 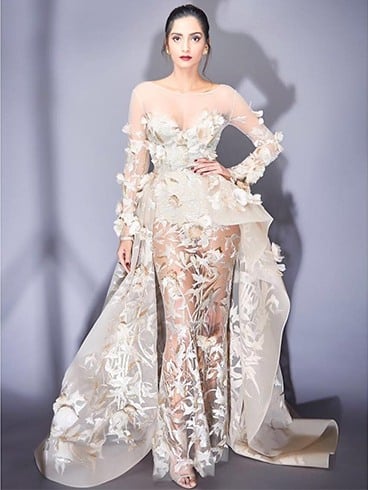 At the Stardust event this year, Sonam sizzled looking like a princess straight out from a Disney movie. The embellished bodice opened up into a voluminous tulle bodice resembling one of the showstopper dresses from a haute couture show. Nominated for her work in Neerja, Sonam won both the award and our hearts. 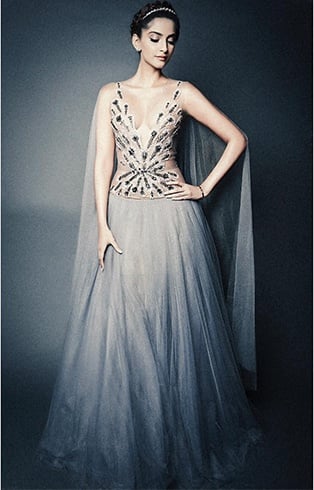 With layerings trending high, Rhea used cover ups as a weapon to style up Sonam’s basic street style and most of her statement airport looks. Last year we saw Sonam revving up her casual style files with oversized layerings. Well we have to admit she got the entire Bollywood tuned into flaunting long layerings. 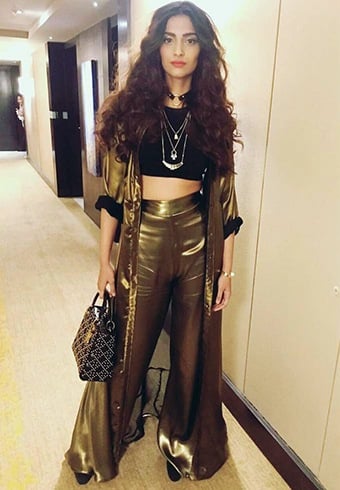 To take Sonam’s simple Payal Pratap white midi dress a notch higher, Rhea surprised us with a long denim layering from Bhane Love. Restoring a bit of Indianness to the look, Rhea completed this one with silver jewellery accents. 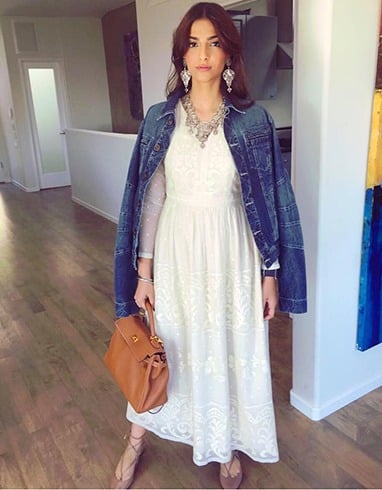 Someone rightly said, give a woman the right shows and she can conquer the world. Footwears and bags are like the weakness of the Kapoor sisters. Rhea often plays up with contrasting footwears to elevate the high end fashion element in Sonam’s appearances.

At the Raees screening earlier this year, Rhea covered Sonam head to toe in Gucci. We were all hearts for the floral midi, that looked so spring summer. But what stole the show was that pair of pastel blue peeps. The cherry on the top, worked like that icing on the cake as far as this appearance was concerned. At an event in the last year, Rhea prepped up Sonam’s solid navy blue look with a contrasting pair of mustard peeps. The blue and mustard pairing looked formal yet super stylish. 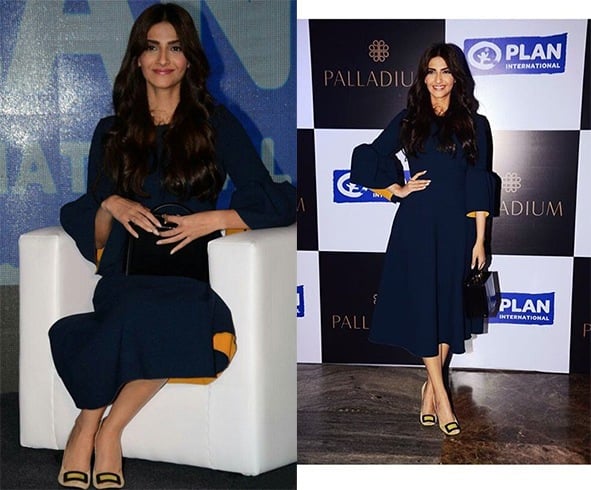 During the Dubai shopping festival, Rhea added a hearty twist to Sonam’s all white diaries. Pairing her white blazer and midi look from Temperley London,  with a pair of marsala knee high boots from Stuart Weitzman. 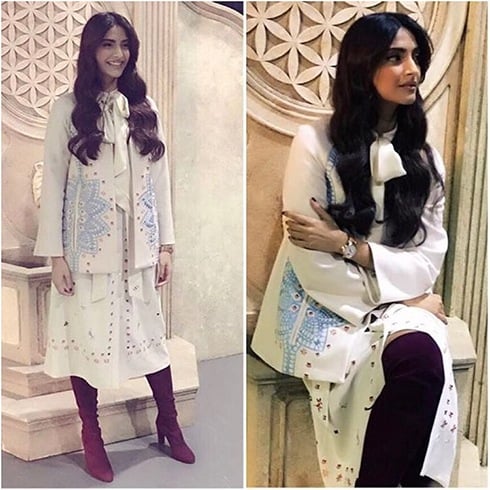 We hope ladies you are not letting our hard work go in vain. So steal all these tips, and dress up the high street way the next time you step out. Remember ladies, the world is your runway.

10 Stylish Umbrellas For Women This Monsoon!

How To Wear A Turtleneck Outfit To Make a Fashion Statement