With most of our favourite celebrity couples breaking up, or taking the route to divorce, this year was indeed a year of break-ups.

But while many went the separate way, there were quite a few couples who took us by surprise, tying a knot this year. Embarking on a new journey of togetherness, a whole lot of beauties from Bollywood and Television, gave us some serious wedding goals.

With love struck candids and fun photos from their wedlocks filling up the Instagram, we almost felt as one of the invitees and cherished every moment from their nuptial rites.

[Also Read: Celebrities Prove That Pastel Hues Are The Next In Thing For Brides]

Before the year ends, let’s look back at all the celebrity brides who stunned us with their bridal glow and gorgeousness.

Bollywood and Tollywood star, Asin married her long time beau, Micromax CEO, Rahul Sharma on the 19th of January this year. Though a private affair, the wedding was indeed a spectacular one, with the two exchanging vows in accordance with both the Christian and Hindu traditions. A beautiful Christian wedding ceremony in the church was preceded by an elaborate Hindu wedding, in the presence of close family and friends.

For her Christian Day Wedding, Asin dressed up angelic in a white Vera Wang number, concealing her face behind a delicate net veil. 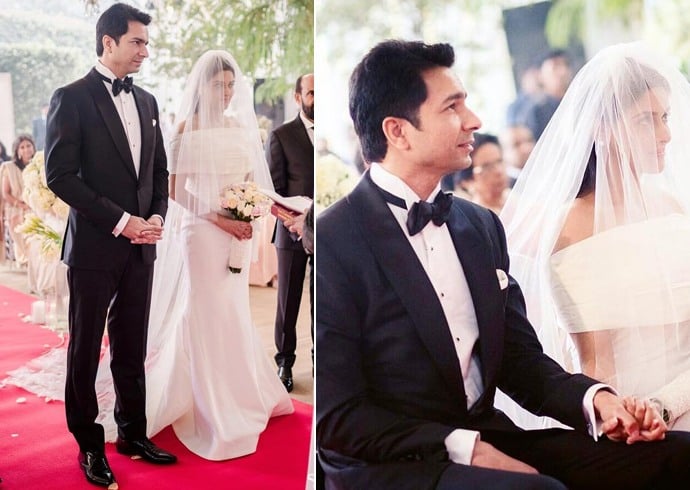 The lady decked up elegant, in a Sabyasachi lehenga with complimenting kundan jewelery, for concluding her Hindu wedding ceremony. She made an absolutely gorgeous bride donning the neutral escapade. The twin weddings were followed by a grand reception in Mumbai on the 23rd of January. With the invitee list boasting of all the big names, Mrs. Rahul Sharma dressed up in an Abu Jani and Sandeep Khosla lehenga and a Rare Heritage necklace from Mehta Emporium. 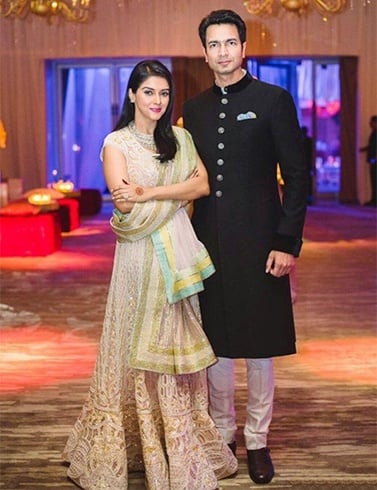 Bipasha Basu finally found her soulmate in Karan Singh Grover. The bong beauty’s marriage to the Punjabi hunk was an elaborate one with the D-Day on the 30th of April. The duo’s wedding observed much limelight, with the two popularising it as the “Monkey Wedding”, on all the social media platforms.

The celebrations kick-started with the Mehndi and Sangeet ceremony on the 29th. The bride-to-be dressed up pretty in a floral staple from Anushree Reddy. The tiara and floral accessories adding more charm to the diva’s mehendi look. On her D-day, Bipasha swayed us being the traditional Bengali bride. In a red Sabyasachi lehenga, Bipasha made for a stunning bride. At her reception, Bipasha exuded positivity and happiness donning an off white floor length ensemble from Sabyasachi again. She added some more sparkle to her bridal glow with baubles from Jaipur Jewels. 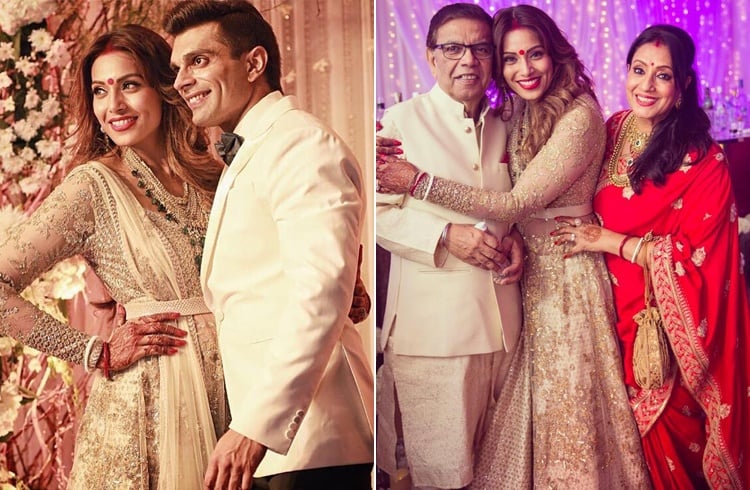 This year cupid struck for our very own Rangeela girl, Urmila Matondkar who went on to marry Kashmiri businessman, Mir Mohsin Akhtar in a close knit ceremony on the 3rd of March. For her D-Day ensemble, Urmila banked on her favorite designer and friend Manish Malhotra. The lady dazzled in a red lehenga from the ace couturier, with green bangles adding that Marathi touch to her bridal look. 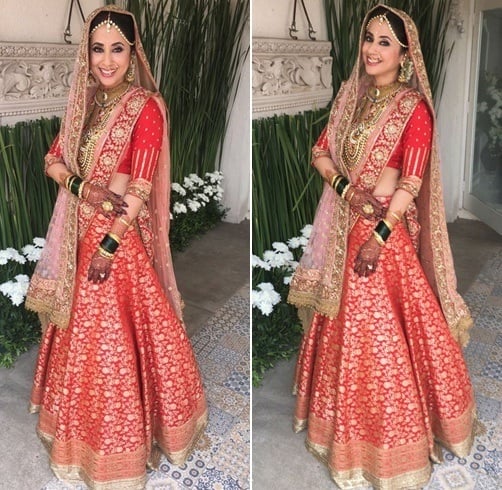 At the reception, Urmila glittered in a golden and white floor length. 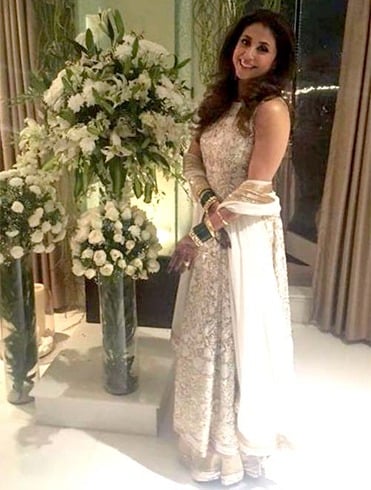 The bubbly and vivacious Preity tied the knot early this year with her long time beau Gene Goodenough in a private affair at Los Angeles on the 29th of Feb.

The cheerful bride took to a bright red lehenga from Manish Malhotra for her wedding ceremony. 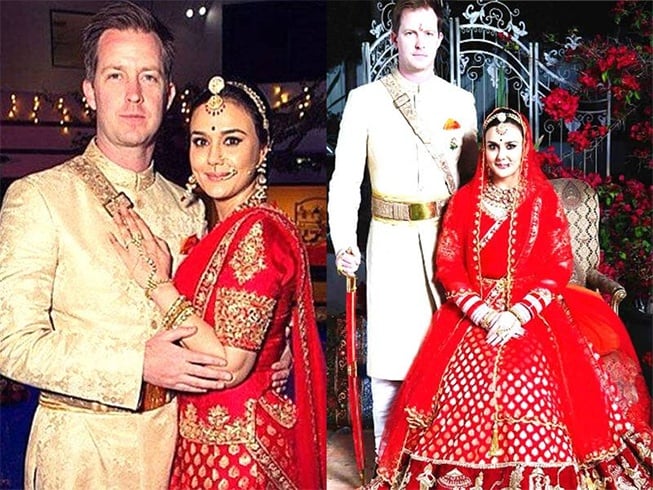 At her star studded reception back in Mumbai, Preity worked a red backless gown from the house of Manish Malhotra again. Styling credits to Tanya Ghavri who dressed up the newly wedded diva, red hot.

[Also Read: Preity Zinta Dazzles In A Red Gown At Her Wedding Reception] 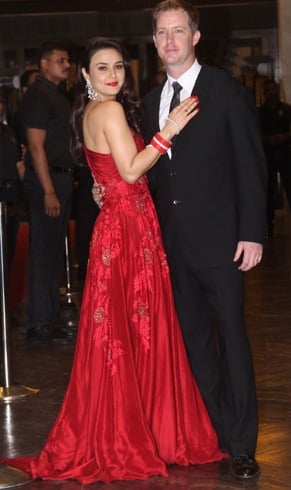 The Ishq Vishq lady with that innocent face finally gave in to her 7-year-old relationship with RJ Anmol, and is now enjoying her marital bliss. Amrita Rao took lifelong vows with husband Anmol in a very hush hush affair on the 15th of May. The affair was private with no photos of the nuptials being shared with the media.

Never mind Amrita, we still love you and wish you a lifetime of togetherness. 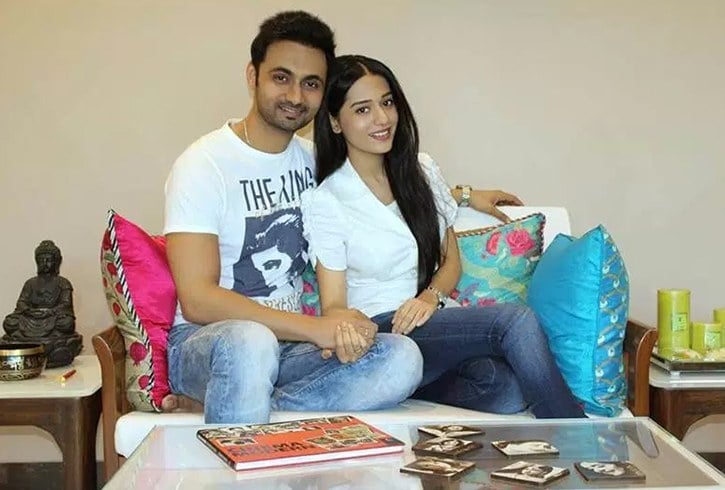 This year saw one of the most eligible cricketers, Yuvraj Singh, settle down with Bollywood actress Hazel Keech. The wedding was a grand affair, spanning across two cities and boasting of attendees from both the cricketing world and Bollywood.

Hazel decked up equally well for all the ceremonies.

For her sangeet night in Chandigarh, Hazel looked splendid and royal in a JJ Valaya floor length. 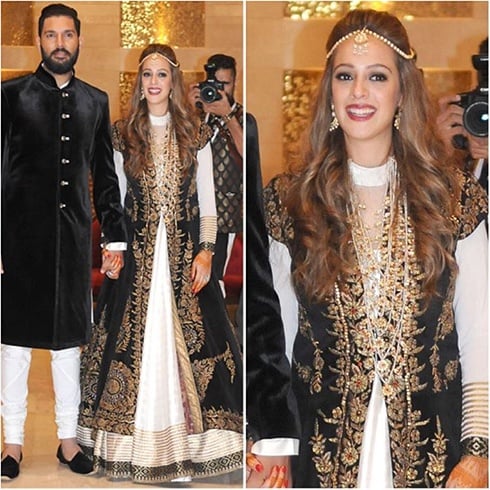 For her gurudwara wedding on the 30th of November, the lady exuded regality in a maroon and red lehenga from JJ Valaya. The Hindu wedding in Goa saw Hazel dress up in a beautiful red lehenga from Ashley Rebello. 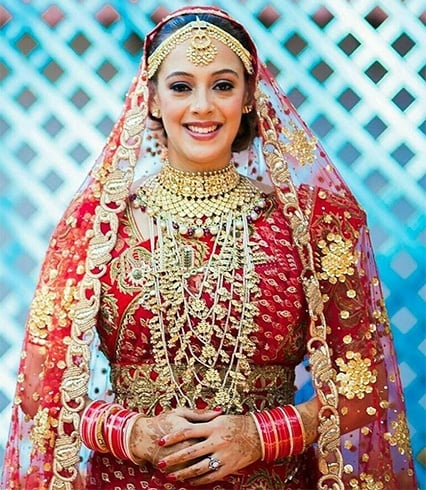 For the finale of her wedding nuptials, the lady looked gorgeous in a white gown. At the reception evening by the sea, Hazel looked surreal. 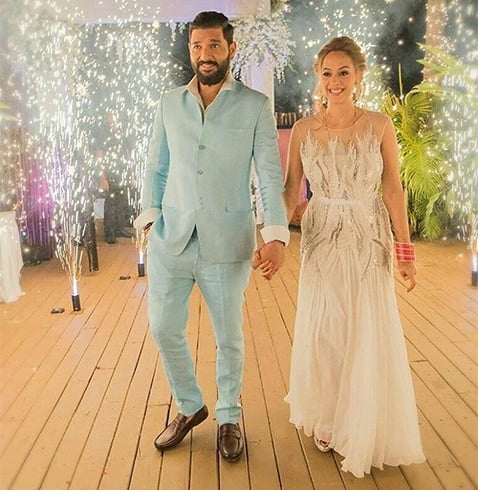 Popular Tv actress Divyanka Tripathi’s wedlock to Vivek Dahiya was one of the most followed weddings of the year, with the couple sharing almost all their sweet little moments with their fans. The lady got all her followers geared up for her D-Day, sharing clips from their dreamy romantic pre-wedding shoot. 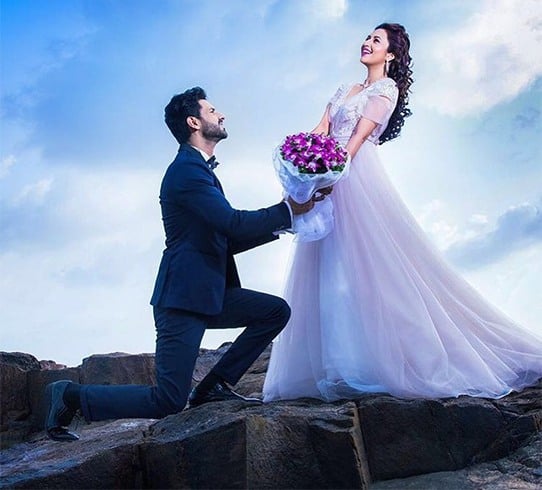 The duo tied the knot on the 8th of July this year in Bhopal, with Divyanka donning a pretty red lehenga. The wedding was followed by two grand receptions. One in Vivek’s hometown, Chandigarh and the other in Mumbai. While for the Chandigarh reception the lady looked charismatic in a maroon lehenga, for her Mumbai reception, Divyanka opted for a voluminous gown in purple. Another popular Tv star, Sanaya Irani tied the knot this year with long time beau and actor Mohit Sehgal on the 25th of January. The most awaited Telly wedding was one big fat destination wedding, in Goa with the who’s who from Television industry in attendance to wish Television’s cutest couple.

The couple had a Christian and a Hindu wedding. While Sanaya looked like an angel in her white gown for her Christian wedding, she radiated in a golden and red lehenga for the traditional Hindu ceremonies. 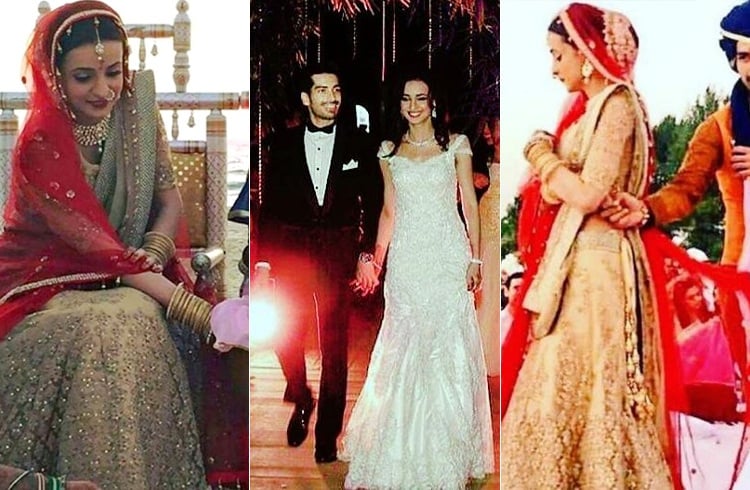 Our heartiest wishes are with all the newly weds this year, and may we see more of our favorites embarking on a lifelong journey of togetherness in the coming year.