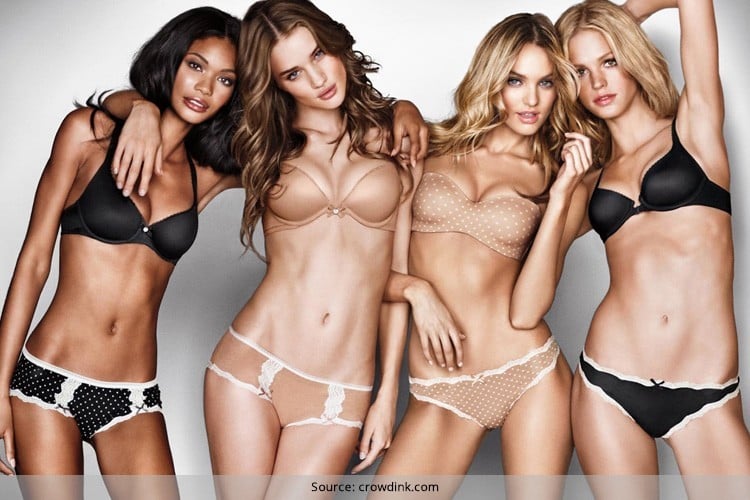 Remember the time when those belonging to conservative families used to wait for the perfect moment just to catch a glimpse of Fashion TV? Since then, we have adopted a lot of western traditions and tastes. The growing popularity of fashion models from all over the world among Indian youth is something that cannot be denied. No one can blame them. After all, who doesn’t get attracted to beautiful models with perfect bodies, posing for cameras with almost nothing on, but a thin piece of cloth.

Behold. We bring to you top 10 lingerie models on this planet, who look best when they are underdressed.

The supermodel to top our list is Adriana! She is a one of a kind model, who entered the scene in the 90’s and has remained unsurpassed since. Age is not a factor for this stunning Brazilian, as even Victoria’s Secret have not discontinued her contract, making her their longest running “Angel” since 2000. Further, she was also a spokesmodel for Maybelline from 2003 to 2009 and has consistently been one of the top 3 paid models, with earnings reaching an average of 7 million each year.

Alessandra was born in Brazil and took baby steps in this industry even before she was 15. She has been linked with Victoria’s Secret for all her professional life and even was selected as the first spokesperson for their “PINK” line. She even launched her own swimwear in 2004, which proved to be a huge success.

This south-African hottie was first spotted by a scout in a Durban flea market at a minor age of 15. Since then she has been on the cover of Vogue, Elle, GQ and even Harper’s Bazaar, and has also walked the ramp for designers like Tommy Hilfiger and Michael Kors. She has been involved with Victoria’s Secret since 2007, was officially named an “Angel” in 2010 and got the privilege of wearing their costliest Fantasy Bra yet ($10 million).

An Israeli by birth, Rafaeli, according to Forbes, was the highest paid Israeli model in 2013. Other than modelling, she is also a host and an actress, much like the other models on this list. She has been a cover model for the Sports Illustrated Swimsuit Issue, and has also been voted #1 by Maxim, on their Hot 100 list (2012).

One of the reasons why she’s on this list is because she’s been a cover girl for Playboy. If that is not enough, she has also been on the covers for eminent magazines like Vogue, Harper’s Bazaar and even Cosmopolitan. This Italian model also made an appearance in the Victoria’s Secret Fashion Show in 2005.

This American beauty is known not just for her modelling career, but also on the basis of her work in Hollywood movies like “Tower Heist” and “The Other Woman”. She shot to fame when she posed for the cover of the prestigious Sports Illustrated Swimsuit Issue for the 2012 and 2013 issues, after bagging the “Rookie of the Year” title just a couple of years ago.

Erin, born and brought up in America, was discovered by a scout in Miami while vacationing, following which she moved to New York to kick-start her modelling career. She has walked for renowned brands like Prada, Tommy Hilfiger and Marc Jacobs. She is a featured supermodel for Victoria’s Secret, and was ranked #15 on the top 25 sexiest models list, as of 2013.

This Dutch lingerie model is also an “Angel” for Victoria’s Secret. Her path to modelling was not a normal one, as she had never considered modelling professionally, but a few casual photographs sent to a modelling agency got her into this starry limelight. She has also been on the covers of Time and Elle, with Vogue even labelling her the “Model of the Year” (Reader’s Choice).

Irina Shayk was born in Russia to a coal miner and a music teacher. She got her major break when she was made the face of Intimissimi lingerie in 2007, which was also the year when she first made a presence in the high-status Sports Illustrated Swimsuit Issue. Till then, she has appeared in all their annual issues yet, and has even become the brand ambassador for Intimissimi.

Miranda is very well known lingerie model owing to her Victoria’s Secret status and her marriage to Orlando Bloom (now separated). Beginning her modelling career when she was a mere teenager, this innocent looking model shot to fame after her immense success with Maybelline, following which she was taken up by Victoria’s Secret in 2007, making her the first Australian to join the lingerie giant.

We have listed famous lingerie models that we found should be in the list of top 10 lingerie models, if you think there are other names which needs to be included. Do not shy away, please share your suggestions.

How to Look Thinner and Sexy in Indian Wear

Craftsvilla Is Your Perfect Guide To Rock The Festive Season With...

5 Home Remedies For Blackheads And Acne