It’s showtime again! Yes, after Deepika Padukone and Ranveer Singh’s beyond imagination wedding, it is now Priyanka Chopra and Nick Jonas’ time to steal the thunder. With the wedding date set for December 2nd 2018, the wedding festivities are in great swing and we assure you that every detail will open your eyes wide and in awe. It is reported that the wedding would be a four-day affair with the Mehendi and Sangeet ceremonies on November 29. A cocktail party then follows it on 30 November, Haldi on December 1st. Coming to the big day, i.e. December 2, there will be two ceremonies, one a Christian wedding and another one following the Hindu customs and traditions. It is also reported that the couple will be hosting two receptions, one in Delhi and another in Mumbai.

When it came to venue, the diva went desi unlike Anushka Sharma and Deepika Padukone. The couple, PC and Nick Jonas, will be performing their wedding rituals at the Umaid Bhawan Palace in Jodhpur, one of the world’s largest private residences. It belongs to the royal family of Jodhpur and a part of it is managed by Taj Hotels. 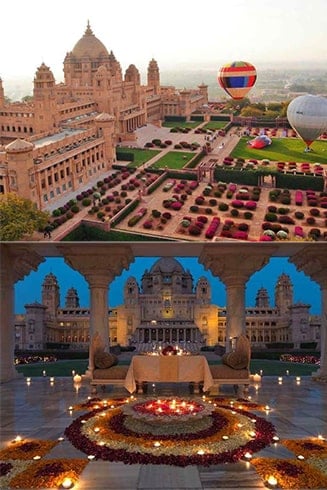 Weddings especially in a royal venue invites royal outfits and styles, don’t you agree? It is rumored that the diva would be dressing up for the Hindu ritual in the traditional red lehenga designed by the designer duo, Abu Jani and Sandeep Khosla. However, her Christian wedding gown choice is unsure and the guesses are circling around Ralph Lauren, Vera Wang, Naeem Khan and Marchesa. Whichever she picks, we are sure tehd iva will look stunning and drop-dead gorgeous.

To begin with, the shaadi ke ladoos were replaced by macaroons from Paris by the bride while sending out her wedding invitations. The bride-to-be created a wedding registry of gifts with amazon. Her wishlist includes utensils, travel bags, household items, fitness quipments and anything for her sweet dog Diana.

Lastly, it has come to our notice that the couple would be giving out silver coins with lord Ganesha and Goddess Lakshmi on one side and their initials on the other to all their guests. Can’t wait for the big fat wedding! Stay tuned as we will keep bringing to you every update of the grandeur celebrations.

Make Them Look Full And Luscious- Here’s How To Contour Lips...

10 Best Spa Products To Get Healthy And Lustrous Hair

Vidya Balan Fashion Profile Is An Epitome Of Ethnic Fashion

Diesel Launches “Denim Master Studio’ And Takes Us Along A Jolly...

Fashionlady - June 2, 2016 0
Trends change like the swift of an air, and before we even realize, we are out of fashion. With the world competing so wildly...