Rani Mukerji won us all right when she made her debut as Tina in Kuch Kuch Hota Hai, didn’t she? Be it the Punjabi bubbly girl from Bunty Aur Babli, or the Michelle in Black, or her strong authority role in Mardaani, she proved to be a versatile as well as an outstanding actor. After a sabbatical, the diva is back with a bang and so is her fashion game. 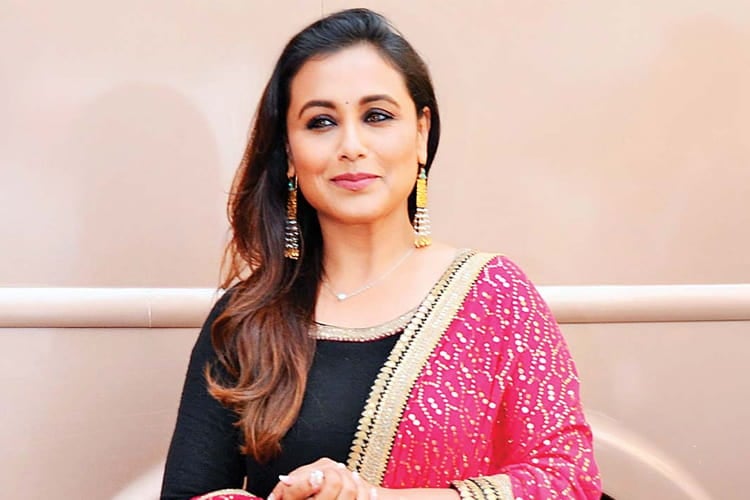 Read along for Rani’s best fashion moments, her tips and tricks on fitness, beauty and a sneak peek into her personal details.

However, when film opportunities lined up, the diva chose to pursue it on her mother’s insistence on an experimental basis which surely clicked in her favor. Before she began her work as an actor, she trained at Roshan Taneja’s Acting Institute. 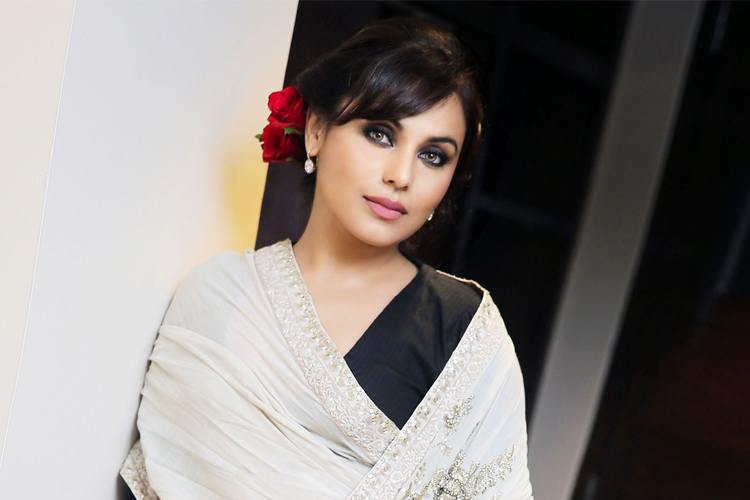 It is quite natural that we crave to know the personal details of our favorite celeb just to feel connected, don’t you agree? Hence, we have here the personal biography of the dashing and dynamics diva, Mukherjeei, which makes us believe that she is as simple as the girl-next-door. Rani Mukerji is a celebrated actress and is well known as the Khandala girl. Besides aweing us with her professionalism and skills on the big screens, the lovely lady is also actively involved with several humanitarian causes and has been lending her undying support to issues faced by women and children.

Procter & Gamble and NGO Child Rights and You chose her as their brand ambassador. She also set up a Stroke Treatment Fund along with Indian Stroke Association to pay for the medical needs of financially weak patients.

She is the diva who set in motion a new fashion chapter with her role as Tina in Kuch Kuch Hota Hai. And from then, till now, the diva never ceased to amaze us with her glamour filled styles and fashion choices.

Once you step up to parenting, the fashion game changes altogether. From bold, dashing styles, women tend to move onto to classy, sophisticated and matured fashion picks. Rani Mukerji was also seen making noticeable changes to her closet yet keeping it both attractive and youthful.

Scroll down for more on her fashion evolution and bold choices-

Rani Mukherjee reunited with her Kuch Kuch Hota Hai team for the 20th anniversary celebrations and one look at her brought back the memory of the lovely, sensuous Tina. She rocked a classy Alexander McQueen pantsuit for the event. The lace anti-fit sleeves added a peppy vibe to her upbeat style. Looks like the diva goes with the trend. Her red hot lip color was a bold move and she faired it well. 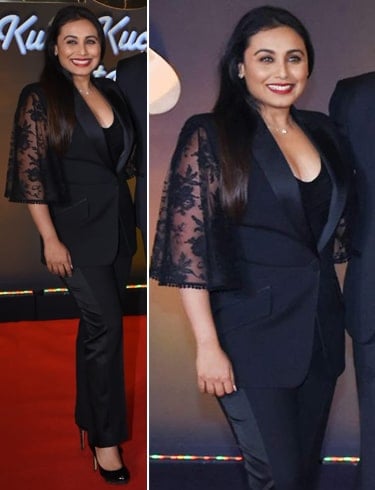 While the pantsuit made us believe that the diva moved away from girly, sweet, adorable styles, the former style proved us wrong. Floral cut-out shoulder Phillipp Plein dress was her take and she carried it smooth and easy. She doesn’t mind playing with her accessories and her choice of Fendi monster slipons was a proof of it. 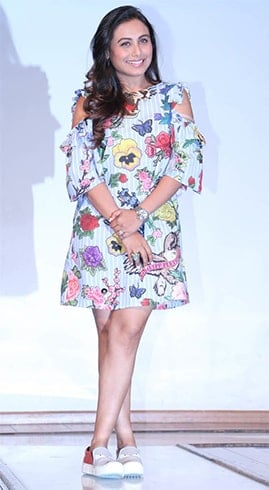 It isn’t easy to pull off stripes fashion without lot of criticism. But surprisingly Rani took up the challenge and aced it. For her movie Hichki’s promotions, she managed to pull off a stripes Gucci pants with utmost ease. By playing it with cream solid-toned blouse and red hot pumps, and a red bead necklace, she spiced it up right, don’t you agree? 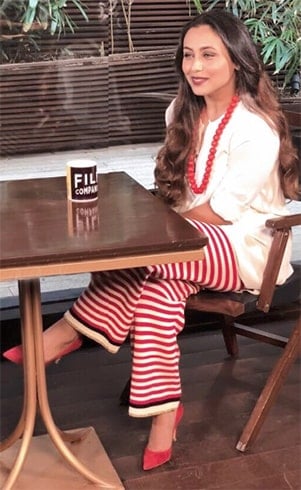 Rani Mukherjee has a unique taste for her shoes. Sometimes, it is a solid-colored dress with knee high boots, and another time it’s a high-alert color with cool street sneakers. Which one’s your fave? 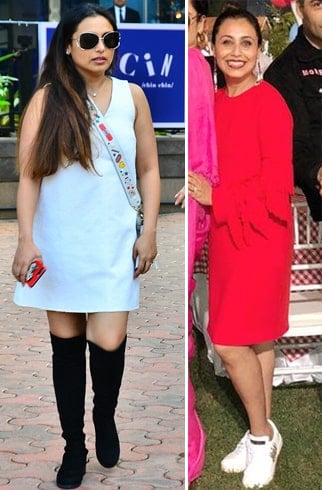 No one, we repeat, no one can separate Rani from her denim. Be it while on travel or just a casual outing, the diva stayed loyal with her denim style and we absolutely loved it till date.

She was seen at the airport in Stella McCartney tee, stone washed denims, a quirky Prada handbag and uber cool Kolhapuri sandals. 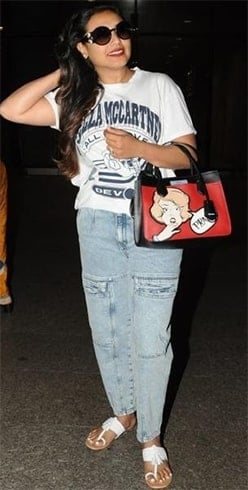 For one of her movie promotions, she rocked a denim-on-denim style in Phillipp Plein label. she was seen attending one of the events, in a Diesel top, gray jeans and Diesel boots. Her choice of bold lip color, her signature wavy hairdo were highly intoxicating. 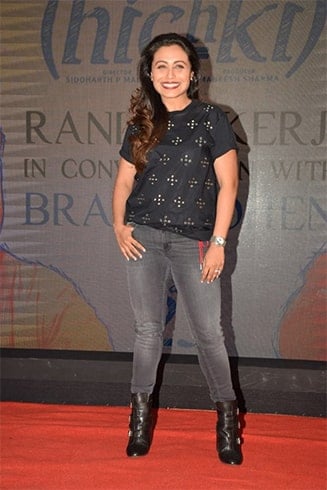 For a longtime from 2011 to 2015, Sabyasachi has been Rani’s favorite. She recently took to her favorite designer at two different occasions and dressed up drop-dead gorgeous.

She attended the Indian Festival of Melbourne 2018 in a floral Sabyasachi sari. Giving out strongly feminine vibes with her indo-western 9 yards style, she was simple stunning. With pearls and red-hot lips, she showed to us that in simplicity and minimalism lies true beauty. Being a Bengali, the diva, celebrates with great enthusiasm both Dussera and Diwali. And her festive styles are vibrant and a visual treat. For the festival celebrations, she stayed close to royal puja colors like gold, cream, red and bright pinks. Check it out- 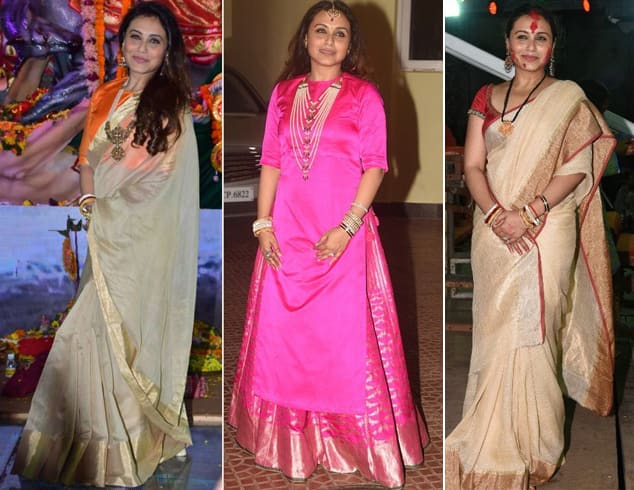 After becoming the mother of a heavy Adira, Rani had to struggle hard to lose the pregnancy weight. Her fitness regime was strong and impactful which we believe she still continues on a day-to-day basis.

She starts with stretching for 30 minutes, followed by 30 minutes cardio with cross-trainer. After the warm up session, she involves herself in another 45 minutes cardio every day. She also chooses to walk around the bungalow and take the stairs frequently to lose few extra pounds.

Besides all the mechanical workout and cardio, she cultivated a habit of practicing yoga 3 times a week to relax her mind and body. She is also seen at the gym twice a week performing some weight training exercises. It is no big secret that exercise, and diet go hand-in-hand for weight loss. Rani always stuck to a strict diet regime and made sure she diverted her cravings into healthy picks. She makes sure she eats every 4 hours in moderate portions and definitely finishes her dinner by 8 PM. 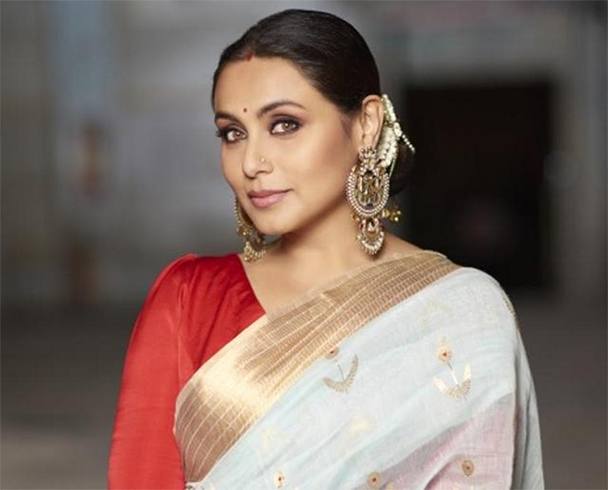 Her eyes hold a bewitching sparkle and her tresses are truly luscious. Just like you all, we kept wondering what the diva does to keep the magic of her beauty intact. Here are a few insights we stumbled upon-

For her eyes, she loves to use rose water as a toner. She treats her tired eyes often to this toner, which not just cools them but also leaves them refreshed and well rested.

Since Rani Mukherjee is an ardent fan of Mac products, we expected no less than a mix and match of Mac tools and products. She starts her makeup with Mac Studio Fix Liquid Foundation SPF 15 and ends it with Mac Select Sheer Powder for the desired matte finish.

Her lip color choices are usually pink and neutral brown. She is often seen using Mac Viva Glam V and Twig for lips which works like a charm for the diva. Her smokey eyes that strongly rely on dark colors pops out the beauty of her eyes fierce and stunning. 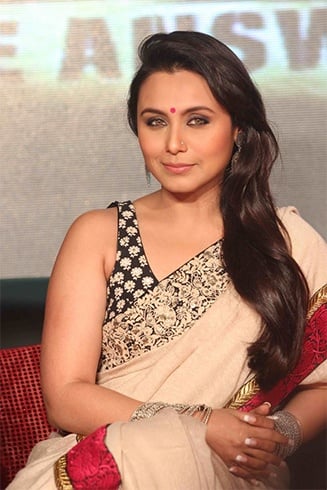 Rani Mukerji’s style file is one of its kind, don’t you agree? Comfortable dressing is her motto and we have no reason to deny that she stayed close to her belief and comfort. With sheer grace and delicacy, she carried herself flawlessly be it casual outfits or desi ensembles. What do you think? Feel free to share your thoughts!

You Won’t Believe What These Celebrities Wore Over The Week!

6 Summer Sandals that are in Trends Now