Indian Fashion Blog
Home Celebrity Denim Or Pantsuit Styles? Which Style Of Rani Do You Have Hots... 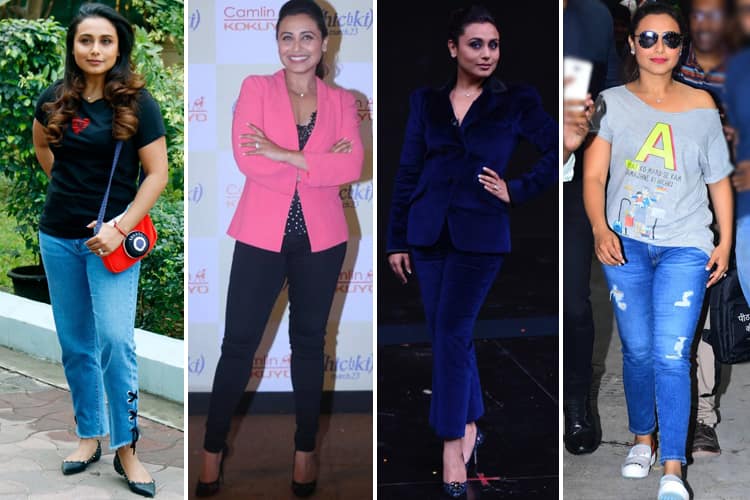 We are greatly excited to see Rani Mukerji hit the silver screens after a long break with her upcoming film, Hichki. One look at the trailer for the film and we have to admit that we are impressed of Rani for taking up the new theme and risking a new concept of the film.

As excited as we are with her upcoming film, equally engrossed were we with her fashion avatars during the promotional activities. Let us decode her Simple styles to our benefit:

Absolutely chic and hippie was Rani Mukherji at two of the promotional events.

For one of the events, she did a black tee over blue denim style. Adding Anne Claire accessories and Maison Valentino, Rani marveled us with her simplicity Love the quirky handbag!

Her beauty game was intact with neutral makeup and stiff curls rolling down her shoulders.Simple yet stunning was the diva showcasing an absolutely casual style.

For another promotional event, she went sassy and sexy in a slipping shoulder graphic top over a pair of denim. White Fendi shoes, jeweled shades and rocking red lips, defined her style well.

While the former styles were casual and chic, the latter promotional styles were bossy and beautiful. For one of the promotional event, she dolled up royally in a midnight blue velvet pantsuit by Altuzzara. Adding Dolce & Gabbana shoes, she finished out the style grandly. Love the dash of blue on her eyelids! Although we wished that the diva left her hair nice, soft and smooth rolling down her shoulders, but we have no issues with sleek hair bun that she opted for!

For another promotional event, Rani Mukerji opted for a pantsuit style. Wearing a black lace cami with black denim and a pink blazer, she rolled out a trendy chic look. Black pumps, sleek ponytail, and near neutral makeup rounded her stunning piece of fashion art. Love the pop of pink on her all-black style.

Indian Winter Fashion at its Best