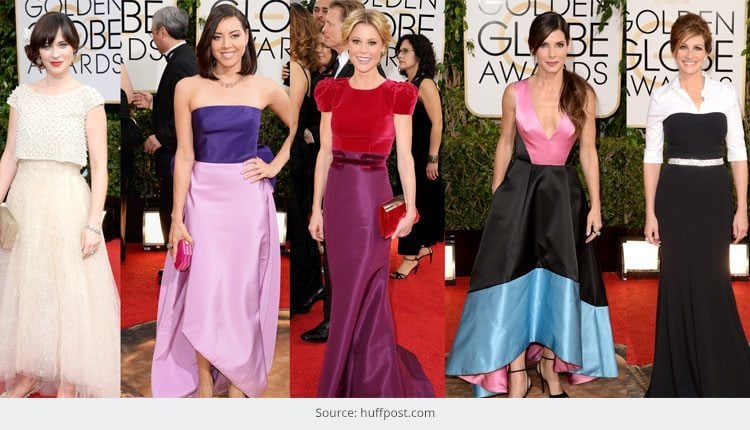 Sometimes despite spending hundreds and thousands of dollars or rupees on their stylists, celebs still goof up. Sometimes ugly clothes happen to beautiful people and this is where we Fashion Police blow our whistles.

Let’s check out some of the train wrecks of this season. Let’s start with our Bollywood beauties.

1. When Kajol just picked up some curtains

Kajol, from our yesteryears always manages to look pretty. But somehow her outfit at a latest event scared her. It looked like two pieces of curtains sewn together. We get it, teal is in fashion, but having it in such a scruffy form will never get you anywhere!

Can there be something as too much golden? Yes, it can be and Aishwarya Rai Bachchan just proved it with her gaudy ensemble for Cannes. The saree she wore was too golden and on top of it, she had a very unflattering top knot. All in all it was a bad golden disaster.

Well, that did not go well as planned. After her wedding, Rani Mukherjee piled on a few kilos, but she definitely did a terrible job in camouflaging them. Take a look at her weird ensemble and see for yourself!

Gone are the days of lace and even worse is when you decide to dress up in a lace gown! This would be a real fashion disaster. This is what Mallika Sherawat did when she went to attend an AIDS charity function. Unfortunately, the all-white gown was the actual eyesore.

Unfortunately for this time, Priyanka Chopra’s outfit was a sheer disaster. The colour, the fabric and the cut, everything spelt ugly in capital letters. We were quite disappointed in the usually impeccable lady’s questionable fashion choice.

Back in the 2000s, Britney Spears and her then boyfriend Justin Timberlake rocked their all denim looks. But when in 2014 Katy Perry decided to do the same, it did not look good at all. Sadly, her crazy dress choice was voted as one of the worst in the 2014 VMAs.

The ‘No Doubt’ singer and a mother of three has good choice of outfits, but the one day she decided to be in an interview with Seth Meyers, she decided to don a horrible looking snake-skin pantsuit. The ensemble was terrible on so many levels and the silver sheen actually made it worse!

Yes, all black can be such a flattering look, but sometimes it does not work for you. The same happened to Cindy Crawford and she ended up looking very drab and unflattering.

So, don’t be hard on yourself if you make a fashion mistake. See! Even celebs can be quite a disaster!

Tips On Wearing Make-up To Workplace

Top Ten Easy Ways to Make Sure Your Baby Bump Does...

Ideas On How To Do Chrome Nail Art Explained In...