It has been 20 years that the blockbuster Kuch Kuch Hota Hai was released and it still has a reverberating impact on its audience. The ‘kuch kuch hota hai Rahul, tum nahi samjhoge’ dialogue still gives us the goosebumps and of course absolutely love the songs that most of us hummed for ages. Karan Johar who made a debut as a director with the film, KKHH, decided to celebrate the 20 years of the film and threw an extravagant party calling in his dearest friends and starcast of the film. While Shah Rukh Khan, kajol and Rani Mukerji recreated the poster picture, Ishaan Khatter and Janhvi Kapoor recreated the magical Rahul-Anjali moments. 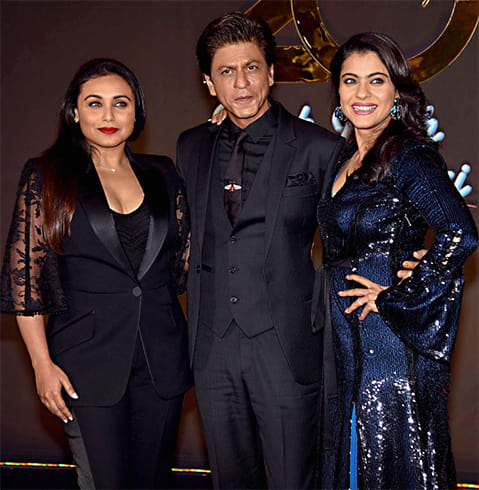 Here are the fashion highlights of the party-

The star of the celebrations, and the film Kuch Kuch Hota Hai, Kajol turned up like a shimmering star at the event in a metallic midnight blue dress by Prabal Gurung. Jimmy Choo sandals, sparkling earrings and wavy hairdo sweetened the scintillating style of the diva. Sangeeta Kumar hedge, the hairstylist did an excellent job with her wavy tresses. Mickey Contractor played it easy and refreshing with her makeup. 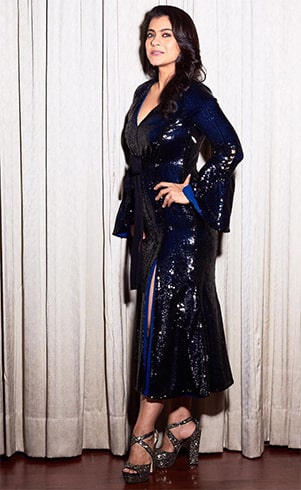 The ‘Tina’ of Kuch Kuch Hota Hai, the one who gave new vibe to college styles in the film, Rani Mukerji was spotted at the event looking chic and upbeat in an Alexander McQueen pantsuit. With red-hot lips, soft straight hair and beautifully contoured makeup, she was a hit at the party.

The ‘Anjali’ of Kuch Kuch Hota Hai, Sana Saeed, rocked the party with her chic appearance. She melted the crowd’s hearts with her sexy all black style. With straight hair and blush toned makeup and lips, she was glamour overloaded. 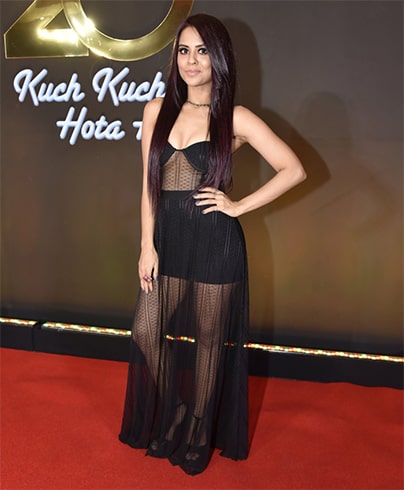 Kareena Kapoor, the showstopper at every party looked fab like always at the 20 years celebrations of Kuch Kuch Hota Hai. She picked a plunging neckline Balmain dress for the event and tapped in elegance with dazzling earrings from Karishma Joolry, Brian Atwood shoes, rings from The Bohemian. Stiff wavy hair, winged liner, smokey eyes, and bronze touchups finished her style. 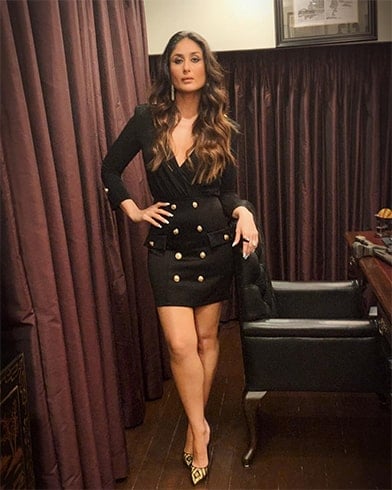 The novelist and dear friend of Karan Johar, Twinkle Khanna, who initially turned down the offer of Rani Mukerji’s role in Kuch Kuch Hota Hai, attended the bash looking chic. In a peacock feather printed blazer and skirt over a black top by Dries Van Noten, she set a new trend in motion. Teal colored sandals, metallic clutch and wavy hairdo suited her style well. 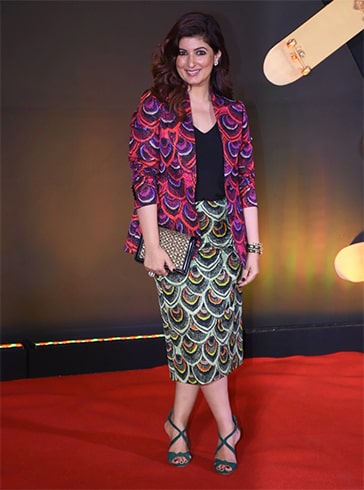 It was neons for Janhvi Kapoor at the 20 years celebrations of KKH thrown by Karan Johar. Flaunting her sassy legs in a slit maxi dress by Shehlaa khan, she swept us off our feet. Amrapali jewels, nude ankle strap heels, glossy red lips and straight hairdo looked splendid on her and surely, we have to admit the neon brightened up the party. 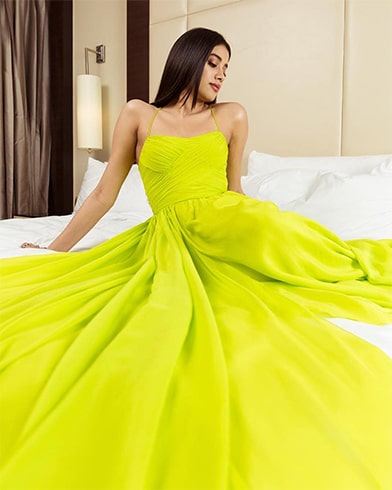 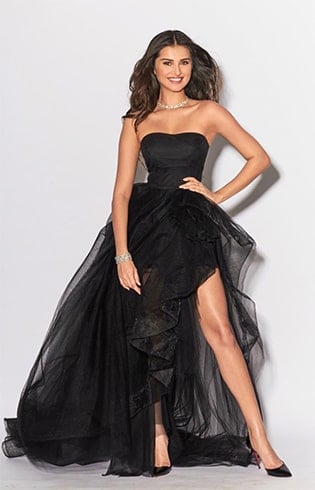 Another fresh face of Dharma Productions, and Chunky Pandey’s daughter, Ananya Pandey was captured by the paparazzi at the Karan Johar bash. In a shimmering Monisha Jaising mini wrap dress, she looked like a fashion feast. And oh my! Those lovely butterfly Sophie Webster metallic sandals were the killer feature of her avatar. Stiff greasy wavy hair, glowing makeup and glossy lips closed her style. 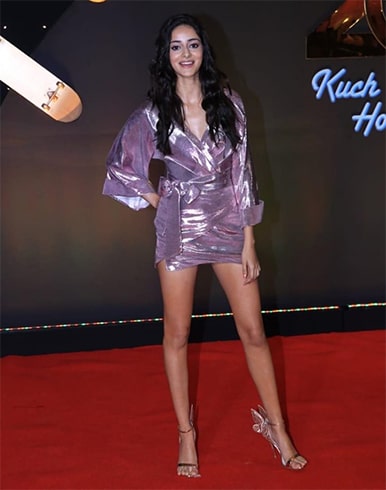 Looks like the other name for simplicity is Alia Bhatt. The diva has always been spotted in casual to classy outfits with bare minimum accessories and glitter. Her style at 20 years of KKHH speaks for what we are trying to convey. In a thigh-high slit anti fit maxi dress by Silvia Tcherassi, she caught every onlooker’s eyes and heart. While Priyanka Borkar worked wonders on her tresses giving them a wavy touch, Puneet B Saini spilled magic with her airbrush and gave her neutral toned makeup. Adding Kaj Fine Jewelry, she closed her style setting a remarkably simple trend in swing. 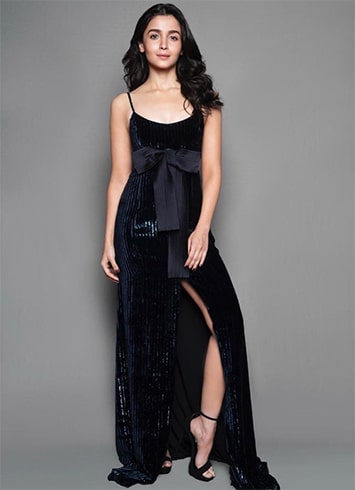 In a khaki green maxi dress by Stephany D’Souza, Neha Dhupia posed for the glam cam at the 20 years celebrations of Kuch Kuch Hota hai. She layered the maxi dress with a contrast deep blue Marks & Spencers blazer and added a striking vibe to her subtle style. Tan colored clutch, layered neckpieces, wavy hairdo and pink toned touch ups, were her choices for the event in play. 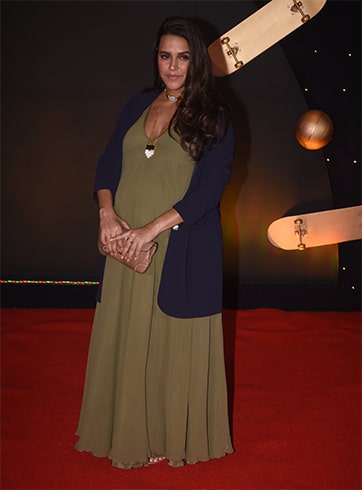 The Indian philanthropist, Natasha Poonawalla, the billionaire who is making tons of appearances with the who’s who of B-town was also spotted at the 20 years celebration KKHH. In a black and white mini dress, with trendy earrings, a blush toned clutch and wavy hairdo, she was an epitome of elegance and a true blend of class with sass. 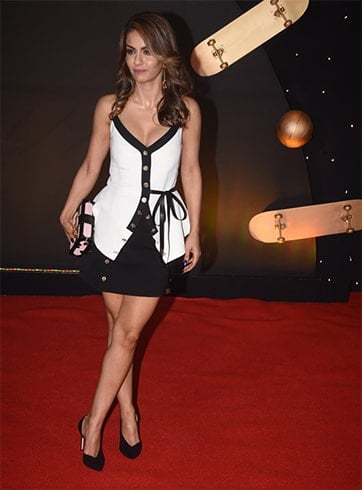 After watching the celebs having a gala time reminiscing the times of Kuch Kuch Hota Hai, we are tempted to pick a tub of icecream or popcorn and immerse ourselves in the beauty of the film! What about you?

Team FashionLady Is Collaborating With IIT Roorkee, And It’s Going To...

This Year’s ‘Vogue’ By Mood Indigo Is Going To Be Brilliant!!

Fashionlady - December 16, 2015 0
18th December is right around the corner and we cannot wait for it to come sooner. Back in September, we had promised you that...