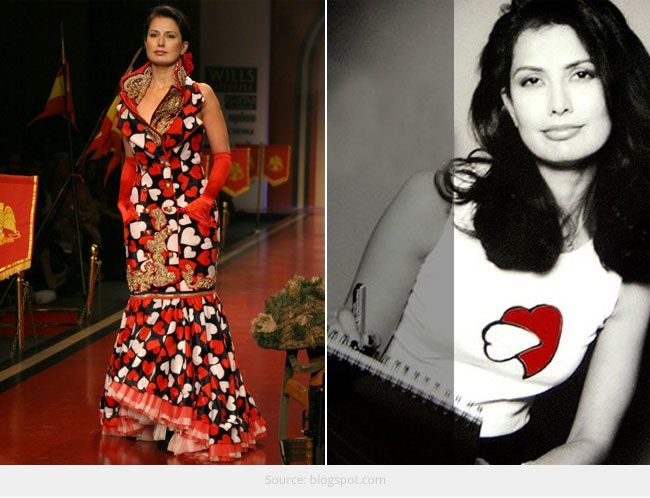 Ritu Beri, also known as “Donatella Versace of India” or “The First Lady of Fashion”, doesn’t need any kind of introduction! Ritu Beri is a Delhi based couturier. She is in the board of governors of NIFT (National Institute of Fashion Technology) and also runs the Savera Charity Association for the upliftment of women. Her designs have been worn by celebrities like former US president Bill Clinton, Prince Charles, Hollywood stars like Nicole Kidman and Andie McDowell, Bollywood stars like Madhuri Dixit and Preity Zinta among others.

As the fashion queen Ritu Beri completes her 25 years in the fashion industry, we recounts 25 Golden moments of her life as a couturier

2. She did her graduation in Economics Honors, from Lady Shri Ram College in 1987

3. Ritu Beri was amongst the first batch of NIFT, which had 25 students

4. Presenting her first designer collection “Lavanya”, just after her education at NIFT, saw major appreciation by the people

6. In 1998, she became the first Indian to have presented her first collection in Paris. It was named “la semaine de la haute couture”

7. She was also invited by Swarovski to present her “summer/spring 2000 collection” at Vienna

8. Ritu came up with her own personal fashion book “101 ways to look good”

9. Beri has authored the most expensive Indian Book named “Firefly-A Fairytale”, costing Rs 1 lakh and published by the designer herself

10. Ritu Beri designs for the most expensive doll, The Barbie!

11. She became the only Indian designer to be featured in the promostyl’s magazine, Acustyl, which predicts future trends worldwide

13. She is the first Indian fashion designer to head a French label, “The Jean Louis Scherrer.”

14. Ritu Beri worked under the French designer Francois Lesage to learn embroidery and calls it a great experience and is highly grateful for it

15. She has also been a consultant for London Harrods store and various international brands like Volvo, Swarovski and Honda Motors

17. She received the Rashtriya Shiromani Award in 2000

19. She was honored the Kalpana Chawla Excellence Award in 2007 for excelling in her area of expertise

20. In 2007, Ritu became the mother of a beautiful daughter. She named her Gia and was very ecstatic

21. Ritu Beri was conferred with the Chevalier dans l’Ordre des Arts et des Lettres (Knight of the Order of Arts and Letters), a prestigious French award for her sheer dedication and contribution to the fashion industry.

22. She got featured in the TIME magazine as one of the people to watch out for in international business

23. She is an honorary patron of the Savera Association, a charity which involves in improving the lives of women. She believes in working for women and is therefore working for the upliftment of women through her charity association

25. Ritu Beri has also started the kids’ clothing line by the name of Baby Beri

The list of awards will surely incline in the coming years in Ritu Beri’s life! We will also get to see her more vibrant and stylish collections. We wish to see this fashion lady soar high in the sky of success!

Travel Vogue of B-Town Gets Interesting With Every Week

Get Ready To Be Inspired By Our List Of 10 Bajuband...