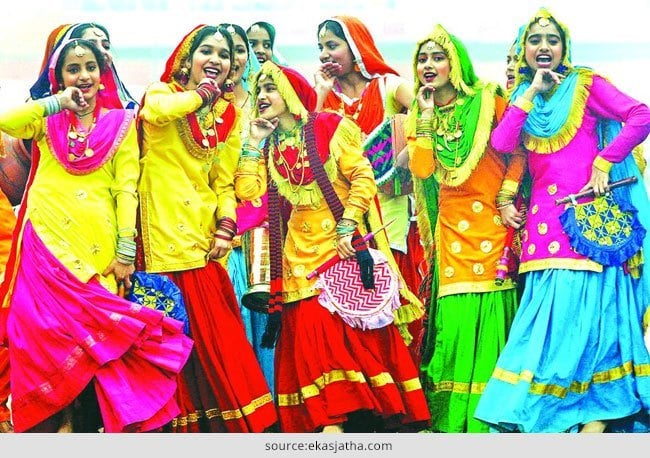 They have their own dastaar, their own cool style and chic creativity unleashed when it comes to making waves. Punjabi women know how to dress. With total honesty we declare, the fun-loving community that loves their chicken tikkas and Patiala pegs, the hardworking and honest bunch of people ever found around; the most trustworthy folks to do business with, and yes, they love their dance, events, music, weddings and occasions to be the ‘talk of the town’ too.

Talk about equality, empowerment, self-expression, religious sentiments and the uber-authenticity of the Punjabi lifestyle, you’d for sure be floored. Hope you enjoy the five best style statements made by the Punjabi women folks out there; so inspiring and energetic we tell you, get enlightened now!

Seriously, the makers of many Bollywood movies should in honour credit the Punjabis for the Punjabi paranda hairstyles. A traditional hair accessory that Punjabi women carry off with great ease. From ‘Jab We Met’ to many other movies where women decorate their braids with the paranda , thus accentuating their traditional look, the quintessential paranda has ruled the screens. Normally, the colour of the paranda matches that of the outfit. Cool and trendy for sangeets and various other functions.

A very traditional and ethnic trousseau of Punjab, and found mostly in rich hues and fabrics, the Punjabi salwar with all its embellishments and adornments, has graced the looks of many celebs across the nation and commoners too. The Punjabi salwar comprises a kameez, a salwar and a dupatta – top, bottom, and a scarf for the bust line, respectively. Yes, till date you’d find girls and women of all age groups in a colourful soiree of Punjabi salwars. However, you must understand which salwars suit would suit your body type.

If you’ve ever been to Punjab or a Punjabi wedding, you’d find many women dolled up in bright and shimmering Punjabi ghaghras. Punjabi ghaghras range from nine yards to twenty-five yards, and is worn with a short kurta, along with a phulkari that covers the head. Made from muslin or malmal, the Punjabi ghagra has a finishing done with embroidery, pin tucks and gota for the border. The choicest of Punjabi ghaghras are found made of latha, hari-shael, saatan, phulkari and silk. The materials used are quite expensive, and for you to own one in Punjab would surely be a style statement.

As seen in Bollywood movies – Bunty Aur Babli, Jab We Met and worn by celebs such as Kareena Kapoor, Rani Mukherjee, Sonakshi Sinha, Shilpa Shetty or even Sunny Leone for that matter, the Patiala Salwar has taken every fashionista’s heart by their tendons. In the past, the Patiala salwar was known to befit the fashion sense of the royals only, however, with the passing of time, almost every girl and woman on the streets of Punjab has a set to flaunt. Patiala’s can be worn with shirts (long and short), a tee, as an Indo-Western fusion, or with a short kurti/kameez too.

[Also Read: Fashion at its Best with Patiala Elements]

The Punjabi kurta is worn by men and women alike, while the tamba or the tehmat is loose piece of fabric that resembles a lungi and worn by the men only. Mostly worn by the bhangra dancing groups, the tehmat has gained popularity across the nation because of its comfort factor and the range of colours it comes in. The laacha is the feminine version of the tehmat, and is worn by women only. The tehmat has a fewer folds than the laacha, which resembles a traditional sarong. And in both instances they are wrapped around the waist!

Irrespective of the age group, Punjabis are known for their attitude and confidence, which is ‘well-shown’ in their gatherings when they come all dolled up. Fashionable and very haute-couture like, designers across the nation and the globe seek inspiration from the Punjabi brigade to inculcate more on the fashion experience as seen.

Simple Tips on How to Pick a Good Nursing Bra

The Celebrations Began! Check Out The Wedding Details Of Priyanka Chopra...

Here’s An Insight To The Saga Of Hollywood Plastic Surgery –...

Our Top Picks Of Gorgeous Maang Tikka Designs For Your Sister’s...

19 Home Remedies To Get Rid Of Nasty Razor Bumps

Fashionlady - June 25, 2017 4
Summers are here, and this means you would change your wardrobe from woolens to short skimpy numbers. With that being said, most of us...