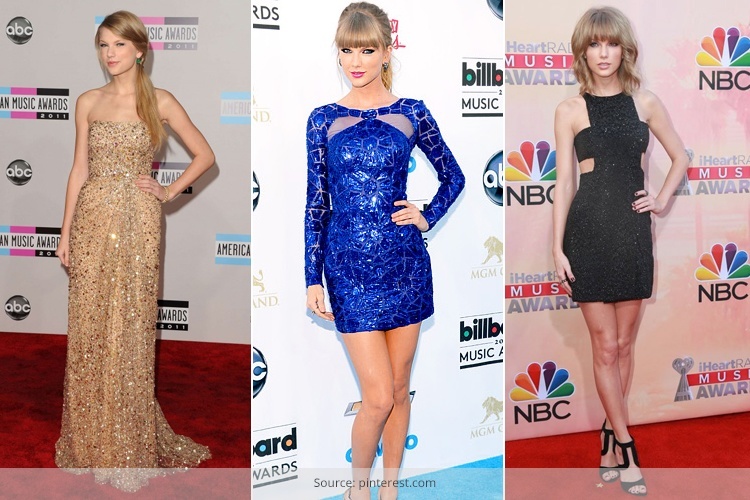 She carries a style of her own, and has never found herself in an awkward situation at the red carpet. Taylor Swift red carpet style is all about panache and pizazz. The country singer has a signature style of her own and it hints through all her red carpet dresses.

Mostly seen is shimmery floor length gowns, Swift is now experimenting with knee length and short dresses as well, however, the sophistication in appearance refuses to desert her, no matter what she wears. Take a look at Taylor’s red carper fashion moment.

The award winning singer and song writer flamboyantly appeared in her trademarked sparkly Taylor Swift red carpet style in the 2008 CMA Awards. The Kaufman Franco gown of the 18 year old Fearless singer made all heads turn and eyes glued to her charismatic display. With her hair neatly tied in a bun she kept jewelry to the minimal. Lorraine Schwartz studs and Christian Louboutin shoes were more than enough to complement the sequined floor length apparel.

Keeping up with her love for sequins, Taylor graced the red carpet of Grammy 2010, covered in this Kaufman Franco midnight blue sparkling number. She chose to stick to her favorite line of jewelry, Lorraine Schwartz to add some drama to the ensemble, and had chandelier earrings swinging down her ears.

The Country cutie looked phenomenal in her signature sparkly metallic red carpet dress. The almost endless Reem Acra ensemble boasted a graceful train and was covered in metallic dust all over. The only accessory she added was a gold bracelet. Her hair was swept to the side and neatly tied in a pony. Shimmering in gold, she was nominated for Favorite Country Album and Favorite Country Female Artist.

Tay walked the red carpet of Billboard Music Awards in a very girly red Elie Saab gown. The look of the extravagant chiffon dress laced with chiffon panel was completed with Neil Lane Jewels. She wore her straight hair down with fringes falling on her forehead. Whatever the paparazzi cameras were craving for, girlfriend had it all.

The 47th CMA awards saw a fiery side of the artist setting the red carpet on fire with her red satin Elie Saab Fall 2013 Couture gown. The Taylor’s floor length dress was detailed with beads and displayed an open back that sat perfect for Tay’s sculptured silhouette. Her hair was neatly arranged in an updo with bangs covering her forehead, the red pout blended seamlessly with the look. By now we know, when it comes to jewelry, our star girl trusts only Lorraine Schwartz. Jimmy Choo was what she picked up for her delicate heels.

Very intelligently, Taylor matched the blue carpet of the Billboard Music award 2013 with a blue Zuhair Murad dress. And she broke the monotone of a long list of floor length collection with this short number maintaining the Taylor Swift style in glitz. She opted for Jimmy Choo shoes to go with the blue mood. The look was completed with a high pony tail, bubblegum pink lips and dark eyes.

She finally decided to relax on the shimmer part and arrived at the Golden Globes 2014 in this Carolina Herrera gown. The shoes, though hidden under the floor-sweeping gown, are Christian Louboutin and she maintained fondness for Jimmy Choo through the clutch. Her signature red lips and dramatic hairdo were perfect for the look, and yes, she stayed loyal towards Lorraine Schwartz jewelry as well.

The iHeartRadio Awards witnessed Swift in something that she doesn’t do much often, that is walking the red carpet in shorter dress. Yes, her red carpet dress 2015 iheartradio Awards was an LBD which she carried like no one ever did and was a perfect belle of the ball. She continued her affair for glitz with this black Kaufman Franco mini dress which she complemented with a pair of black Tamara Mellon shoes. The rings that she sported on her finger were by Rachel Katz and Porter Lyons.

[Also Read: Here’s What You Can Learn From Taylor Swift’s Style]

One can’t really make a list of Taylor Swift’s best red carpet walks, because somehow whatever she dons embodies the brilliance of her personality. Her class is unmatched and undisputed. She has it in her to make any garment a show stopper. We could just boil down to a few of our favorites. The songstress doesn’t get done with the shimmer and nor do we get done with her aura.