If there is one Indian talk show that gets every celebrity to the edge of their seat it’s Koffee with Karan, hosted by the man who knows all that happens or is about to happen in the industry, Karan Johar. With the 5th season just about to be wrapped, we have to agree this season was as promised more hotter, controversial and sensational than ever with celebrities battling it out with their host. Having brewed his koffee well, Karan ensured celebs spilled their beans and reveal all that was being concealed.

With the season wrapping here’s a quick roundup of all the tinsel town beauties, who survived the couch this season, of course with their smashing fashion sense.

Alia Bhatt was the first to take to the infamously famous couch this season alongside King Khan. For her appearance on the season 5 of her mentor’s talkshow, Alia chose to put across a bold statement, and manned up to take over the red couch. Stylist Ami Patel styled up her muse in a bespoke white pant suit from Armani. The lady sealed her boss look with a pair of black and brown Louboutins and beachy waves. We have to admit, Alia just nailed it. 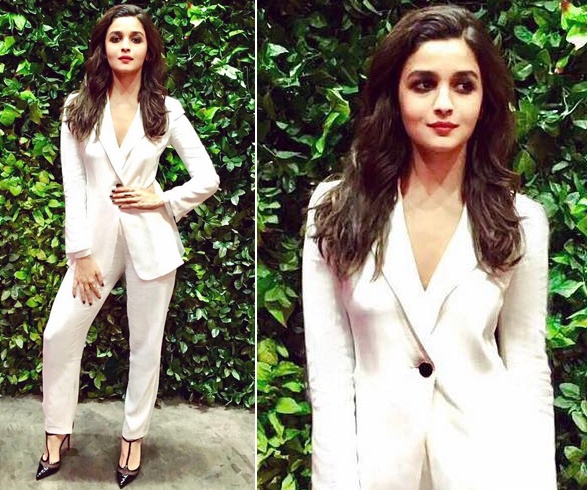 Alia Bhatt was the only celebrity who made it to the couch two times in a single season of Koffee With karan. This time the lady starred on the couch with her Badrinath ki Dulhania co-star, Varun Dhawan. Dressing up more chic, for her re-appearance on the show, stylist Ami Patel dressed her favorite muse in a geometric pattern, monochrome midi dress from David Koma. 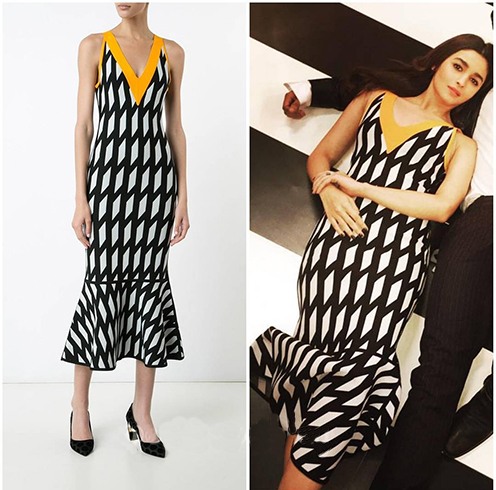 This season saw the debut of Twinkle Khanna on Koffee With Karan, who took the couch with husband Akshay Kumar. The lady is known for her wit, and she just ruled the episode with her fervent replies, that not only left Karan speechless, but Akshay too. Undoubtedly, one of the best episodes of the season. For her debut performance senior stylist Priyanka dressed up Twinkle in a pretty pink dress from World McQueen picked at Le Mill. Keeping it classy and minimalistic, she rounded up the look with a Bulgari cuff. Parineeti dressed up hot for her Koffee With Karan Season 5 appearance. Turning up the heat on the couch was the lady dressed in fitted Gaurav Gupta separates. Stylist Sanjana Batra styled up this all black look with a pair of black peeps from Charles and Keith and jewelry pieces from Jewel Diaries. Special credits to Marianna Mukuchyan for those envious beach waves and smoky eyes. 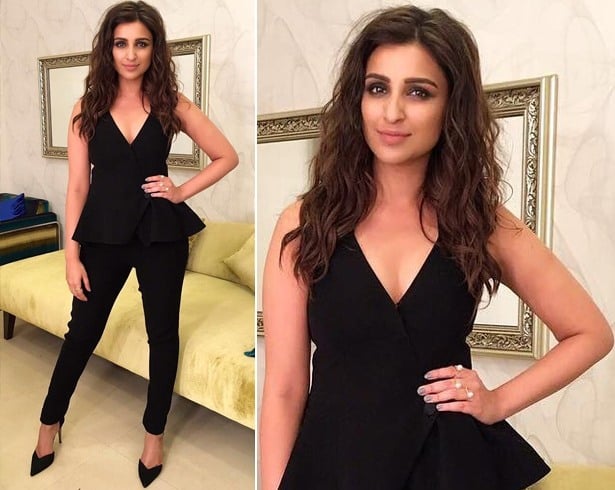 Katrina Kaif dressed up in a fiery yet exotic red number to take on Karan’s questionnaire. Styled by Tanya Ghavri, Katrina opted for a midi dress from Roland Mouret. The broad neckline flaunted Katrina’s collar bones well while the fit hugged her curves just right. Keeping it minimalistic and fresh, a pair of black Louboutins sealed the deal for Kat’s appearance on KWK Season 5. Mira Kapoor wowed us with her confidence on her first ever talk show. The lady did not just level up with her industry veteran husband but surpassed him with her candid replies. Unabashed and unintimidated, she definitely made this New Year special, worth a watch. Stylist Anaita Shroff Adajania dressed her up in a blue off shoulder gown from Saloni Lodha and jewellery pieces from Gehna Jewellers for some added sparkle. Elegant and classy, Mira awed us with her Koffee With Karan appearance. 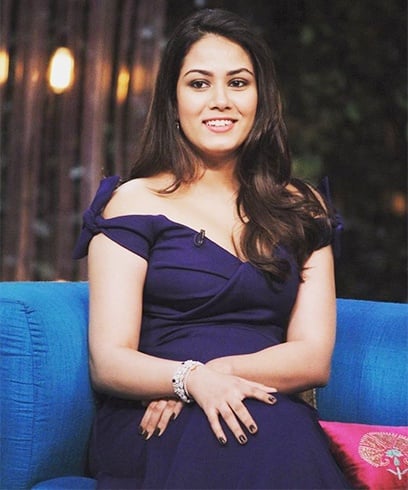 Jacqueline made her way to the Koffee With Karan couch with Siddharth Malhotra, looking absolutely ravishing in red. Stylist Tanya Ghavri draped this leggy lass in separates from Prabal Gurung. The high neck coupled with bell sleeves and flared bottoms looked gorgeous on the diva. A slightly dewy face, a pair of nude pumps and a chic ponytail rounded up the woman’s look as she headed for the couch looking red hot. 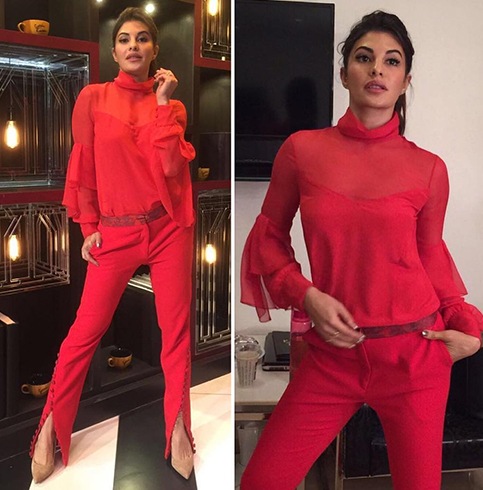 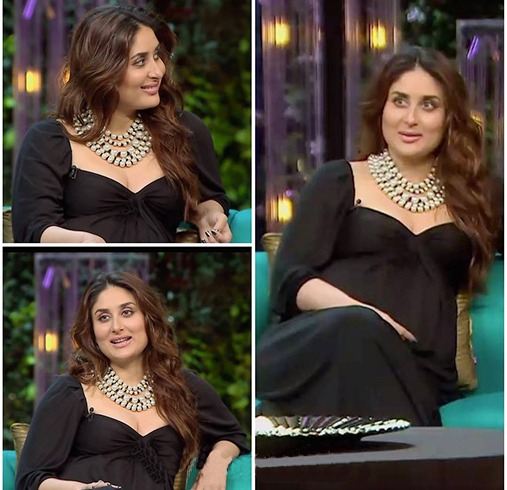 The admitted fashionista of Bollywood, Sonam Kapoor dressed up “haute” for her Koffee With Karan episode. Dressed up sophisticated in a Dice Kayek ensemble, Sonam took monochrome dress up to all new highs. Stylist Rhea Kapoor added a tinge of rich emerald, styling up the outfit with a pair of round earrings from Mehernosh Heeramaneck. While her dressup continued to wow us, it was her more guarded conduct that left us wondering if the actress had really matured or it was just to avoid the Koffee With Karan after effects. Koffee With Karan Season 5 would have been incomplete without Priyanka Chopra gracing the couch. A global star now, Priyanka has risen to a level of stardom, very few are privileged with. With a successful year behind, 2016 indeed was PC’s. We are not surprised that Priyanka was invited solo on the chat show, because no one would have matched up to this superwoman. Turning heads in a Fendi gown Priyanka looked fetching. We heart that floral ruffle detailing. Credits to stylist Ami Patel who styled up the look with jewelry pieces from Nirav Modi. Everyone loves Farah Khan, especially on a chat show, because the lady is fearless and talks real stuff. A Koffee with Karan patron, Farah was accompanied by her bestie and Tennis superstar Sania Mirza. Like always, Farah was on fire when it came to answering Karan’s list of questions but what really caught our attention was her gradual weight loss and a distinct glow coupled with a pretty dress up. Guess finally the lady has taken up her appearance seriously. Stylist Ami Patel camouflaged Farah’s plum figure in a rich emerald gown from Rohit Gandhi and Rahul Khanna that rendered her a beautiful look. Debuting on the Koffee With Karan couch was World No. 1, tennis superwoman, Sania Mirza. Paired with her bestie Farah, these two fiery woman turned up the heat on the couch putting up quite a show. Sania flaunted her glamorous side dressed up in a red hot Amit Aggarwal draped number. Accessories from Anandita further elevating the look. Hair stylist Namrata Soni sealed her look to perfection giving her a beachy wavy hair updo. 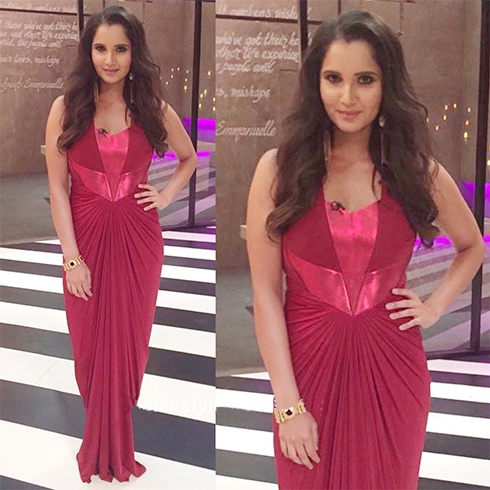 Known for her daring soul, Kangana is one woman in the industry who has the heart of a lion. The woman is fearless and adventurous, and does not shy away from accepting and exuding her dauntless vibe. Courageous and confident, her personal fashion has always been unconventional and inspirational. A true trendsetter, Kangana who is awaiting her next release Rangoon, was invited on Koffee With Karan with her Rangoon co-star Saif Ali Khan. Stylist Ami Patel dressed up Kangana chic, in a white curve neck dress from Victoria Beckham that complimented her short hair look. The woman as always carried herself effortlessly and with much panache. 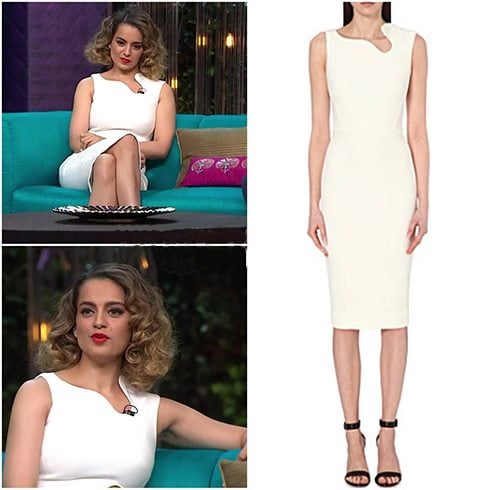 Neha, who currently is airing her own talk show podcast was invited for the finale episode of Koffee With Karan Season 5. We hope Karan is all set to return the favor by gracing her show. To take her seat on the famous red couch, Neha opted for a more bohemian and vintage look wearing a striped jumpsuit from Nupur Kanoi. The lady rounded up her look with accessories from Swarovski. 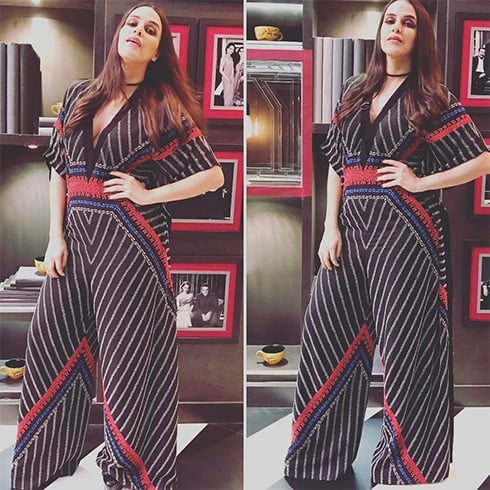 Much in news for her statement fashion and her personal life, Malaika Arora Khan was invited to wrap a yet another cracker season of Koffee With Karan. The lady made her way dressed mystic in an all black ensemble. Malaika made for a showstopper appearance in a black mermaid gown from Avaro Figlio, that flaunted her curves to perfection. She coupled her magical black look with a sleek hair updo. 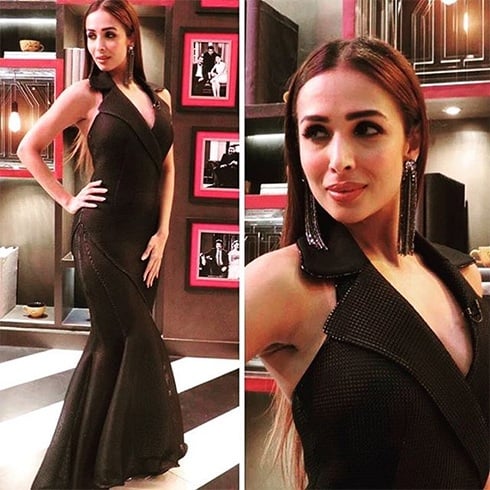 That was all about the tinsel town beauties who revved up the glam quotient of Koffee With Karan Season 5.

39 Wonderful Home Remedies for Cavities Along With Causes, Symptoms and...

Eyeliner Tips and Tricks for Every Event

Heard Of Needle Lace Necklace Pattern? Here’s Why They Are So...