With the news of Kangana Ranaut’s next royal movie Manikarnika: The Queen of Jhansi making rounds, our news feed has been filled with images of Kangana. While her look depicts royalty at its best, Kangana Ranaut Fashion Profile for the promotions would be great to watch! While Kangana usually brings on the glamour on the red carpet, it’s her daily style that truly captures our eye. She has a strong personal style that is between chic and athletic, as she mixes athleisure and high end brands with equal comfort. The actor is also not scared to make a style statement and bold fashion choices at any given time. Her numerous sari and brogues airport looks are proof of that.

If you’ve moved on from Kangana Ranaut’s nepotism scenario, we would want you to recollect the times she proved her mettle in the Industry like no one else. Sure, the Queen actor is famous in her own right, but was she born with these skills? Was her family supportive?

In all likelihood, her family was said to be skeptical about the fact that she wanted to become an actor. But fast forward to present- they have zero reservations. Read on to discover who her parents are and lets have a sneak peak into her life. 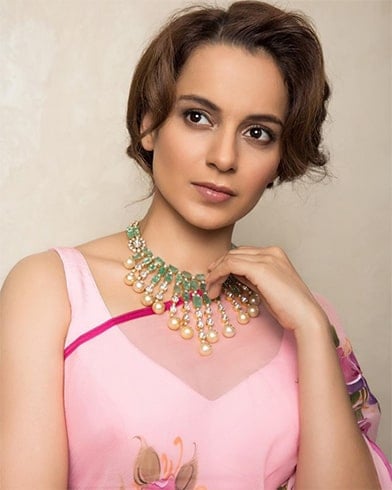 Kangana Ranaut was born on 20th March, 1987. Her birthplace is Bhambla in Mandi district, Himachal Pradesh. Her father Amardeep is a contractor and businessman while her mother Asha is a school teacher. Most of her childhood days were in Dehradun where she studied in DAV High School. As a child, she actively participated in elocution, debates, and sports.

After completing school, Kangana attended a Science College in Shimla. During that period, she enrolled herself to the Elite School of Modeling and also joined Smita Theater Group to learn acting under Arvind Gaur.

With her mind firmly set to become an actor, she decided to move to Bombay. As luck would have it, she was spotted at a café by director Anurag Basu who eventually signed her for a leading role in Gangster.

Ever since then, Kangana has won three National Awards consecutively for her impeccable performance in movies Fashion, Queen, and Tanu Weds Manu Returns, respectively. 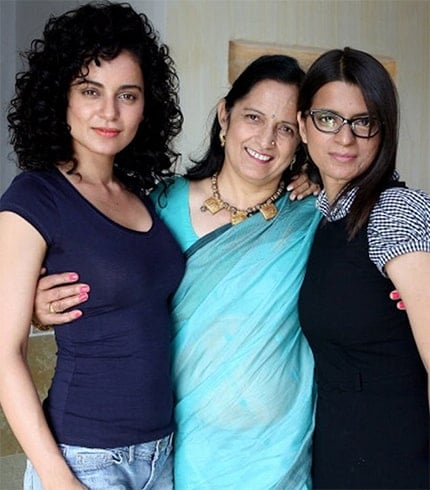 Kangana is one of the youngest actresses to receive the National Awards. At the age of 22, she also won Best Supporting Actress for Fashion.
She started off as a theatre actor with Asmita Theatre Group in Delhi under director Arvind Gaur. Her theatre debut was Girish Karnad’s Taledanda.

Kangana Ranaut completed her schooling from DAV’s High School. After school, she took up science to become a doctor. But later she moved to Delhi to pursue theater and joined a group called Ashmita.

She also took up French classes in the dreams of moving to Paris and becoming a model. But fate had other plans. With her sheer determination and hard work, today Kangana is a much celebrated actor in India. 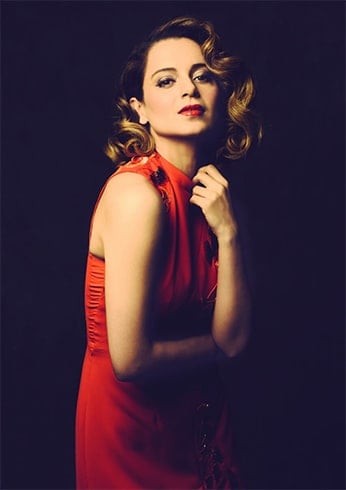 Kangana has shut down critics with her versatile acting chops. Her defiant roles in non-commercial movies like Tanu Weds Manu, Queen, Simran, Fashion, etc proved her mettle as an actor. At present, we are eagerly waiting for her epic movie Manikarnika: The Queen of Jhansi and Mental Hai Kya, a comic thriller with Rajkummar Rao.

By 2017, Kangana had already become the recipient of three National Awards. She won the Best Supporting Actress for Fashion in 2008 and two consecutive awards for Best Actress for Queen (2014) and Tanu Weds Manu Returns (2015).

The star states her wardrobe changes according to her state of mind. She described her style to be moody and earthy. Let us take a look at her numerous risk taking looks in recent times.

Kangana showcased a Pankaj & Nidhi creation on the Winter/Festive 2018, Fashion Week held on August 25. She looked divine in an embellished midnight blue gown, matched with cobalt blue eyeliner, and sleek hair tied into a neat ponytail. 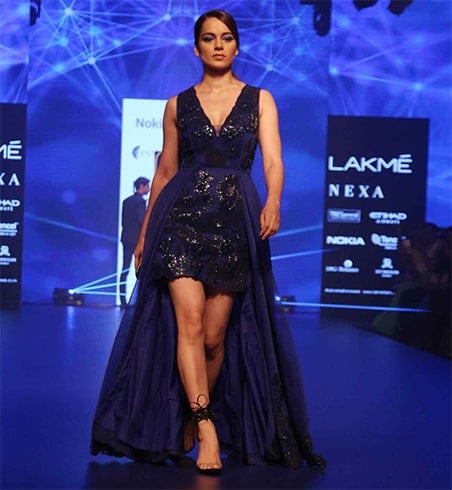 The actress airport looks has been much talked about. One of her recent looks was her night flight to Delhi. She wore a set of white coordinates featuring a shirt and culottes paired with a black Chanel bag, brogues, and loose waves. 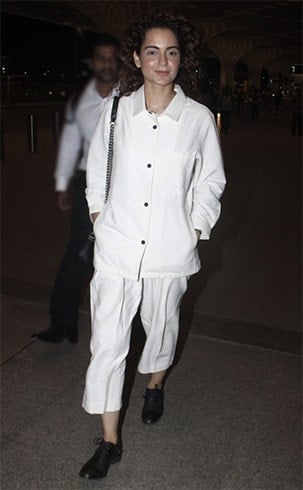 At the edition of Reebok Fit to Fight Awards in Mumbai, the event saw Kangana walked the ramp in a maroon Tony Ward gown and a matching ruffled cape. 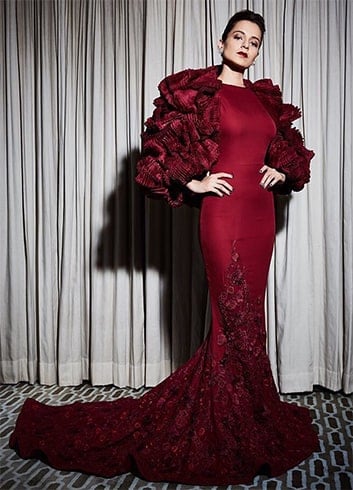 For the ninth edition of the Vogue Beauty Awards, 2018 Kangana wore a Gaurav Gupta deep red gown, marsala lips, and a diamond necklace to match. She won the Beauty of the Year Award, and we agree, there isn’t a more deserving recipient than her. 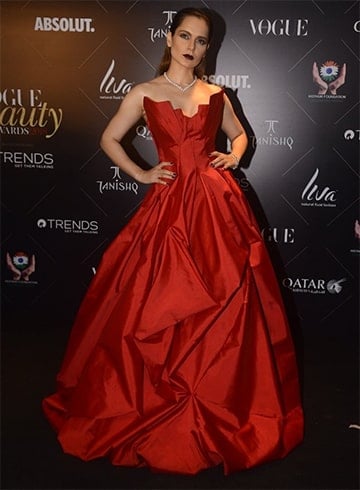 On her second day of the 71st International Cannes Film Festival, Kangana stepped out for shopping in the perfect summer blue number by Elisabetta Franchi paired with a yellow Tod’s bag, and Dior shades. 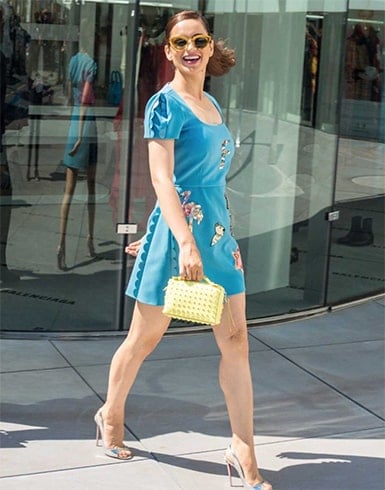 For her debut look at Cannes 2018 at French Riviera, Kangana wore a suit featuring a jacket, bra, and trousers by Tussardi matched with necklace by Alighieri Jewellery. 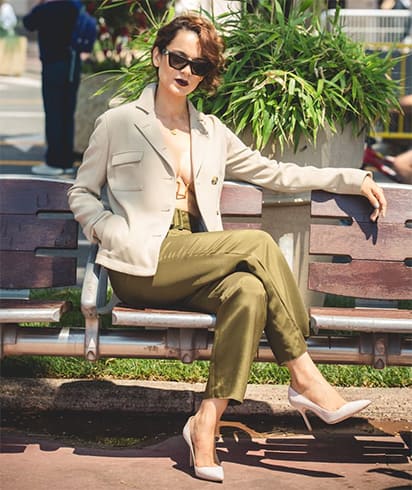 We love how the actor gives a fresh twist to her sari look each time. For this particular look, she gave a break to the brogues and instead matched her sari with a cold shoulder ruffled blouse with belle shoes. 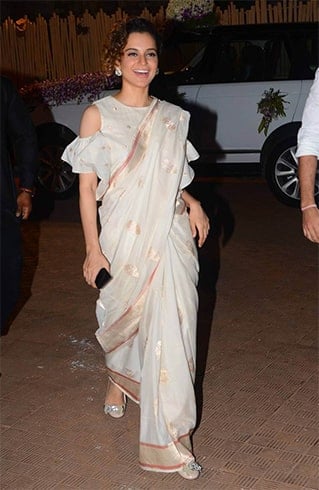 This was a memorable photo shoot of Sabyasachi’s creations in 2017 where she was captured in several Indian looks. One of them included this silk bodycon kurta and khadi churidar look matched with a tissue dupatta. The outfit was worn with a statement Sabyasachi’s Heritage Jewellery Collection polka and emerald choker 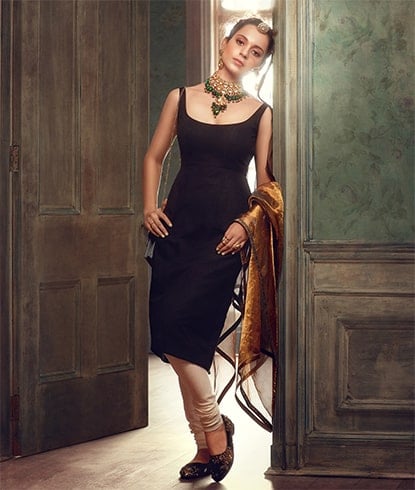 The actress has maintained a polished and minimal looks throughout the year proving that real beauty comes in unique shades and shapes.

As most celebs, Kangana also swears by the CTM (Cleansing, toning, and moisturizing) routine.

One of the beauty advices her makeup artist gave her was that heavy makeup cannot be wiped off with five minute cleansing. So she takes care to take 10-15 minutes to cleanse her skin.

Once her face is free of makeup, she finishes with a toner, and slaps on moisturizer and eye cream.

Kangana loves organic products and uses shampoo from FabIndia. She also loves intensive hair repair treatments and makes it a point to oil her hair thrice a week. It’s kind of a given this A-lister is blessed with gorgeous curly hair and is well-known for it. She can work whichever hairdo she like both on-and-off-screen and pull it off brilliantly. Scroll through and decide which style you prefer Kangana in-curly or straight hair? 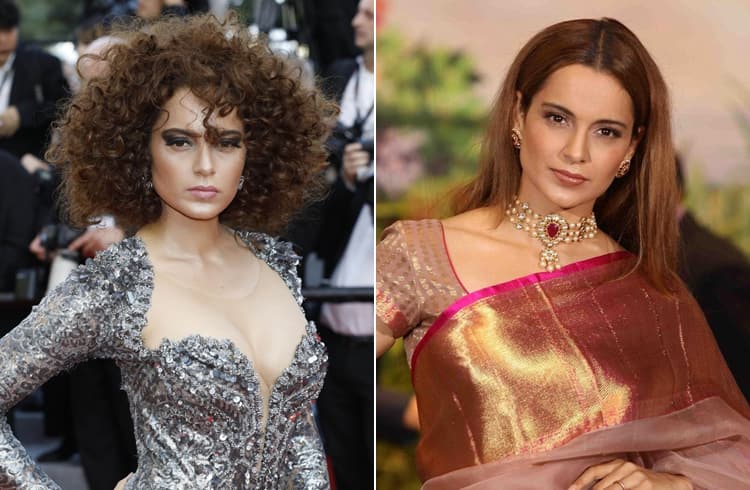 Have you seen Kangana without makeup? Have a look below. The actor is a vegetarian by choice and that mostly explains Kangana Ranaut Fitness Secrets. Apart from that, the actress enjoys doing yoga and pilates. Her trainer is Sidhart Singhor with whom she works out three to five days a week.

Here is a breakdown of Kangana Ranaut Diet Plan:

7:00 am: Kangana believes in waking up early.

7:30 am: She begins her workout routines which include a lot of stretching exercises, pilates, and yoga. But she takes a complete break on Sundays and rest.

9:00 am: Have a simple vegetarian breakfast which include mostly of dosa, paratha, idli, and poha.

1:00 pm: For lunch, she takes dal, rice, and steamed vegetables.

4:00 pm: For snack, she takes veg sandwich, toast with honey or avocado.

7:30 pm: For dinner, the actor keeps it light and takes dal and chapatti.

10:00 pm: She sleeps off early and believe in having a seven hour sleep. 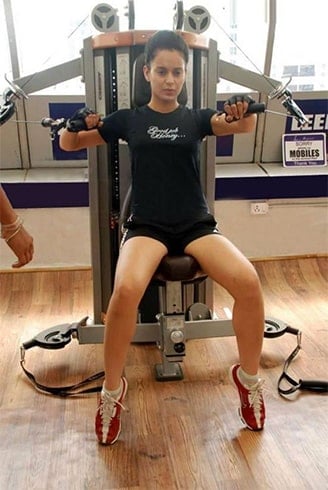 Even though Kangana has famously said no for endorsing fairness based products, she has endorsed a lot of other brands. Here is list of them: Unfortunately, Kangana Ranaut abstains from social media as she is a private person.

So what do you think about Kangana Ranaut eclectic fashion choices and profile? Do you have any thoughts on her fashion looks? Write in to us in the comments below.

Getting A Cartilage Piercing? Know This First!

Getting Inside The Dabboo Ratnani Calendar 2016 Launch!

Cancer Zodiac Fashion – What Your Cancer Sign Says about Your...