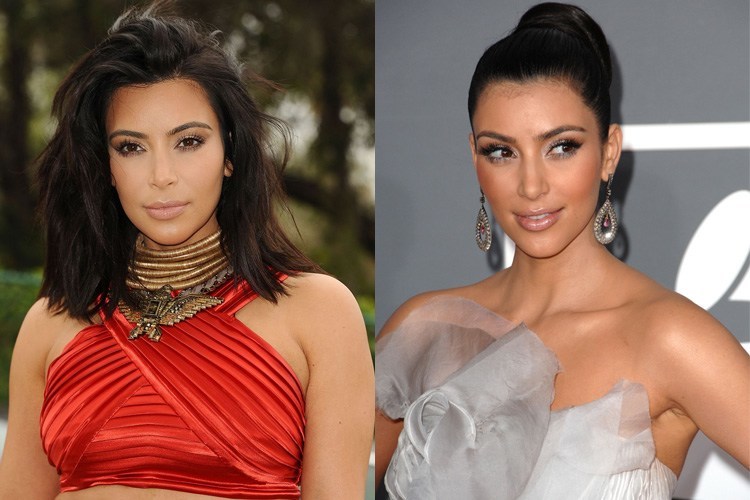 If there is one Hollywood celebrity who is hallmarked for making dramatic transformations to her long enviable commercial worthy tresses, it is Kim Kardashian, the reality TV star who metamorphosed into an entertainment mogul. Except for short hair, she had just about experimented with all colors, cuts and styles and putting her fans under her beauty spell since over 8 years. Predominantly adorning long hairs; let’s run down the memory lane with few of Kim Kardashian best hairstyles.

[Also Read: A Thing Or Two About Hairstyles From Katrina Kaif]

This Kim Kardashian hairstyle for a photoshoot in 2009 shows her fascination with short hair even if she never got her long tresses cut. Pins and hairsprays can indeed work magic!

Great thing about thick voluminous tresses is that they form terrific voluminous updos. The braided updo adorned at the street style fashion ideas is definitely one of the top favorite Kardashian hairstyles.

While promoting her fragrance, Glam in Las Vegas, Kim donned a bohemian looking braided updo. With loose wispy tendrils hanging loose randomly and a deep center part, the look was quite done, yet so undone. This Kardashian hairstyle is definitely a perfect juxtaposition of low-key as well as luxe.

The casual top knot while on a tour to Washington DC looks amongst favorite hairstyles of Kim Kardashain which she adorns on number of casual occasions.

Intricately designed hairstyles with multiple milkmaid braids and a crooked side-part, this Kim Kardashian hairstyle at the 75th anniversary of the Los Angeles Mission in Los Angeles is a shining example. Framing her beautiful face, Kim not only looks trendy and girly but also super sexy and glam.

For the Angel Ball, Kim styled her hair into a intricate side swept braid. Few strand peeking out here and there made her look super sexy and ultra feminine.

Kim looked super cool and sensual with her raven tresses styled into messy undone braids having several plaits and flaunted at the side. A fabulous intricate hairstyle, that looks fabulous on Kim.

The boxer braid or the Dutch braids with center part and hair dyed into the platinum blonde sheen looks so becoming and natural on her. No wonder it’s her hot favorite!

Kim has incredibly long beautiful tresses which she loves showing off in cool and fashionable looks. Lets refresh our memories with some of her most gorgeous looks.

With a center part, this simple Kim Kardashian straight hairstyle looks simply terrific on her whether its black, ombre, brown or any other color, Kim chooses to flaunt them with.

Kim channeled Veronica Lake with her wedding style long retro Hollywood curls with a deep side part. The look was highly smoldering and glamorous and made her eyes pop out.

The sleek simple ponytail has never looked as stylish and sexy as it looked on Kim when complemented with blunt cut bangs.

Radiant colored and highlighted brunette locks with bangs are all that kim Requires to ooze raw sensuality as she walks the red carpet at the Comcast party.

[Also Read: Hairstyles With Bangs That Remove 10 Years From Your Face]

Attending the Midori Makeover Parlor Event, Kim looked too stunning in her flawlessly styled side sweep.

Styling her luxurious mane into the 1940s waves and sweeping them back from her face, Kim looks very elegant and chic.

At the Roc notion pre-Grammy Brunch, Kim got her long tresses to medium length and rocked it in a messy look with a side part.

With her innate fashion sense and her mesmerizing beauty, Kim can sport any look effortlessly, whether it is a neat sophisticated one or a casual wild one.

All That Glitters Is Pure Gold Jewellery Design

Top 6 Proactiv Products And Its Uses

International Magazine Covers January 2018 Are A Ray of Sunshine That...

Fashionlady - October 21, 2016 0
Whether it is your big night of your high school or college, or your first day at office, how are you going to announce...