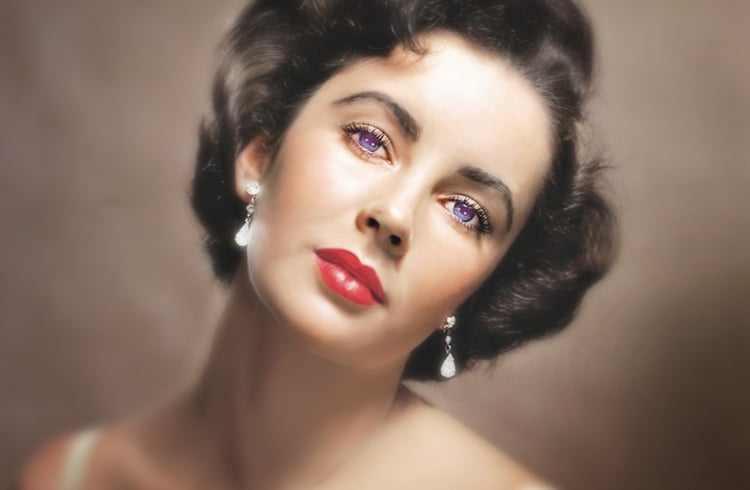 What Is Alexandria’s Genesis?

Alexandria’s Genesis, also known as purple eyes or violet eyes is a well known genetic mutation as told by the medical experts. An individual is born with natural blue or gray eyes, but over time change to purple. It is when the individual hits puberty, that the Alexandria’s Genesis strikes the most. It changes the color to a deeper royal hue- violet-bluish tones or darker than what it was. However, just because the hue gets darker, it doesn’t mean that the orbital functions of the eyes would be affected or impaired over time.

However, scientists say that men and women with Alexandria’s Genesis lack the following during puberty and adulthood:

In other medical research, it has been identified that there are various symptoms that are associated with Alexandria’s Genesis- white pale shimmery skin for example. Such skin types are prone to heavy sunburns, sun damage and tanning too. Alexandria’s Genesis is mostly found in women since the mutation among females has been reported more than males.

The talk on Alexandria’s Genesis has its roots dated back to 1000 years ago in the valley of Egypt. They say it was a mystical light that was seen flashing in the sky, which attracted the locals to come and watch. Whoever witnessed the light in person, had their skin turning into a pale tone and eyes into Purple- hence the name Alexandria- a town in Egypt. Mythology says that people with Alexandria’s Genesis are ‘spirit people’ and they moved north after the incident and eventually couldn’t be spotted by others too.

Around 1329 in England, the first recorded case of Alexandria’s Genesis was noted. It was when a newborn with the name Alexandria was born- purple eyes were her specialty. Alexandria went on to live 100 years says the records and she apparently had kids with the same colored eyes too. It was not until the late 1960s when the world realized what the real generic variant was which caused the happening of Alexandria’s Genesis.

The Real Reason Behind Purple Eyes

Purple eyes can be caused not only due to Alexandria Genesis, which we have spoken about at length but also due to Albinism.

Yes, Alexandria Genesis could also be caused due to a skin disease called albinism. This disease happens when the pigment melanin in the skin is very low in amounts or absent. Science has thus associated albinism with Alexandria Genesis. And furthermore, it is said if even people with blue eyes have an eye injury due to the harmful rays of the sun, the eyes turn a dark shade of purple over time. 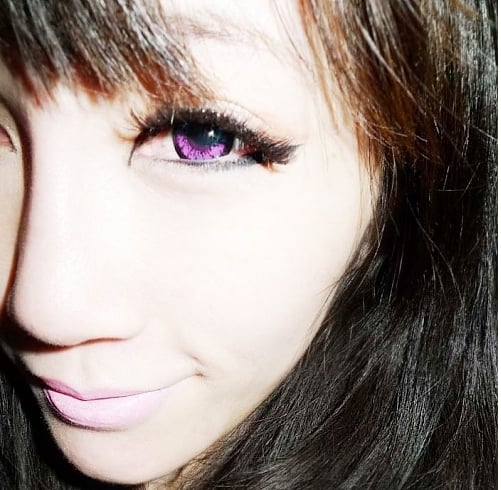 Can a person have purple eyes?

The debate on whether Alexandria Genesis exists or not is never ending. The breath-taking purple eye syndrome or Alexandria Genesis is basically a genetic mutation, which we have discussed earlier. And more so seen when babies turn six months old. In cases that have been reported, doctors have noticed colors changing to a sheer silver and then to a dark purple during puberty. But this wouldn’t affect the vision of the individual as he or she ages. The vision, as said by medical experts is 20/20. 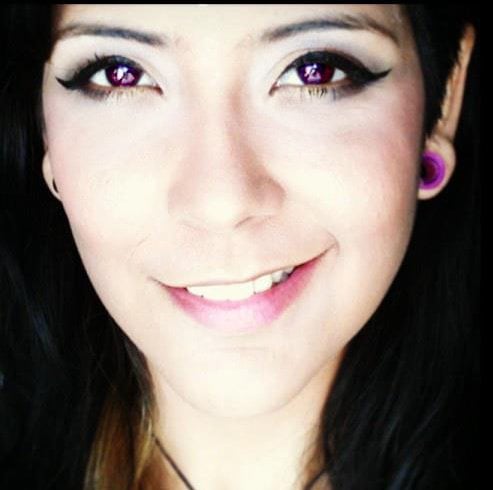 What Percentage Of The World Has Purple Eyes?

Can People Be Born With Purple Eyes?

An individual is born with natural blue or gray eyes, but over time the eyes change to purple. It is when the individual hits puberty, that the Alexandria’s Genesis strikes the most. It changes the color to a deeper royal hue- violet-bluish tones or darker than what it was.

While we talk about Alexandria Genesis or purple eyes, we did try looking out for celebs that have the same condition; one name that featured across many debates and talks was that of the yesteryear golden age Hollywood diva, Elizabeth Taylor. While many critics said she wore lenses, her close confidantes begged to disagree. If you take a close look at the classic movies Cleopatra and Who’s Afraid Of Virginia Wolf; the actress has been seen with deep purplish-violet eyes. She wasn’t wearing contact lenses for sure; contact lenses came about in the late 1980s. Hence the debate back then was settled as the diva being the only famous personality with Alexandria Genesis. 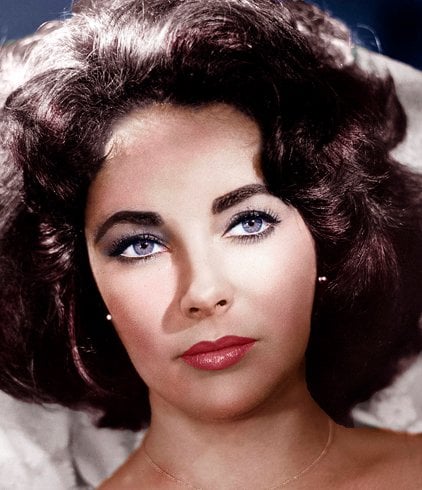 At Fashion Lady, we really want you to be gorgeous and beautiful always. Hence, if you have purple eyes or wear lenses in that hue, your eye makeup choices should be apt and stunning. You can accentuate the eye makeup by using complimentary colors that would make the purple eyes stand out. When you know your undertone and the dominant color of your eyes, you will then know how to apply makeup the right way. If you have gold reflects in your purple iris like some women do, applying brown or golden eye shadow on light notes would be best. If the undertone of your skin is bluish green and your eyes are purple, you can use a light purple eye shadow. Since purple eyes are rare, it would be best to stick to very light hues for eye makeup and not overdo it. 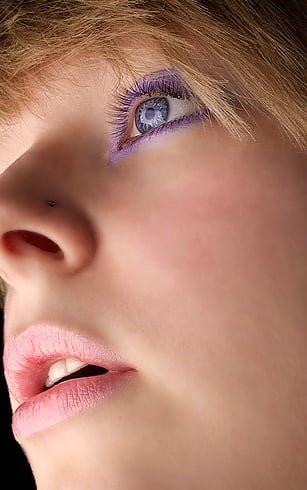 Purple eyes are no different from other colored eyes but are extremely sensitive to the harsh rays of the sun since they cannot handle the UV rays. If proper protection in the form of dark shades isn’t worn when going out, chances are that the eyes would not be able to handle the glare and bright lights outside. There could be retinal detachment as well. This is because the melanin is absent and there is no protection to the iris from the UV rays. One should always be in touch with their eye doctor or the optometrist, as only he can tell you best about the conditions and what to do to make sure your purple eyes are healthy.

If you have albinism and purple eyes together, it means that the pigment of the eyes, the hair, and the skin are almost nil. This is why the light from the sun bounces to the back of the eyes and reflects softly as it would in other colors for eyes. The light reflects because there are very low counts of blood vessels behind the retina. Thus, it can also make the eyes look reddish purple in some cases, or bluish purple; blame it on the lack of melanin and as mentioned, the bouncing off of the light when it hits the iris. This is why, when we take photos of anyone, we see red eyes- explains it clearly, since light doesn’t have an exit path. 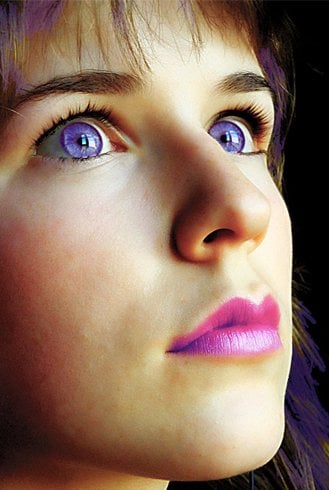 What Is The Science Behind Eye Color Changes?

Most people with cool toned eyes- green, hazel or blue have reported that their eye colors change over time. Some of the reasons why this happens are:

Green and blue eyes are colors that are born of the quality and the quantity of the light they receive, and not from the pigment. Refer to the color wheel in our previous posts where we spoke about the primary colors. In the same way, lighting conditions too play a great role in the quality of the eye and the change of color thereof. Even your mood can be a reason why the color of your eye changes over time, say experts. But remember, it is not the melanin quantity that changes, but the way the light reflects when it bounces into the iris of the eyes and scatters around. 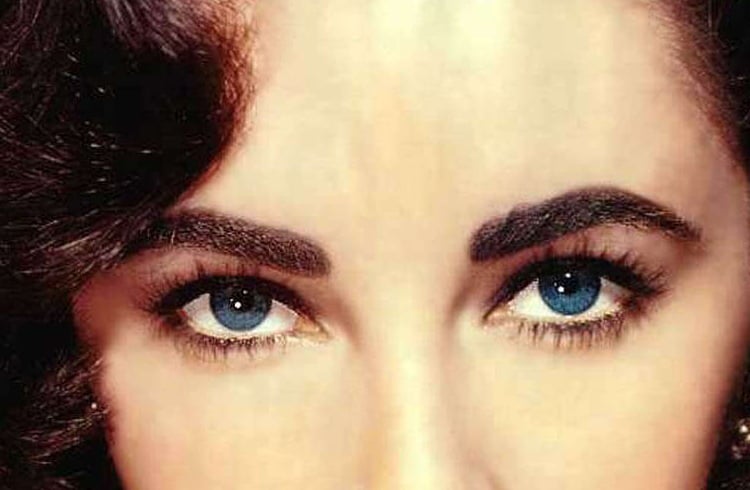 With babies, the eye color isn’t constant in the first years of its life. Even the myth of putting honey in your eyes to change your eye color is gibberish. Honey can inflame the cornea, which is harmful and that is why there is a temporary eye color change. The iris is a complex zone of the eyes, and eye color changes happen when there are drastic overtime changes of pigmentation, the texture, fibrous tissue and even with the blood vessel movements within the iris zone and the stroma too.

For example, heterochromia happens when one individual has two different eye colors, different from one eye to the next for the same pair. This is because of the uneven distribution of melanin.
We hope by now you have found in-depth information about Alexandria Genesis. Purple eyes are rarest of the rare as we have mentioned and informed. And whether people with purple eyes exist or not, is debatable. But if you do choose to wear makeup with purple eye lenses, we have given you a few tips on how to do so. Do write in with your thoughts.

Simple Tips on How to Pick a Good Nursing Bra

15 Bath Salts You Can Buy in India