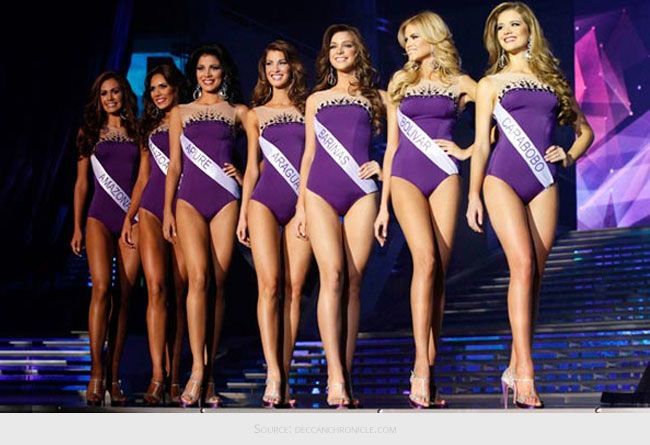 Just as almost every family in Brazil dreams of producing a football star, parents in Venezuela are pushing their daughters to win the Miss World Pageant. It seems the country which has produced 6 Miss Worlds, 7 Miss Universes, 6 Miss Internationals and 2 Miss Earths so far has now become obsessive in winning the title. With all those hair-raising news revealed, has Venezuela gone too far to win the Miss World Pageant? Let’s find out!

First of all, our hearty congratulations to Miss South Africa, Rolene Strauss, on winning the 2014 Miss World pageant at the Excel London ICC Auditorium on Sunday. While such pageants bring honor and pride to their countries, lately it has become a tug-of-war for thousands of obsessed beauty enthusiasts, who have decided to go to any extreme to qualify this glamorous content.

These days, Venezuela is reportedly running ‘beauty factories’, where parents are pushing their daughters as young as 12 to undergo cosmetic surgery in a desperate measure to make them beauty queens.

While these fame-hungry teens are leaving no stones unturned in using the hottest glamor squad of the cosmetic industry; the outcomes have some horrific stories to share especially related to the dangerous trends of butt lifts, nose and lip jobs.

As per the latest reports, more than a dozen teenage girls have died so far when their botched plastic surgeries that include injecting synthetic silicone into their buttocks went wrong. So far, over 40,000 South American women have undergone butt implants, in which a small round gel-like substance known as synthetic biopolymer is injected into their butt cheeks.

While the beauty enthusiasts are desperately getting their butts shot with those synthetic silicones to get their shape right so as to qualify for the pageant, these cutting edge surgeries are actually backfiring. In adverse effects, these synthetic biopolymers are spreading uncontrollably into the upper part of the body, leading to deformities, paralysis and death in the worst case scenarios.

If this isn’t enough then girls aging 16 are not hesitating to cut out part of their intestines to consume less food and are also sewing their tongues with plastic mesh that stops them from eating solid food. Some girls also have a black strap tightly wrapped around her stomach that shrinks their waist to only 25 inches. In a bid to obtain the Barbie-doll look, these fame-hungry teens are only left with nothing but huge disappointment and are forced to pay a heavy price for such fancy cosmetic treatments.

As per Maria Trinidad, a member of NGO No to Biopolymers, Yes to Life,

“Every girl here dreams of being a “Miss”. We Venezuelans see those people as the perfect women. When you live in a country where a beautiful woman has greater career prospects than someone with a strong work ethic and first-class education, you are forced into the mindset that there is nothing more important than beauty.”

Besides, the annual Miss Venezuela contest is the country’s most popular television event, watched by 2/3rds of the nation’s total population. Such a craze and quest for success by girls hailing from poor families have forced establishments of multi-billion beauty factories. And these organizations are assuring these gals to give them the best butts, breasts and waists to qualify for Miss Venezuela contest.

As we speak, at one such academy a nine year old girl is getting injected with hormones that will delay her body’s development, whilst buying time for her legs to grow. Such academies claim that they may not have the world’s most beautiful women, but they do know how to produce beautiful women with perfect body.

And with adverse reactions from butt implants and nose jobs, their dreams not only get shattered but they are both physically and psychologically damaged for their rest of their lives.

Here Is a Fresh Pool Of B-town Magazines To Dip Into!

Fashionlady - February 12, 2017 0
As the month of February started to roll, the new, fresh magazine are springing up and we have a lot more to catch up...