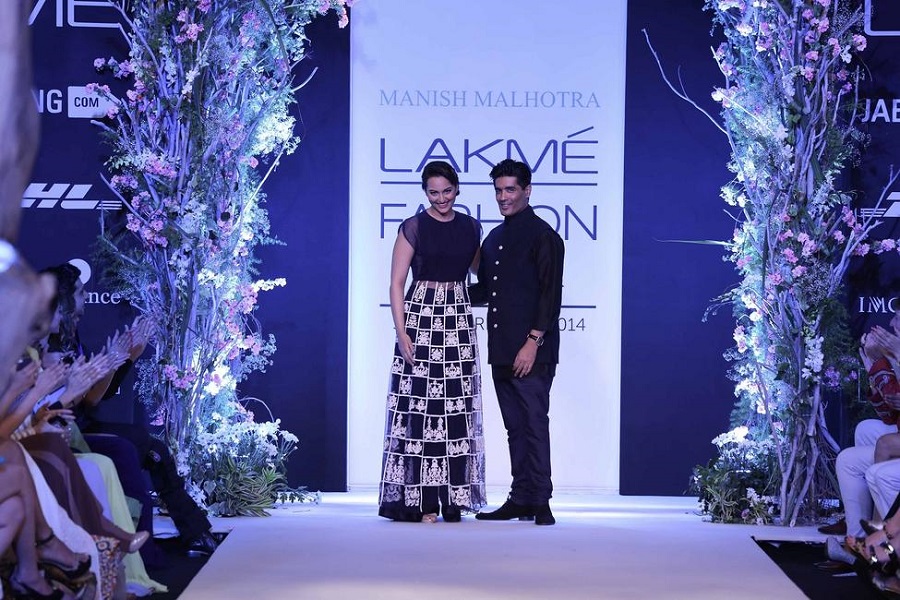 Lakme Fashion Week Summer Resort 2014 kick started with a high drama as day 1 was dominated by none other than the king of Bollywood fashion – Manish Malhotra.

As the red carpet was set with the runway ready, Manish’s ‘Summer Affair’ dramatically transformed the ramp into a whimsical hothouse. The decor of the stage adorned with exotic floral vines and leaves rendered the spring feeling, filling the air wit romance.

This time Manish chose Sonakshi Sinha as his muse as he showcased his ‘Summer Affair’ collection. As per the designer his line is influenced by the romanticism that exists in today’s day and age.

As per the designer,

“Summer 2014 for me is about the feelings and emotions this modern day romance evokes.“ 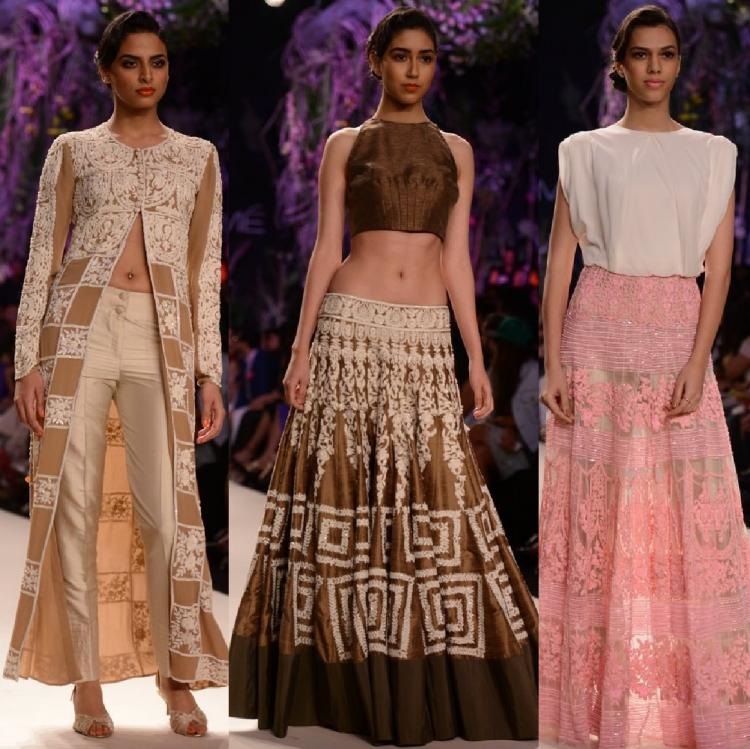 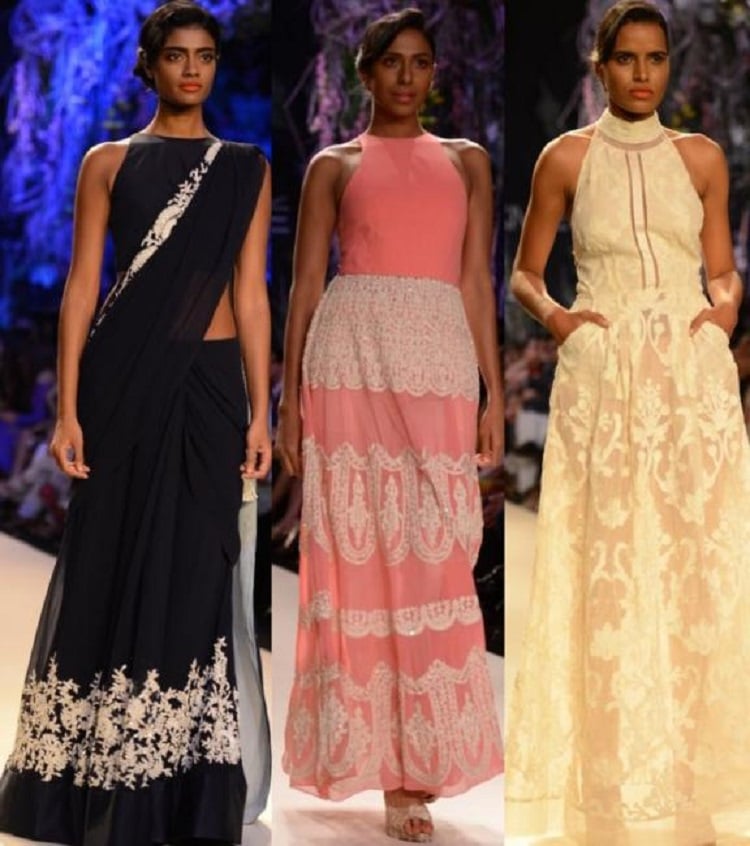 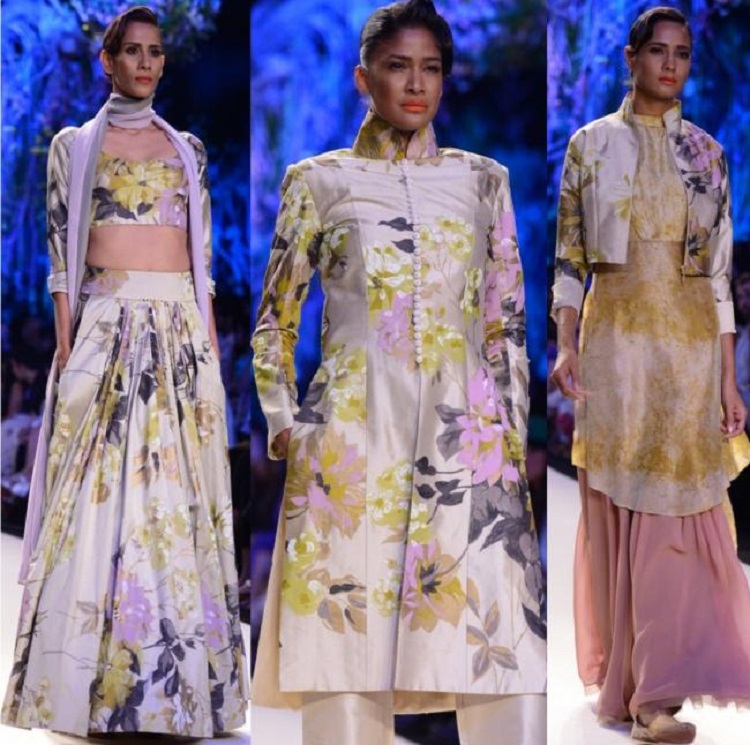 While Nikhil Thampi and GenNext designers opted for pastel shades, the fashion guru incorporated the shades of romance including pink, beige, powder blue and ivory along-with grey and navy accentuated with intricate embroidery.

From dress-styled long kurtis and summer skirt lehengas with pockets to slim pants and zip-embedded saris; his summer collections are a treat for eyes, apt for the new age fashion forwards.

His soft romantic creations confronted edginess when metal and mirror works were also fused into his silhouette numbers. The bottomline was to keep up the feminine element as a tribute to the international women’s day. The best thing I liked about Manish collection is that he has finally replaced his signature outlandish designs with minimalistic and dainty styles.

While Sonakhsi Sinha was his showstopper, his show also saw the likes of Kajol and Kangana Ranaut, Sophie Choudhry and Sonali Bendre.

The audience gave his collection a standing ovation as Sonakshi sizzled the ramp in a midnight blue ensemble at Grand Hyatt, Mumbai on Tuesday night.

Not only did Manish creations were under the spotlight but Sonakshi’s newly acquired svelte figure amazed everyone, as she made a graceful entry in a floor-length sheer midnight dress-inspired kurti flanked by beautiful white embroidery.

When asked about her image makeover, the Dabbang actress credited her consistent workout regime which has contributed to her slimmer frame.

Sonakshi had this to say,

“I started working out in November, 2013 and now in March, the results are showing. I have been consistent throughout. I was also shooting my films but I was also regular with my work-out.”

The men’s collections showcased by Manih featured different textures and prints along-with Indian contemporary jackets. His kurtas got a makeover, while his bandis overruled sherwanis. On the other hand, Jacqueline Fernandez walked the ramp for the couture king, Tarun Tahiliani. She was seen in Tarun’s signature veil as Tarun filled the runway with glamor on day one.

The showstopper, Jacqueline made a graceful entry in a orange-pink hued anarkali with a net dupatta as her veil. The highlight was anyhow the exquisite necklace along-with the earrings designed by the fashion designer.

Celebs who were spotted at LFW Summer Resort 2014 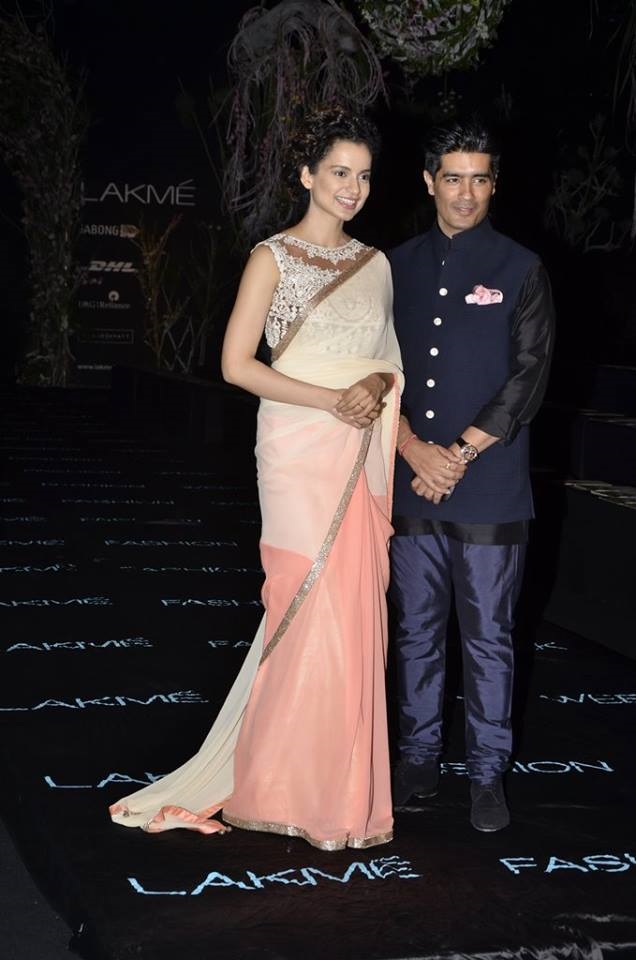 The designer had incorporated shades of mustard, fuchsia, ivory, indigo, black, white and beige colors for his creations, whilst his Reliance jewels of diamond, ruby, pearls and kundan perfectly complemented his silhouettes. 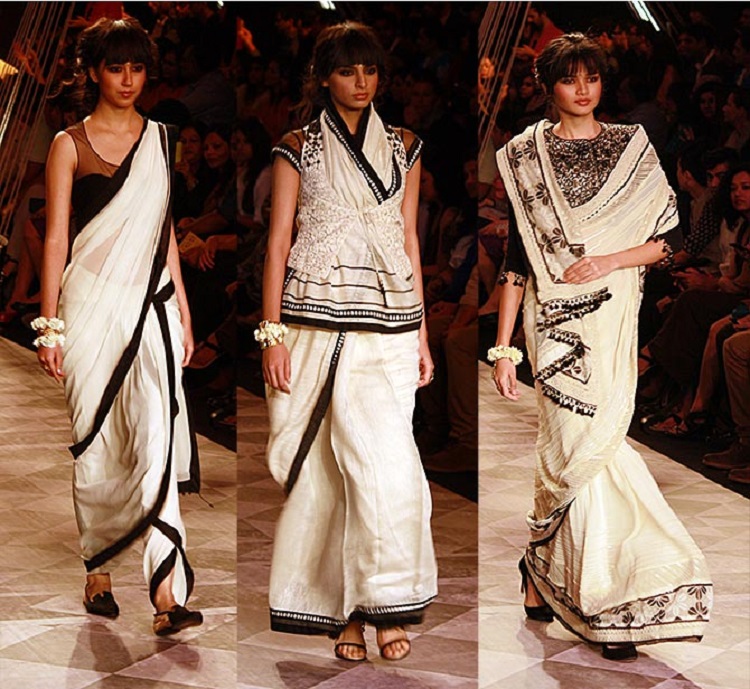 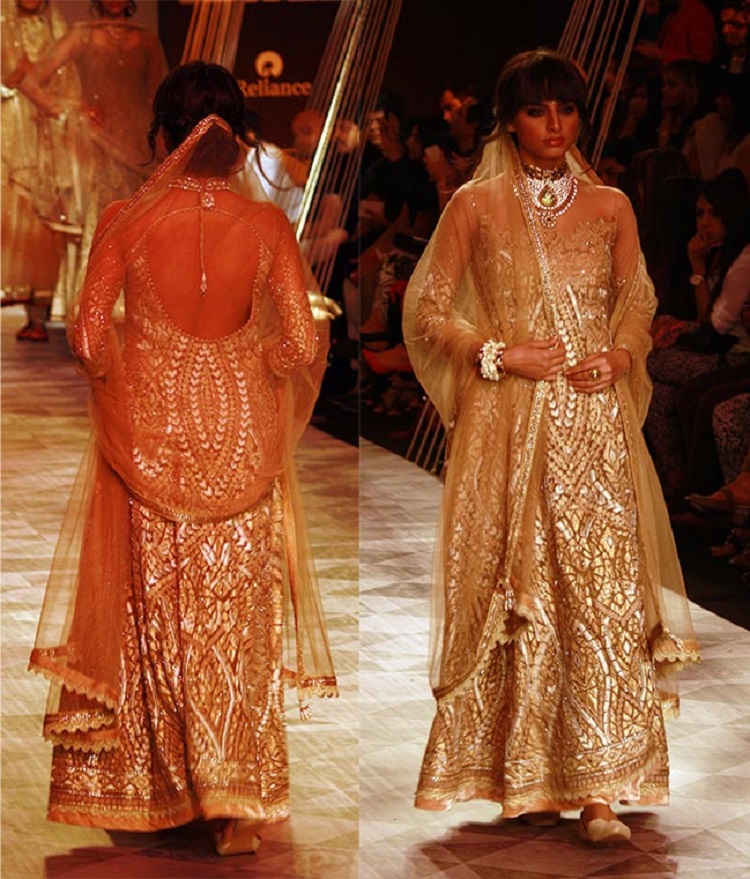 Hope you enjoyed this coverage from Day 1! Stay tuned for more updates!!

Top 10 Best Kajals In India To Enhance Your Beautiful Eyes

Halt And Relish The Escalating Styles Of B-town At The HT...

Are These Celebrities Saying That The Sheer Illusions Are Back?