Pakistani actress Mahira Khan may have been in news lately for all the wrong reasons, but the woman has definitely succeeded in creating a fan base for herself in the country.

Mahira’s introduction with India happened courtesy her daily soap, “Humsafar”, alongside Fawad Khan. With the serial earning an overwhelming response from the Indian audience, in no time the leading pair gained firm ground in the hearts of their Indian fan base.

Courtesy her popularity, Mahira was approached by the who’s who of Bollywood and the woman finally gave in, taking her Bollywood plunge with “Raess”, alongside none other than King Khan himself.

Although disturbances at the border caused Mahira to make a quick exit, rumors are the lady is dating tinsel town’s most eligible bachelor, Ranbir Kapoor.

Having made friends with the Kapoor’s and Khan’s this woman has definitely made it to Bollywood’s most privileged section and we can only hope to see her doing some great work in both the countries.

While her acting skills have been much approved, her worthy personal style is worth mentioning.

The beauty of Mahira Khan lies in her versatility. Be it a red carpet OTT appearance or a casual chic look, Mahira aces it all adding her persona to her outfits. Be it ethnic or street style, her comfort and confidence stand unperturbed.

L’oreal Paris very recently announced Mahira Khan as their ambassador from Pakistan. Just days ago Mahira shot her first ad for the luxe hair care brand carrying three looks ranging from semi-formal to corporate formalities. The woman breathed life into all the three outfits wearing them with much panache. The looks were carefully styled by stylist Maneka Harisinghani.

For the first look, Mahira was styled up monochrome. The woman was dressed in a pair of black vinyl pants and a white oversized blouse from Celine with thin pleats around the button strip. The basics got an instant glamorous lift with a Gucci belt and Black balloon jewelry. A pair of black stilettos rendered perfect finishing touches to her appearance. Her mostly natural face with her tresses let loose naturally added all the charms to this look. 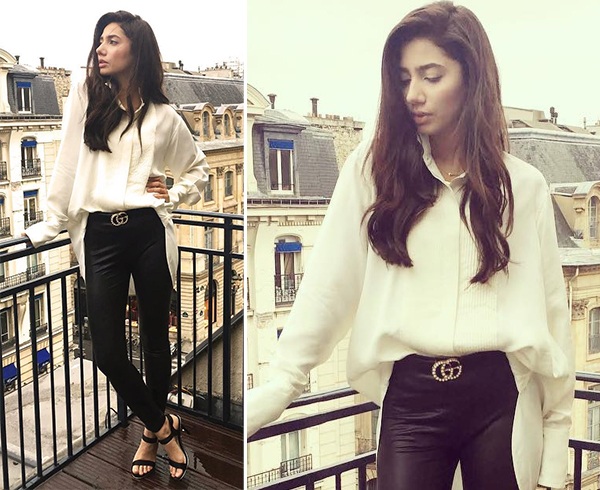 The second look had Mahira wearing romantic laces in a formal setup. Stylist Maneka had her muse wear white lace separates from Burberry. The simple knee length skirt and blouse were instantly upgraded with a staple trench from Burberry. The camel coat layering got all the attention to her burgundy blow-dried tresses that fell naturally on her shoulders. Her natural radiance continues to rule her appearances. The neutral Dior handbag and a pair of nude heels sealed the deal for Mahira Khan. Mahira’s third look for the ad shoot had her don a corporate appearance. The woman suited up chic in a black Carolina Herrera tuxedo. The pairing of a casual white t-shirt with the tux was indeed a smart move by stylist Maneka. Having her tresses rolled up in a bun, Mahira attempted to work a boss lady look and she very well justified the same. Chanel ear studs and a backpack completed her look to the T. 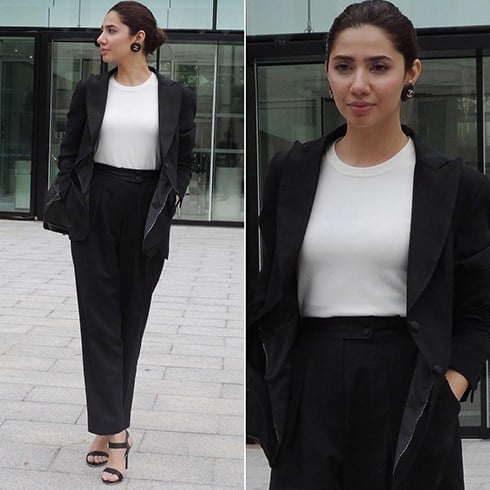 Mahira Khan was announced the best dressed this year at the BIAF awards 2017. In a never seen before red carpet look for Mahira, the lady garnered all the appreciation dressing up in a ball gown from Nicolas Jebran. While shades of grey rendered a more sophisticated feel to her evening look, the floral print added all the charm to her vivacious elegance. For some added sparkle stylist Maneka opted for jewelry pieces from Zoughaib and Co. 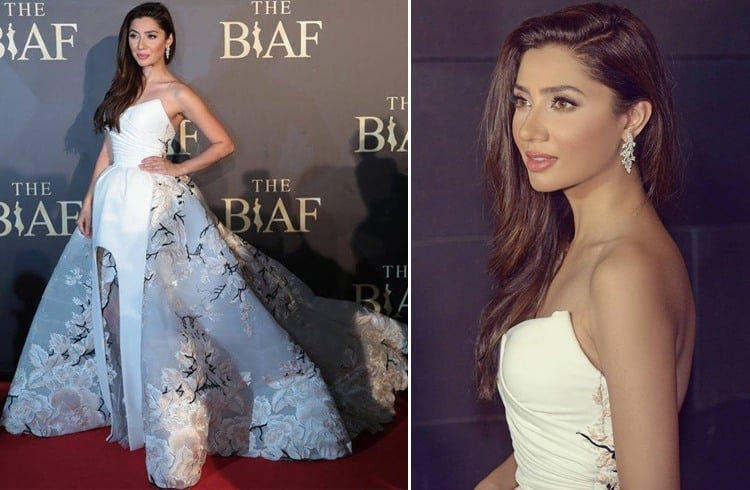 Sonam Kapoor defines the epitome of Indian fashion. With her gut and will Sonam has made a definitive mark for herself as far as her fashion choices is concerned. One of the most fashionable sister pairings, Sonam and Rhea most recently started their brand Rheson. Going straight from Bollywood to Lollywood ( Pakistan’s Movie Industry) was this saree. The printed palazzo saree found just the right bearer in Mahire. Looking absolutely ravishing Mahira justified the look and upgraded on our scorecard wearing it with a pair of boots. At the Lux Style Awards, red carpet this year Mahira Khan was like a spell of black magic. The woman opted for a black full length teasing us with her slight peek-a-boo on the neck. To add on to the glam quotient, the dress was accompanied by gold jewelry pieces. 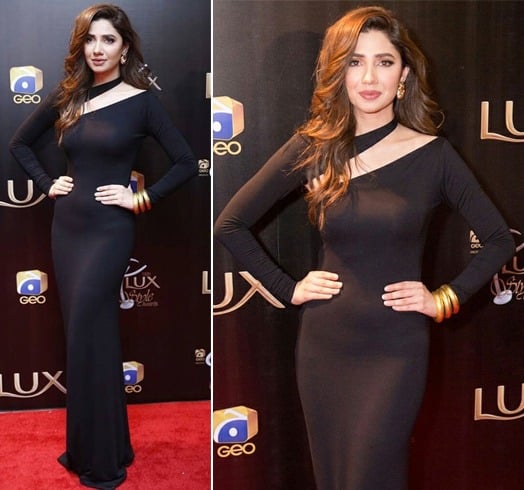 Mahira Khan made the airport her runway wearing a multicolor kaftan from Gulabo. The blend of colors looks absolutely mesmerizing. We liked how Mahira gorgeously colored her jet-setting diaries. 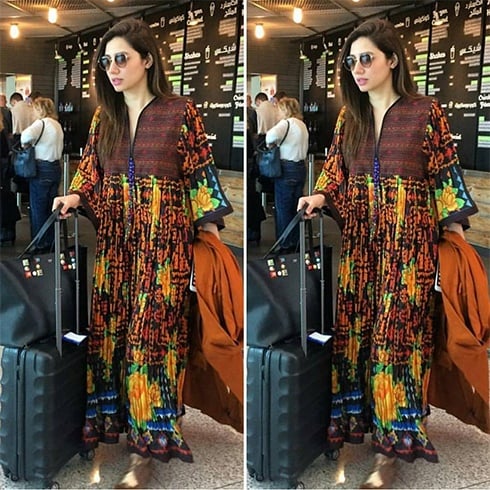 Mahira and Ranbir’s small tete-a-tete in Dubai aroused much flames between the two. The two were attending as ambassadors of their respective nations at the event Global Teacher Prize. For the ceremony, Mahira opted for a ravishing red ensemble from the house of Faraz Manan. While her tresses swept onto one side, complemented her outfit, Mahira’s makeup looked natural and understated. For her second appearance at the Global Teacher Prize ceremony in Dubai, the Pakistani actress donned the color of peace, white. Mahira put up quite a slayer performance wearing a white dress from designer label Avaro Figlio. While the asymmetric pattern looked edgy, the exaggerated sleeves can just not be missed. We loved how the mostly casual and understated Mahira turned all blingy and almost unrecognizable while sparkling out and about on the Women’s Own Magazine. AN interesting portrayal there wearing the gold overdose with dull greys. 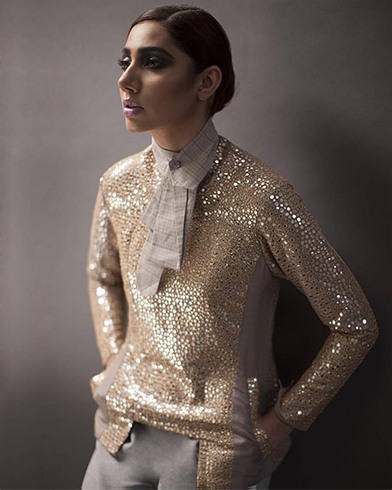 For the cover of the Women’s Own magazine, November issue, Mahira Khan was dressed up in a powerful suit up. Stylist Sumbal Adil dressed up her muse in a Jazib Qamar pantsuit. This girl boss had her attitude on point and wore her dynamism with much panache, an interesting bun and brown brogues. 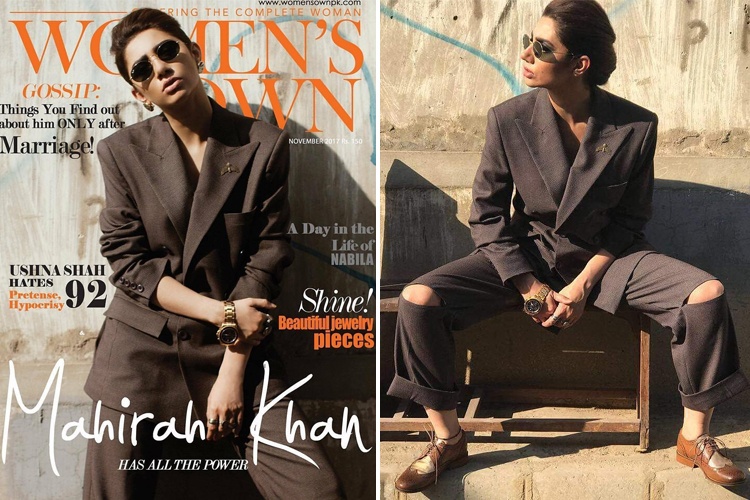 With an increasing fan following and an equally increasing score on our fashion scorecard, Mahira Khan is definitely among the top few on our watch list.

How To Bleach Jeans To Give It A Quick Fashion Upgrade

Water Fasting: Are you Up For It?

Great Outfits Ideas for Your Loafers