Indian Fashion Blog
Home Events Here Are Our Picks For The Best Dressed Celebs At The 90th... The stars of Hollywood have walked the red carpet today at the Academy Awards which has proved itself to be fashion’s biggest night – hands down. What we witnessed on the red carpet today were some of the fashion standouts our eyes have been caving all this years. From Nicole Kidman to Lupita Nyong’o – the list is long, so why the wait? Here are our 10 picks of best dressed celebs at the Oscars 2018.

Let’s start with the most controversial dress of the evening, the electric blue frock. Armani Prive number was inaugurated with a deep sweetheart neckline and what followed what total fantasy. The waistline featured a bow – a very big bow, and that gave way to a never ending slit. Talk about sexy, people. The actress’s Christian Louboutin shoes matched the occasion and Harry Winston jewels completed the look with perfection. The veteran actress was seen in a crimson Christian Dior Haute Couture – a lot of fabric and a deep V at the neckline. She opted for Stuart Weitzman shoes and picked a Christian Louboutin clutch to accompany her to the event. Fred Leighton jewelry brought in just the right amount of bling to the look. This young diva never disappoints and keeps taking the fashion bar higher and higher with every appearance. For her Oscars look, Zendaya settled for a Giambattista Valli‎ Haute Couture and matched her dress with shoed by Brian Atwood. The single sleeved ruffled number was accessorized with Bulgari jewelry. But the star of the show was that commanding top knot. 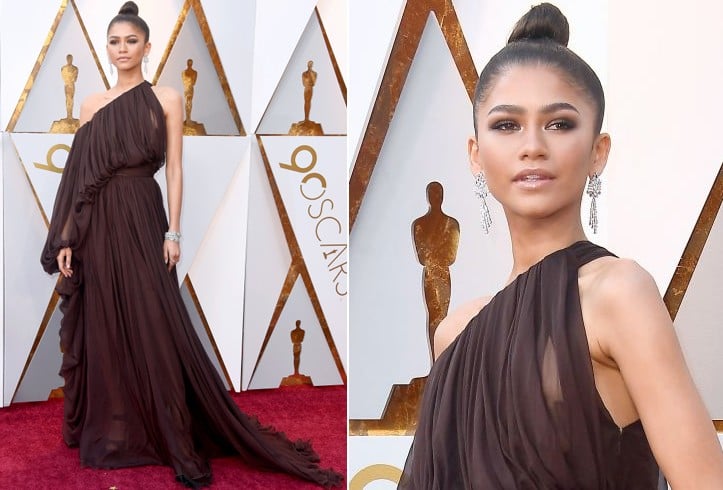 The 35 year old Kenyan Mexican actress is who everyone was talking about this night, while others get swooned by her Oscar’s speech, we focus on her Oscar’s style. The custom Atelier Versace in gold sat perfectly on her glowing skin. To walk the carpet, she slipped in into a pair of Alexandre Birman shoes. The phone must have found a home in her Versace clutch while Niwaka jewelry added a couple of more blings.

Hollywood waits for J Law’s Oscar’s look, year on year, though everyone knows she would pick Christian Dior anyway. For this year too, the actress called for her favorite designer and ringed in this gunmetal number. She opted for minimum jewelry, wore a bright face of make-up and kept the blond curls down in beachy waves that we totally love. Oh that contagious smile! While all stars are serious and pouty at the carpet, leave it to our girl Sally to bring all the smiles. For her look at the Academy Awards, she trusted in Armani Privé. The conservative gown had a casual fit but did cinch in at the waist with a tiny belt. The already glimmering dressed got a little added bling from Chopard Jewelry. We love how she wore her hair up. The English-American actress-singer pulled an Elsa at the Academy Awards’ red carpet. Her powder blue floor sweeping tulle couture by Schiaparelli Haute transitioned her into our favorite Disney princess. We are in awe of the embellishments that run across the high-neck bodice. Though the appearance didn’t call for any, we are not particularly mad at the amount of shine added by Chopard rocks. In a crisp white Chanel Haute Couture, the Suicide Squad actress looked like an award of sorts herself. She could be the Oscars statue if the color of her dress was gold – but we are loving the white, nevertheless. A blingy little clutch and a bob framing her face rounded off the look. 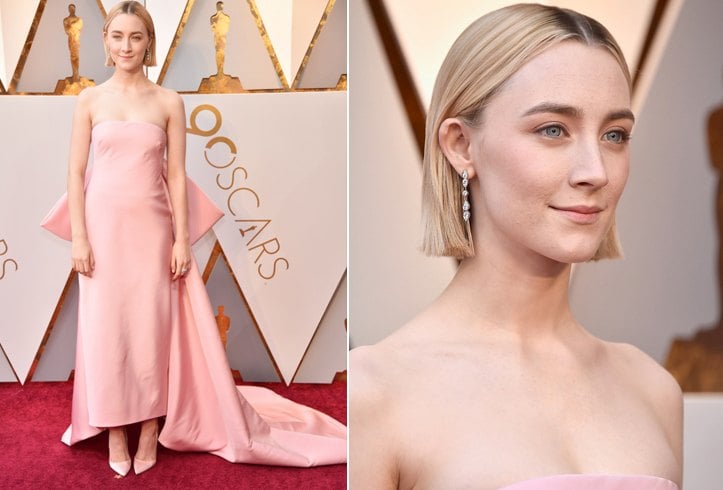 These were our picks of the Oscar’s night. Did we cover your favorite look? Do share your thought at the comment section below and keep an eye on this space to stay updated with everything that’s fashion Hollywood.

How To Become A Fashion Stylist – Your A-Z Guide

The Victoria’s Secret Fashion Show 2016 Was One Big Party On...

Check Out The 3 Divas Who Made The Lonely Planet Travel...

Drumrolls! FDCI India Couture Week, 2016 Is About To Begin!

Fashionlady - July 15, 2016 0
Here’s addressing to all the Fashion Followers across the nation. The month of festivities is about to begin. With Designers ready to unveil their Festive...