With summers bidding us adieu, it’s officially a wrap for ponytails and rolled up hair updos. But looks like tinsel town fashionistas are not done yet with this chic summer hairstyle.

Adding more power to their pantsuits, rendering much cool to the sarees and amping up the glam quotient of their one-pieces, the B-Town brigade is wilfully pairing all their outfits with this hair updo.

Slick back, side-parted or casual, tresses pulled back into ponytails are looking all forms of chic. We are all hearts for the ease with which our divas have transitioned this summer staple for into their winter appearances almost effortlessly.

If you are not ready to accept it, then you may sit back and be rendered outdated. For all the rest of our lovelies, scroll down for some major inspiration to carry the most popular hairstyle this season.

Deepika is leading this ponytail loving bandwagon. For most of her latest sightings in her run up to Padmavati release, Bollywood’s leading lady is taking the Ponytail plunge.

Her Padmavati promotional schedule most recently took the diva to the Super Dancer 2 show. Stylist Shaleena Nathani dressed her muse well in a golden Raw Mango saree and regal jewelry pieces from Tanishq. To ensure utmost attention to the exquisite jewelry,along with a chic appearance hair stylist Daniel Bauer had her tresses pulled back in a ponytail. For a yet another promotional look, Deepika opted to carry a ponytail. This time a mid parted slightly twirled from the sides version added more stars to this starlets appearance. The pony played perfect finisher to her fuschia meets magenta outfit from ace designer Prabal Gurung. As much as we love the outfit, we are in complete agreement of the ponytail adding its own persona to the look. Hairstylist Daniel Bauer. 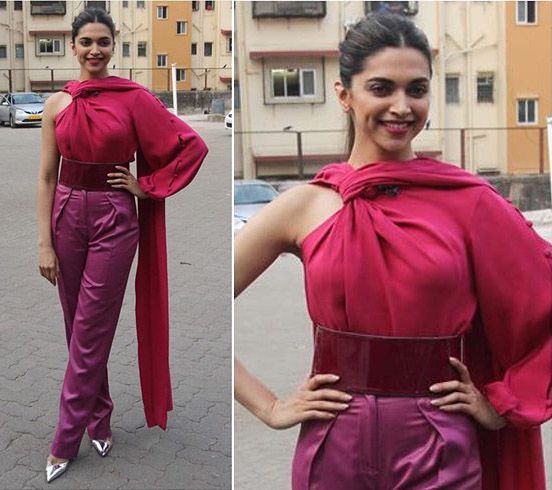 Deepika and Sabyasachi are equal to deadly. The woman dressed to kill for the GQ Fashion Night,2017. Way ahead of her peers, Deepika was undoubtedly the best dressed at the soiree. We love that power zing the ponytail hairdo added to her black saree look making it more than perfect. The side-parted pony hair updo was courtesy hair stylist Yianni Tsapatori. Bravo! 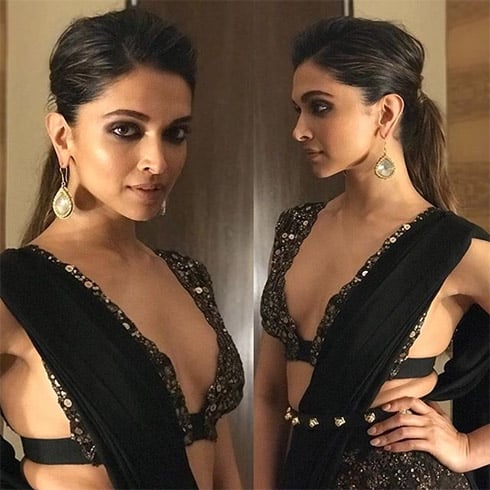 For the Mazza Gold event, Samantha Prabhu was styled up in a matte gold Amit Agarwal skirt and Purple Paisley top. To add more charms to this all gold look put together by stylist Ami Patel, professional celebrity hairstylist Chakrapu Madhu, had Samantha’s locks pulled back in a neat side-parted ponytail. 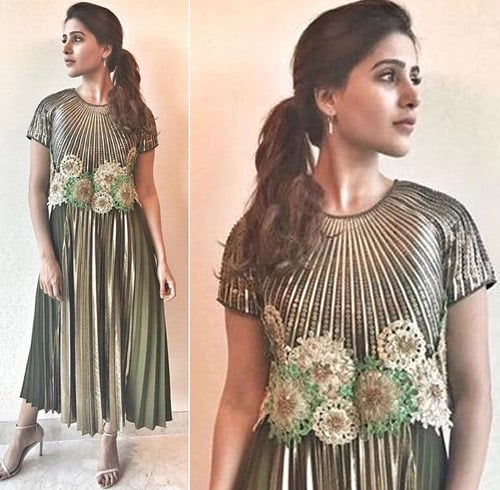 The energy quotient at the Entertainment Ki Raat stage soared when actress Neha Dhupia made a power-packed appearance, all suited up in bright fuchsia. Now, this is manning up better than men. We loved that Lavish Alice wrap pantsuit. To complement her bold meets beautiful outfit, hair stylist Venus Ferreira rendered a ponytail hair updo, having her hair back combed and casually pulled slightly up from the center. At the Lokmat Awards red carpet this year, Bollywood’s cutie-pie, Alia Bhatt rocked a ponytail with her skirt and shirt look. Stylist Ami Patel had her muse dress up in ivory ethnics, a long skirt and crop bell sleeve blouse, from Abu Jani and Sandeep Khosla. Her all-white look took to next level courtesy her hair updo, which was a chic scrunchy ponytail. In the first look, Sania resorted to a striped monochrome pantsuit from Masala Chai, Dubai. The blazer and flared pants were worn with a white vest insert and a bright red LV sling. The overall look got an instant upgrade with her hair bunched up in a ponytail. Side fringes kept the look casual. At the Indian Sports Honour Awards hosted most recently in collaboration with cricketer Virat Kohli, the Indian tennis star turned flamboyant side up wearing a mighty metallic suit from Topshop. the silver glazed pantsuit was worn with a black v-neck tee and a ponytail. With hair strands falling out from the sides, this look was nothing short of a rockstar chic. 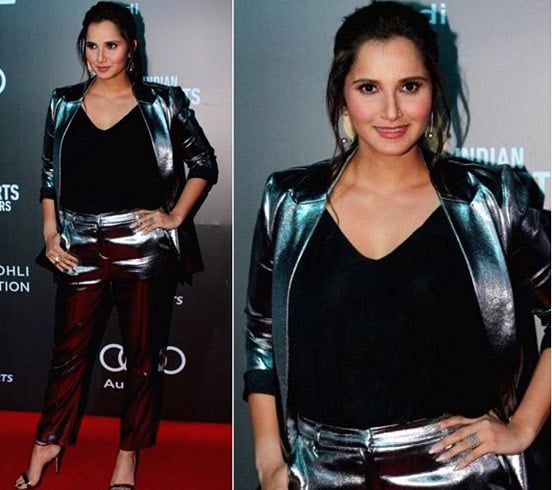 Shilpa Shetty has been rocking the Super Dancer 2 show with her dress up. For the last weekend, Shilpa decked up pretty in lehenga separates from Tarun Tahiliani. To complete her look styled by Ami Patel to the T, hair stylist Sheetal F.Khan gave a ponytail look to Shilpa. Mid-parted with slight puffs on both the sides went well with her lehenga outfit. Now we would not have thought of carrying a pony with lehengas too. Your cue there ladies. Suit up plus ponytail has become the key to dressing up powerful. Last years slick back ponytails have been altered to their more natural looks but the impact continues to be equally strong. For her emerald pantsuit from Ohaila Khan, stylist Sanjana Batra had her manes tied up in a slightly high ponytail. 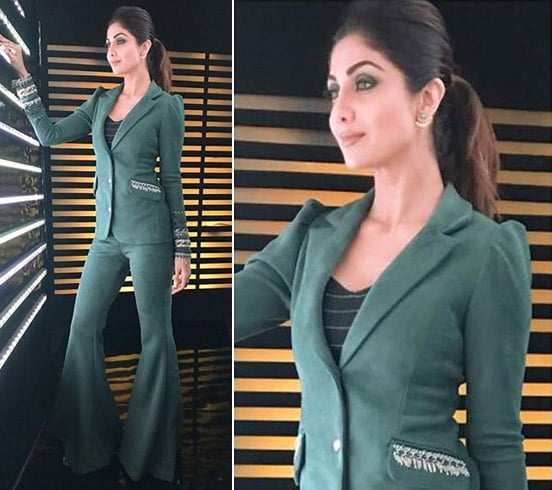 Burning the Entertainment ki Raat stage, was Mouni’s hot silver-white appearance. The pretty face dressed up well in a one-shoulder silver top that boasted of an extended sash with a monochrome plaid skirt. Credits to stylist Ankita Patel for putting together this rockstar look. Playing perfect finisher were Mouni’s jet black hair knotted up in a slick low pony with two strands picked out neatly. Hairstylist Queensly Chettiar was the woman behind Mouni’s manes. 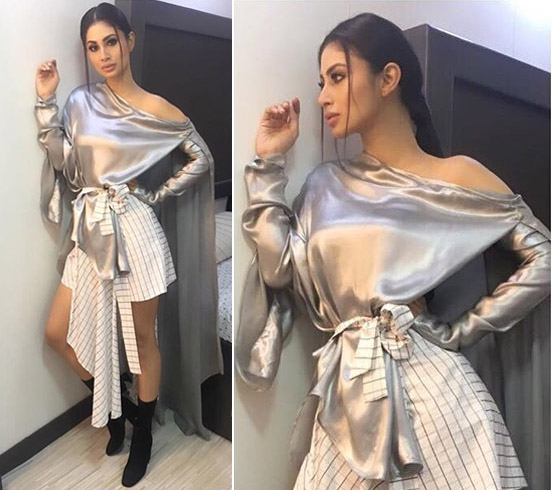 Spotted at a recent photoshoot for Hello Magazine, actress and model, Sayami Kher’s flat ponytail’s were goals. Celebrity hairstylist Anu Kaushik gave a hearty makeover to Sayami’s ott curls ironing the top to make a pretty, flat top curled edge ponytail. Giving more definition to her Indian face, this pony hair updo was a master stroke. The first look had the lady wear the pony with her midnight blue lehenga and blouse look from Dabiri Couture. For the second look, the multi-fabric sherwani kurta and pencil pants from Dabiri Couture got an instant upgrade courtesy the pony style hairdo. 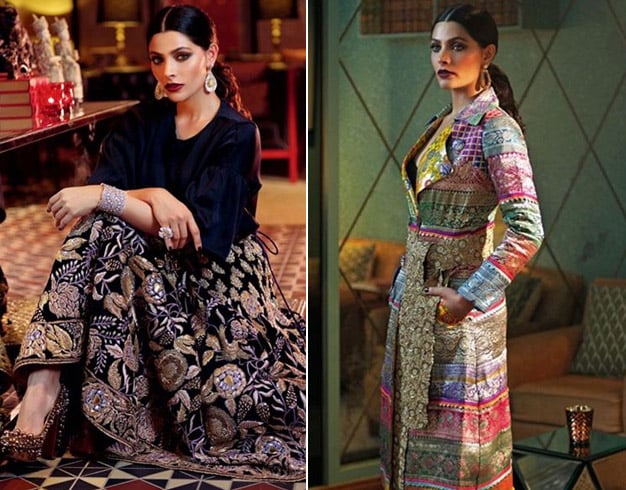 With some major goal setting there, we are off to discover the ponytail hair updo that is meant for us. In hopes that this weekend we too like our tinsel town, divas will make a power-packed ponytail appearance.

Different Ways On How To Use Concealer

How To Prepone Or Postpone Your Periods? Simple Home Remedies