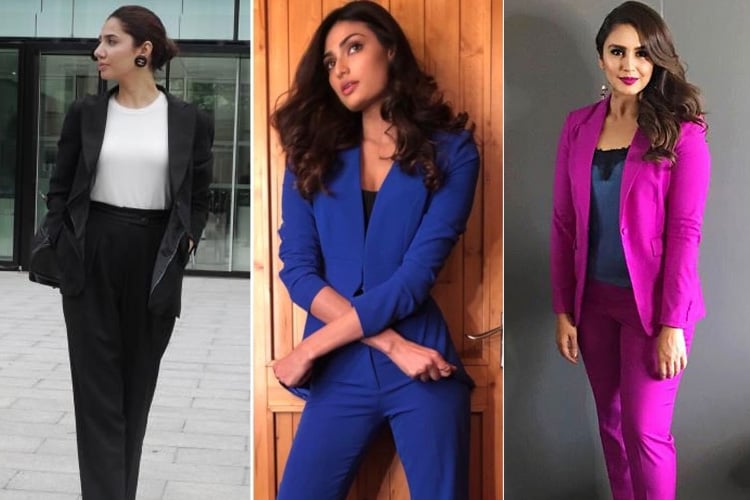 Feminism is in the air and looks like our fashionistas from B-town are onto making a point on behalf of the pretty part of the society.

A display of authority is in complete sync with some power dressup, and that is exactly what the divas are embracing currently.

Strong, bold and invincible is the tone governing the closets of the babes from Bollywood. Giving us back to back power packed suit up performances, the fashion flag bearers have almost made it a mandate to carry a legendary suit up this season.

That added blazer is functional too considering a slight nip in temperatures across the country.

Wearing their armour in pretty cuts, drapes and not to forget bright colours, the starlets have pulled out the traditional suit from a formal setup and are wearing their more younger and lighter versions. Right from the red carpet to promotions suits are making an appearance almost everywhere.

Let’s take a quick look at all the pantsuits that caught our attention most recently. This season though solid color suit ups were clear winners.

Power met angelic in Disha Patani’s pristine white suit up at the Young Achievers Award night in Delhi most recently. The woman was in attendance to receive her award for The Fresh Face Of The Year. For her special evening, stylist Tanya Ghavri dressed up in a statement pantsuit from the house of contemporary designer, Nikhil Thampi. Clean cuts, a dash of delicacy with that lace insert and the one button regular fit blazer looked everything neat and nice. A suit up well carried by the Dhoni fame Disha. The flawless suit up went for an instant upgrade with accessories from Nikhil Thampi and a box clutch from Wear Crimson. It’s been just about a year that Kareena delivered baby Taimur, and Bollywood’s begum, Kareena Kapoor Khan is back in shape exuding her usual radiance. The woman wore the boss look most terrifically. Drifting from her usual casual dress up’s, Kareena donned a pantsuit for a certain ad shoot. We heart everything about this Ritika Bharwani suit up. The rich marsala tone on a fine and most importantly well-tailored suit had Kareena look hot while bossing around. The long blazer with clean cuts was worn with high waist straight pants. The black insert added some contrast play. Stylist Rhea Kapoor had Kareena wear the suit up with a bun and a pair of diamond solitaires. At the party hosted by Farah Khan, long-legged lass, Athiya Shetty made for a power packed appearance. Suited up in a monochrome blue suit from the label Dejana Lukicc, Athiya exuded absolute cool vibes. The solid color suit with a pair of flared trousers had her already long legs, look even longer. The short blazer complemented her toned torso and was worn over a black insert. Stylist Ami Patel opted for no accessories add-ons. Having her tresses fall naturally on her shoulder and a slightly contoured face, Athiya made for a chic spotting. 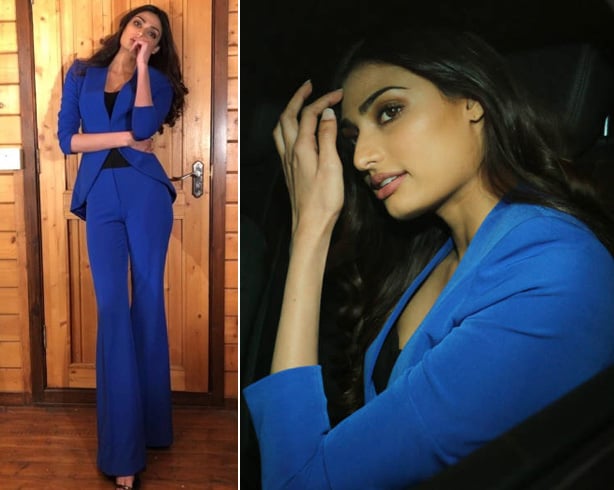 Malaika Arora is one boss lady and when suited up she definitely makes for a legendary appearance. Spotted on the set of The Runway Project, Malaika looked hot and much in command wearing a pantsuit. Stylist Maneka Harisinghani dressed up her muse in an all black suit from the house of designer duo Ashish N Soni. The short blazer coupled with a casual wide legged trouser looked casual chic. We loved that no insert look which the woman carried with much panache. The vintage golden rose brooch from Viange took her suit up a notch higher. Malaika ruled her look sealing it with a low ponytail and a glossy plum pout. 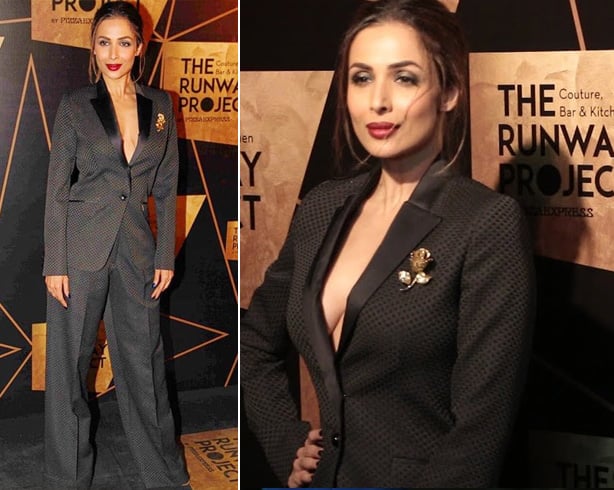 Shilpa Shetty loves to experiment when it comes to fashion. An avid risk taker, her experiments often work in her favour. To attend a FICCI event, Shilpa opted to suit up rather unconventionally in a grey Ashish N Soni suit. Stylist Mohit Rai paired the one arm blazer with a sleeveless bow tie white shirt from BCBGMaxazria. The woman sealed her suit up to the T, with a pair of neutral Louboutins and a statement black Cartier watch. 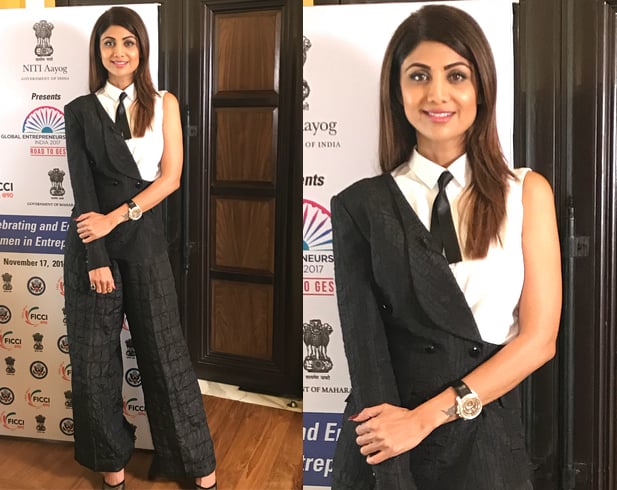 At the Vancouver International South Asian Film Festival, actress Huma Qureshi struck lightning wearing a bright fuschia suit from H&M. Aiming to turn heads at the press call, stylist Sanjana Batra had her muse wear this piece of brightness with a midnight blue insert with a pretty lace detail neckline and a pair of black heels from Gianvito Rossi. To add some sparkle Sanjana picked up a pair of earrings from Isharya. Huma sealed this look with her tresses falling naturally and a pink pout. 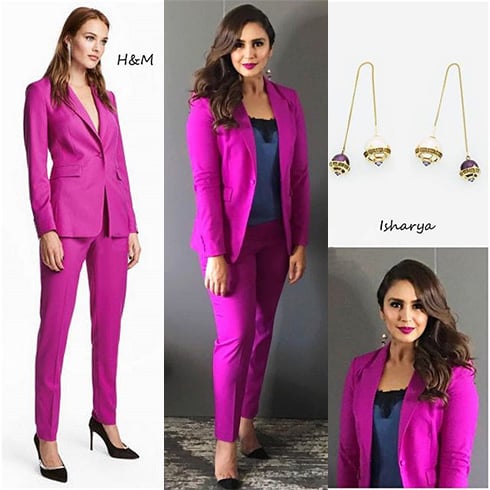 Neha opted for a power dress up for the screening of Tumhari Sulu. Completely justifying her boss lady character in the movie, we liked Neha’s pick for the screening. The pretty pink overlap suit up from Lavish Alice complemented Neha’s framework keeping the power aspect much intact. For some extra shine, Neha opted for Swarovski jewellery pieces. Completing her look with a neat bun and a pair of black heels, Neha did a pretty good job. 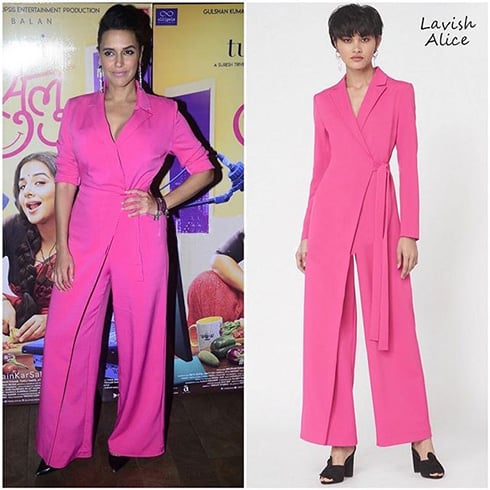 For her appearance at the Vogue BFF’s, Neha opted for a yet another suit in warm marsala from Zara. The mid-length blazer worn with flared trousers and deep grey tee looked good on Neha. Stylist Anaita Shroff Adajania styled up the suit the minimalistic way. Hair let loose and kohled eyes completed her man up. 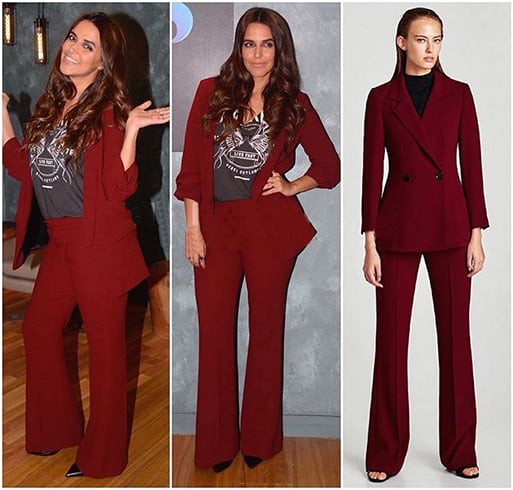 The newly announced ambassador of L’oreal Paris from Pakistan, Mahira Khan was spotted in a boss look for the brand’s shoot in Paris. Decked up in a black Carolina Herrera suit, Mahira looked upscale and sophisticated. The slightly broad lapel and pleated crop trouser rendered the suit up a certain relaxed feel. Stylist Maneka Harisinghani had Mahira wear the suit with a white round neck tee, a pair of statement Chanel studs and black heels. We hope you take your cue and dress up powerful. More power to women!

Buns Are The New BFF’s Of Bollywood A-Listers