Looks like Priyanka Chopra aka Piggy Chops is in the limelight for all the right reasons nowadays! After becoming the face of Guess and bestowed the title of having the “Sexiest back in Bollywood”, she has now been voted as “Maxim India’s Hottest Woman of 2013”.

With the year coming to an end, Maxim India brought out a list of 100 hottest celebs and the cover story has Priyanka Chopra as the numero uno hottie! The cover picture has Priyanka Chopra in a revealing, low-cut white shits with coral pink lips and dark eye make-up. 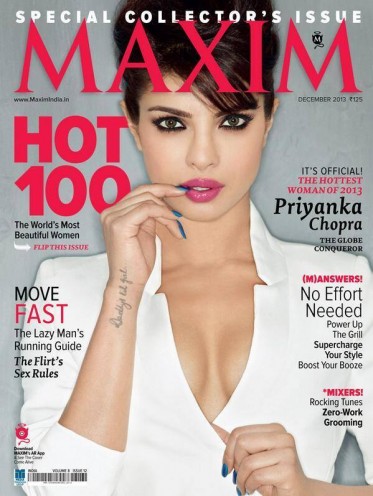 She did a special photo shoot for the magazine where she looked astoundingly hot and set fire on the pages! The photo-shoot featured Priyanka in a bold avataar where she shattered inhibitions by unbuttoning and doing a seductive cleavage show. Check out the Maxim India edition to see her latest photo shoots featuring these outfits:

With her thick kohl lined eyes, she looked drop dead gorgeous in a pink corset style bra, satin blue pants and high gold colored heels. Her coral pink lips and kohl-eyeliner highlighted eyes are definitely a killer combination. She even sported a tight, little black number with a puffed hairdo and black heels.

Another look was where she went all white with a gold buttoned blazer and designer hot pants.

Also voted for having the sexiest back in Bollywood, we definitely do agree with her ardent fans. Here are some moments where this ultra glam diva flaunted her bare back in style. Whether it be backless cholis or alluring gowns revealing her back, she has done it all with elan. Here are some instances where she sported the backless look and stole our hearts:

At Lakme Fashion week, when she wore a lovely chiffon saree with a tied back blouse designed by Manish Malhotra. 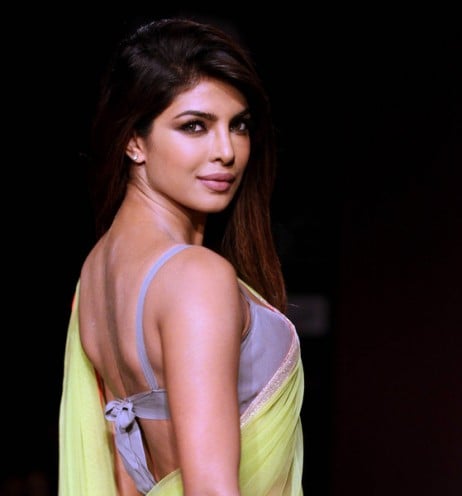 In this gorgeous red gown, Priyanka Chopra flaunted her flawless back while she attended the BIG Star Entertainment Awards 2012. 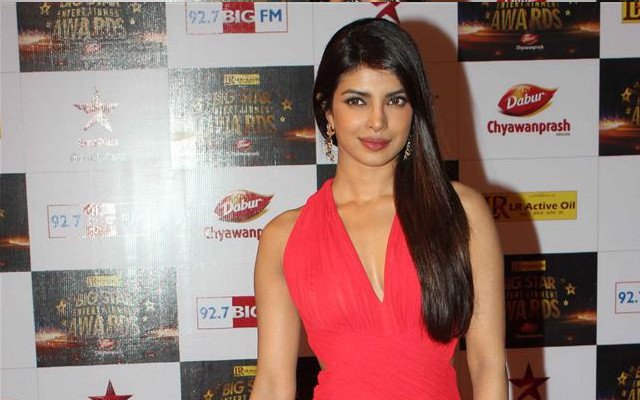 With her growing importance in the international scenario and flourishing movie career, she is perhaps one of the most popular actresses in Bollywood. Her recent appearance in the song ‘Ram Chahe” from Ramleela caused quite a stir owing to her raunchy outfits and choreography. We wonder why would an actress of such caliber get into such item numbers? She has landed meaty projects and her upcoming movies are promising. She is doing a biopic on Indian boxer Mary Kom and has begun to train under expert guide Sameer Johal..Priyanka Chopra also has a movie with Imran Khan which is being directed by Tigmanshu Dhulia. It is slated for release in 2014.

Her most upcoming and awaited project is “Gunday’ starring Arjun Kapoor and Ranveer Singh. She is playing the role of a quiet Bengali girl in the movie and also has an opening item dance number with feathers and a bobbed hairdo.

We eagerly await to see her upcoming movies and performances!

Scandinavian Fashion: What You Need To Know About This Street Style

Fashionlady - February 27, 2018 0
Be it everyday life or fashion, monotony can get absolutely boring. A twist in the tale is what spices up the mind, style, and...