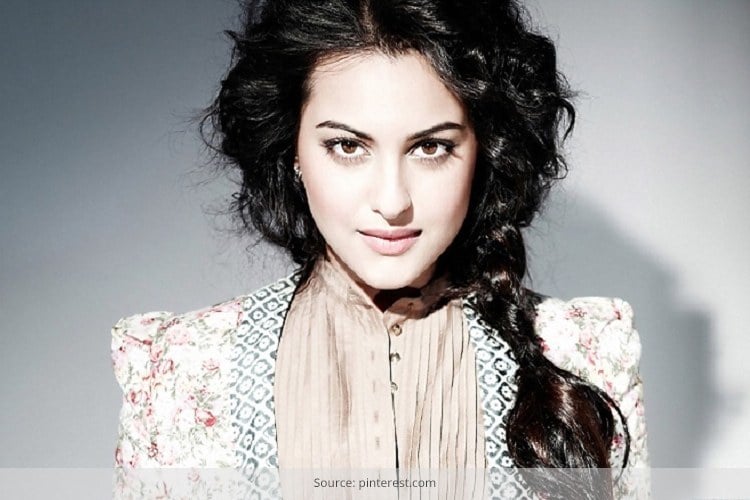 Sonakshi Sinha, the home-grown actress who is on a wave of professional good fortune these days, is also riding high on fashion these days. Forthrightly confident, reservedly shy and easy-going, this quintessential Bollywood actress is already basking in the glory of her recent releases.

Unlike other actors, this girl is excruciatingly punctual. She is always the first one to be seen on the set, ready even before the spotlight boys have set-up. She is someone who quickly learns from her mistakes. With all being said and passed about her fashion faux pass, she is now determined to leave no room for gossip atleast on her fashion take.

During one of her recent magazine photo shoots, she appeared in an indigo skinny jeans, fitted tee paired with a black leather jacket. She accessorized her look with a hint of lipstick and reflector shades, which complete her biker look.

She now looks slimmer than she looked in her movie Lootera. Her stomach has become enviably flat with tones arms and cheeks. She confesses that her figure is curvy yet voluptuous and she always has ons and offs with her weight. No matter what her face is as captivating as her smile and coffee brown eyes.

Standing 5-feet and 8-inch tall, the actress is comfortable in her own skin. She maintains that since she is a Gemini, so it’s obvious to catch two sides of her persona. On one hand, she is shy and composed, while she also surprises people around with her with her quirky attitude. Same is also seen in her selection of movies and the way she adopts fashion.

The Lootera was a dream role for her. Even though many people advised her not to sign the film, as the character demanded a more mature actress, she took on the challenge only to savor the success which she got post release.

On the other hand, she also has some blockbuster masala movies in her satchel, such as Dabang series, Rowdy Rathore and the recently released Once Upon a Time in Mumbai Dobara.

Post her Lootera success, there are numerous online stores who are now selling Sonakshi Sinha’s looks from the movie Lootera.

It seems she has now mastered the art of being a fashionista. When she appeared in a Forever 21 lace motto jacket and Louis Vuitton skirt, she stunned the crowd in Dubai. Even though she looks graceful and sensual in traditional attires, she can even carry the western outfits elegantly, provided she chooses her fashion designer carefully when it comes to donning gowns and LBDs.

I have always found Sonakshi different from the actresses of the current generation. She has the essence of the Indianness, which has painstakingly faded from Bollywood.

Don’t you get reminded of Rekha, Reena Roy and yester year’s actresses when you see Sonakshi on-screen? And with her preference to Desi look mostly in salwar kameez and sarees, it even forces me more to compare her with the bygone Bollywood era fashion fads.

There has already been so many speculations about Sonakshi Sinha being the daughter of Reena Roy, with that being said you just cannot ignore the fact that Sonakshi is blessed with some kind of raw beauty which is now rarely seen and I doubt if it can be adopted.

Check Out The Celebs Fashion Fervor At IFFI 2018 Closing Event

Secrets On How To Find The Right Mascara For Your Lashes,...

Fashionlady - November 15, 2014 1
“Elegance is the only beauty that never fades” – Audery Hepburn Audrey Hepburn’s style and elegance continues to inspire designers to this day. She was...