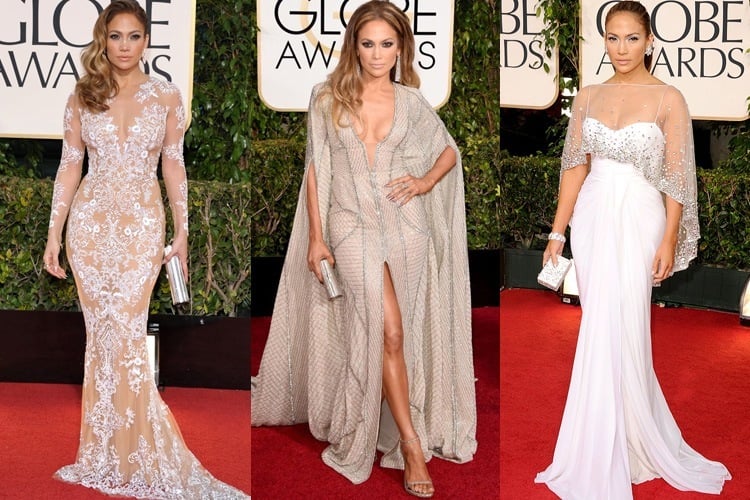 The red carpet of the Golden Globes have witnessed the most exuberant style evolutions taking shape down the years. With the turn of every decade a major revolution hits the fashion world and dusts off the obsolete. Let’s see how the style at the most stylish carpet in Hollywood evolved when the 2000s merged with the 2010s.

The 36-year-old actress welcomed the decade and walked the Golden Globe red carpet in 2011 dressed in this marvelous Marchesa teal gown. The floor length single sleeved dress was sculpted to her body and boasted a laser cut scallop. To accessorize the look, The Fighter star slipped into Brian Atwood‘s black suede Wagner pumps and rocked some rich Cartier jewelry.

A couple of years later, in 2013, Amy stunned the shutterbugs in this Marchesa gown. The hue of the off shoulder ensemble was created to match Amy’s flawless pale skin tone. The drop earrings defined her face and the hair stylist deserves a shout out for coming up with the one sided wavy do.

The America Hustle actor matched her Valentino gown to the carpet of the Golden Globes award in 2014. The halter neckline was an accessory in itself and didn’t really need that barely there ling neck chain. The up do hair helped her stand out as one of the sexiest appearances on the carpet of the event.

The 41-year-old actress kept the glam factor at the 2016 Golden Globes simple. The splendid evening saw her red tresses arranged in loose waves. Amy picked up a bright orange Atelier Versace dress for the event. Her Neil Lane jewelry brought in the bling and what else but a pair of Jimmy Choo would do justice to those feet.

Year 2013 saw Eva Longoria in black legacy. This dress was dramatic in just so many levels. The super graceful chiffon prom dress styled Emilio Pucci gown sported a never-ending slit that displayed her legs to the best. While the lacey upper half had a front hinting a little key hole, the cross over back showed us the biggest key hole in the history of fashion. Eva paired the look with Martin Katz jewels.

The Texan beauty showed some dangerous curves at the Golden Globe 2016. Newly engaged this year, she walked into Beverly Hills in a white princess dress adorned with floral patterns embroidered and a long trail that gave her a mermaid look. But the best accessory that she flashed this evening was her engagement ring.

Nominated for best actress for her performance in Winter’s Bone, Jennifer rocked the red carpet in 2011 like a seasoned veteran. The ruffled Louis Vuitton gown with a knee high slit might have looked a little too heavy. The actress managed to shine out with her 23-carat emerald earrings from Chopard. Roger Vivier heels gave her all the height she needed and the Judith Leiber clutch was made to match her outfit.

The 22-year-old J.Law was a lot more toned down as compared to her earlier appearances in the Golden Globe 2013. She sported a red-hot Dior gown with a well-defined bodice and a black belt for accessory.

Having emerged as America’s sweetheart, the “American Hustle” actress somehow became the muse to numerous memes for the wardrobe choice at the 2014 Golden Globes. While she kept her loyalties towards Dior, the strapless white number gripped with black bands was the farthest thing from intricate. Even the rocks on her wrist and ears couldn’t save the night for Jennifer.

She did maintain her love for Dior but having taken lessons from the 2014 massacre, the Hunger Games star arrived at the Beverly Hilton Hotel for the Golden Globes 2016 dressed in a tremendous coral floor length. The strategically placed cut outs gave a peep of those abs. The star of the show, however, was the immaculate multi-strand diamond choker. Jennifer Lopez is mostly a diva, but on the red carpet of 2011 she rolled up looking like an angel. The white dress she picked up from Zuhair Murad Spring 2011 didn’t fail to put those legs at full front and the sheer paneling at the top worked for the wings missing from her body. Christian Louboutin peep-toes didn’t miss to peek-a-boo through the thigh high slit.

Like J. Law has a sweet spot for Dior, J. Lo has something similar for Zuhair Murad. This year she chose a naked dress from the designer which was adorned with ivory embroidery and bead details. To further the look she picked up Pomellato jewels. Her hair and makeup were flawless, as always.

The 2015 Golden Globes again saw the actress in a Zuhair Murad gown. The dangling diamond earrings smoked through the loose waves playing at the hair strands, but what we were all digging were the ultra-Smokey eyes. The Jimmy Choo sandals secured her feet at the 72nd Annual Golden Globe Awards.

For once the songstress slips into a Giambattista Valli and ends up looking like Belle from Beauty and the Beast. This mustard gown that she rocked at the Golden Globes 2016 slayed ruthlessly at the red carpet. The Harry Winston diamonds and Jimmy Choo heels joined hands to conspire the extensiveness of the look. Most of the divas play safe at the red carpet by sticking to their favorite designers, but at times a few bold majesties like J.Lo take chances and experiment only to excel. Hollywood have come up a long way in terms of style and fashion and all the 73 years of Golden Globes have seen its evolution. We got a little sneak peek for you.

Vegan Lipsticks For a Beautiful You – It’s Time to Go...

Celebs Struck A Strong Fashion Chord At The Belvedere Studio B...

Take Away Snippets Of Weekend Fashion For Fun And Glamour

Valentine’s Day Beauty Tips: Make Him Fall in Love with You...

Fashionlady - January 13, 2014 0
Love sweet love! It is one of the deepest human emotions that acts as oxygen to get us going even at troubled times. Come...