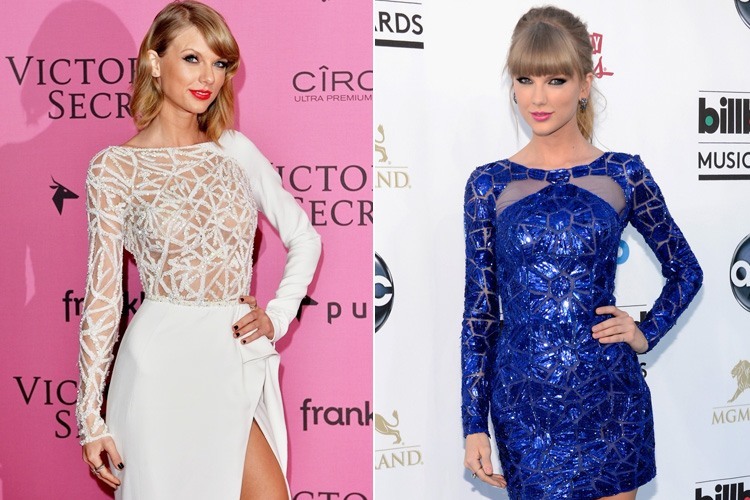 Who is the ten time Grammy award winner and a sensational singer who has quite steadily become a universal superstar? What name comes to mind? Taylor Swift! This lady has done what we each aspire to do so. With deep and heart-touching lyrics and mesmerizing music, her songs are the ones we’re all consistently humming.

But that’s not all she’s managed to establish. This influential chick has managed to create a wardrobe of glamorous and stylish clothes, which each girl desires to own. The Taylor Swift Style technique, by which she mixes and matches up clothes into an alluring ensemble is really worth some appreciation. And what’s the best part that recently all of Taylor Swift’s dresses can just about tied up flawlessly with her lavish red lipstick.

Whether it is the red carpet or a friendly rendezvous with a friend, popstar Taylor Swift’s outfit is always worth glancing at. So let’s get a gist of the Taylor Swift fashion, particularly in shades of blue and white.

1. While attending the Grammy’s for the first time, in the year of 2008, Taylor donned a stunning blue gown by Sandy Spika. She styled her hair with curls and wore light makeup.

2. In the Grammy’s of 2015, Taylor enrobed a turquoise high-low gown created by Elie Saab. The jewelry she bedecked was by Lorraine Schwartz and footwear by Guiseppe Zanotti.

3. To the Academy of Country Music Awards in Texas 2015, Taylor was seen wearing a light blue gown which was very intricately decorated. The gown even had a high slit on one side and cut-outs on it.

4. In the pre-Grammy Gala of 2015, taking place in Osman, the singer was spotted in an Osman jumpsuit of light blue colour. The jumpsuit had white sown on stitches on and the whole look was furbished with light purple footwear.

5. At SNL’s 40th anniversary celebration in Azzaro 2015, Taylor wore a sea blue dress with cut-outs at the waist. This was paired up with heels from Jimmy Choo and Jewelry by Lorraine Schwartz.

6. In the Billboard Music Awards in the year 2013, Taylor put on a Zuhair Murad design little blue dress. Along with this gorgeous textured dress with slits; she teamed up a pair of pencil heels.

7. For the recent 2016 Grammy Awards Taylor Swift had chosen to enrobe a sheen and sparkling off shoulder dark blue gown. The gown brushed against the floor as she walked the red carpet.

3. For her performance in the 2014 Grammy Awards, Taylor was bedecked in a beautiful white dress. The dress was flowy and light, and had a long skirt falling skirt design to it.

4. At the Canadian Country Music Awards, in the year 2012, Taylor was seen donning a cut sleeved, white textured dress. The outfit was a skater dress which appeared to have a lace design.

5. It was at the 39th Annual People’s choice Awards, in 2013, that the singer was observed wearing a white gown, that floored the red carpet. The dress was low cut and fully revealed her cleavage.

6. Taylor posed for the 2014 Victoria’s Secret Fashion Show in her high side slit white gown. The gown swept the floor but what actually turned head was the transparent net bodice of the gown.

7. In the Country Music Awards of 2012 we were greeted by a Taylor Swift dressed in a floor length, fitted white dress. The dress was sleeveless and was spiffed up in designs of metal.

So these were the blue and white enthralling Taylor Swift clothes that accompanied her while she walked the red carpet and succumbed up her ladder of success. She has been mainly enrobing herself in dresses of the hues blue or white, and has been carrying each vestment with utter grace.

[Also Read: Here’s What You Can Learn From Taylor Swift’s Style]

Let’s hope the future outfits Taylor dons to such events are just as unique and enthralling as the former ones.